The Melbourne Storm and Newcastle Knights resume their respective Telstra Premiership campaigns after both sides enjoyed much-needed byes last round – albeit for very different reasons.

The last-placed Knights won their second match of the season in Round 10 followed by a deflating 30-20 loss to the Penrith Panthers in which they relinquished a 14-0 halftime lead.

With several key members of the Storm serving Origin duties, the side was afforded a week off after a challenging early-season schedule, revelling in a triumphant 9-2 record atop the ladder.

While they didn't set the rugby league world alight in their last match, Craig Bellamy's side was characteristically clinical enough to hold off a determined South Sydney side in Perth by a 14-6 score line.

It also remains to be seen if the Storm's State of Origin stars will back up from Wednesday night's gruelling clash, in what is a potential further boost to the Knights' slim chances of a miracle-upset victory.

‌Why the Storm can win: If we were to be honest, there is no reason the Storm shouldn't win. They boast a stronger star-studded line up and enjoy the comforts of playing at home in front of their fans on a Friday night. They are riding a wave of momentum and will welcome back inspirational leader Jesse Bromwich after serving a club-imposed two-game suspension, in addition to their Origin representatives. Billy Slater will also have a point to prove after being controversially snubbed by Queensland Maroons selectors for Game One. The Storm sit on top of the competition boasting a 9-2 record despite sloppy performances at times. After an exhausting start to the season where they have already travelled to Sydney, Brisbane, Perth and Auckland, there's no doubt the week off was an invaluable opportunity for Craig Bellamy's side to recharge the batteries before they enter their clash against the Knights as heavy favourites.

Why the Knights can win: The Knights are a much-improved side in 2017 and have been extremely competitive this season despite sitting last with a 2-9 record. Newcastle has lost by more than 12 points just three times, proving their competitiveness. History shows the Knights have held their own against the Storm. The two sides have split their past six matches, as well as their past four matches at AAMI Park. In fact, in the past 10 contests, the greatest winning margin was 14 points when the Knights won 20-6 in Round 24, 2015 at AAMI Park. In a major boost for the side, they will also welcome back Nathan Ross, Josh Starling and Mitch Barnett. Newcastle fans will also be keeping their fingers crossed that the Storm decide to rest their Origin trio of Cameron Smith, Cooper Cronk and Will Chambers instead of having to back up and play. Smith, Cronk and Chambers face the prospect of facing three games in nine days with Melbourne set to take on premiers Cronulla Sharks in Sydney on June 8. It could be a wise decision for the Storm to rest the trio, which could work in Newcastle's favour.

Key match-up: Jesse Bromwich vs Daniel Saifiti. The Storm welcome back key figure Jesse Bromwich for the first time since Round 9. Bromwich will be motivated to make it up to his teammates after missing the past two matches serving a suspension. His opposite number Daniel Saifiti is in impressive form and his spirited effort was key in the Knights' second win of the season against the Canberra Raiders in Round 10. Saifiti is essential for Newcastle in providing a strong team effort.

‌
The history: Played 36; Storm 21; Knights 15. Melbourne hold the advantage in their head-to-head history. While the two sides have split their past six matches, the Storm have won eight of their past 11 matches since 2011.

What are the odds: There's twice the money on Newcastle in the head-to-head market but it's safe to say the Knights' big price is the reason for that. When it comes to winning margin, Storm 13+ is the best backed, and Melbourne is holding 75 per cent of the money in handicap betting. Latest odds at sportsbet.com.au

NRL.com predicts: It's almost impossible to see the Knights pull off one of the greatest upsets in recent history. It would be hard enough to see them beat Melbourne in Newcastle, let alone at AAMI Park. However, no one expected the Storm to lose against the Gold Coast Titans in Round 10, especially after scoring 36 points in a two-point defeat. That just proves that anything is possible if Melbourne lack focus for the briefest period. The Knights will certainly be ready but they will have their hands full against a side that lacks few weaknesses. Storm by 16. 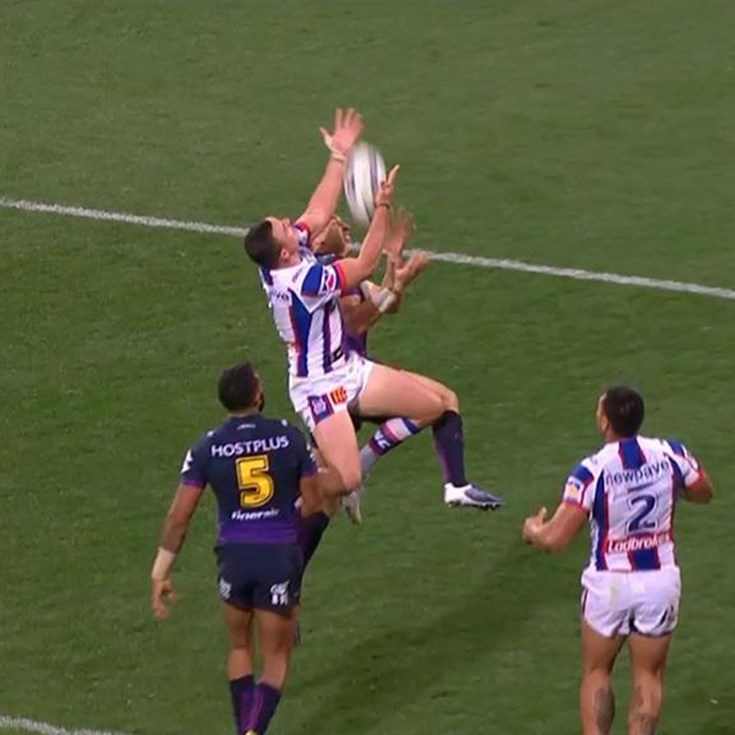