The North Queensland Cowboys have completed a second half comeback against the Gold Coast Titans at 1300SMILES Stadium. Despite an overwhelming glut of possession the Cowboys failed to take the lead into half-time, but had more energy than the Titans in the second stanza, and the visitors simply couldn’t keep up.

‌
Coen Hess continued his huge push for an Origin berth, despite insisting he isn't ready, after scoring a classic second-rower's try, barging over the line at close range. Michael Morgan continued to regain his form, directing the Cowboys around the field throughout the game, notching up a try and an assist.

The home side never gave the Titans a look at their own try line in the first 20 minutes. The control came courtesy of two repeat sets earned off the boot of Jake Granville, as well as errors from the Titans. Despite the possession they were unable to convert the dominance into points, coming within metres on several occasions.

After being let down by the final pass or kick, Michael Morgan eventually found joy, using his runners as decoys, he pushed off a Titans defender to go through close to the posts.

Fatigue turned to ill-discipline for the Titans, as penalties kept the Cowboys in the Titans' half of the field. Gold Coast's first enterprising footy came when Dale Copley and Jarryd Hayne attempted a left-side raid, but the centre was bundled into touch, much to the joy of the home crowd.

Neither the failure nor the fatigue seemed to discourage the Titans, and they went down the right side soon after, and kept the pressure on with a repeat set.

Kyle Feldt wasn't content with the result, and an inch-perfect dropout over the head of Taylor handed possession back to the Cowboys. Another penalty in the tackle for the Cowboys let Kyle Feldt add two more to the tally.

But with the clock ticking down, Ashley Taylor brilliantly found Dale Copley on the inside, before supporting him to score untouched under the posts.  The Cowboys' fourth penalty of the night gave Taylor the opportunity to take the lead into half-time, and he made no mistake, upsetting the Cowboys' 58 per cent of possession to leave the scores 8-6 at half-time.

The first points of the second half came through Hess as he pushed his claim for an Origin spot busting through the Titans' defence with ease to retake the lead for the Cowboys.

With the Titans continuing to give penalties, doubling their half-time tally of four in just 20 minutes, the Cowboys eventually capitalised and Feldt slotted the penalty goal.

The same man added four more just a few minutes later, after capitalising on a Morgan cut-out pass to dive over and plant the ball down in spite of Copley's best efforts to push him over the sideline.

The last points of the game were as cheap as they come, after a rare shot-clock violation with the Titans failing to execute their dropout soon enough, giving a penalty in front of the posts, which the Cowboys used to take another two points. 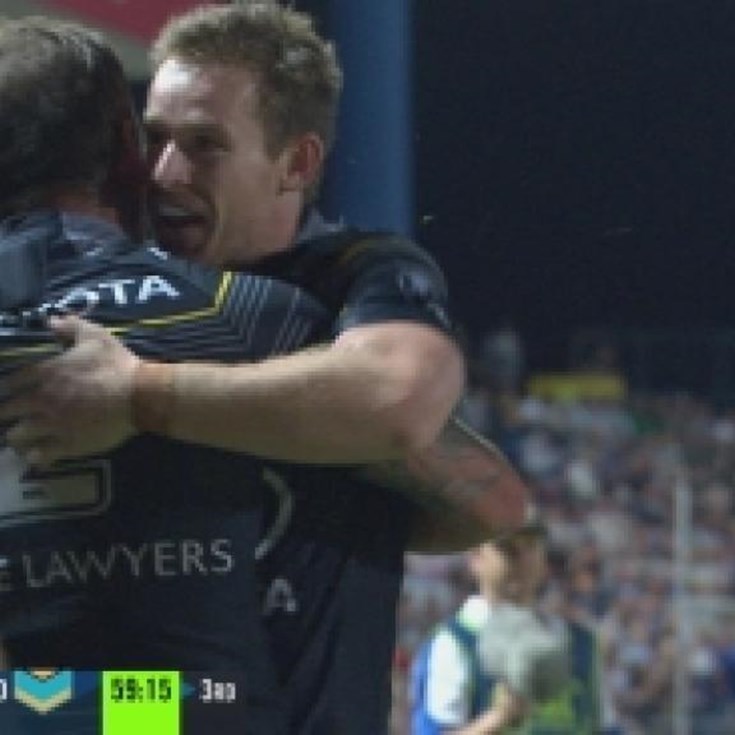