Two tries – the second in controversial circumstances – to former Newcastle favourite son Akuila Uate has helped Manly cling on to an 18-14 win over a determined Knights outfit in torrential rain at Lottoland on Friday night.

Uate's second try – awarded on field without a check from the bunker – should have been overturned for a lost ball, which became crucial after a late Danny Levi try got the Knights back to within a converted try.

‌
The 16th-placed Knights showed plenty of determination to match it with Manly – who climb at least temporarily into the top four – at a ground where they haven't won since 2006.

Newcastle had plenty of attacking ball throughout the game and should have been able to find more points but a number of listless sets and one-out passes gave Manly's stout goal-line defence few headaches.

Another powerful game from enforcer Marty Taupau – who finished with a game-high 207 metres and six tackle busts – laid the platform. Half Daly Cherry-Evans continues to build his right-edge combination with centre Dylan Walker and winger Uate to good effect.

Other than a lack of creativity in attacking zone, the match was a promising one for Newcastle's rookie halves combination with halfback Jaelen Feeney bagging a maiden NRL try at a key moment.

With torrential rain at the start of the match turning the pitch into a mudbowl, the Knights first soaked up a few sets at their own line before opting for a free two points when they got a penalty in Manly territory in the 18th minute.

A head-knock put Newcastle winger Nathan Ross out of the game and before the Knights could properly re-set their defensive line Manly took advantage, with Dylan Walker sending ex-Knights winger Uate over to score in Ross's vacant channel.

A huge amount of the remaining 20 minutes of the half was spent with the Knights camped in Manly territory on the back of a multitude of late-set penalties and Manly errors.

Resolute Manly goal-line defence continually turned away Newcastle's unimaginative set plays but the endless pressure finally told when halfback Jaelen Feeney's grubber bounced off some Manly legs with the No.7 pouncing on the loose ball for his maiden NRL try and an 8-6 half-time lead.

Manly got the try they needed to reclaim the lead 10 minutes after the resumption when Curtis Sironen shrugged through a few defenders to plant the ball down.

Five minutes later Uate was denied a second when the Bunker found he had shoved Brendan Elliott in the back before scoring. He did get his double shortly after though in controversial circumstances; he dived over in the corner after some nice lead-up work from Cherry-Evans and Walker and was awarded the try without video inspection.

However in a huge slice of luck, replays showed Uate lost the ball before he grounded the crucial four-pointer.

In the boggy conditions, against a Manly team defending stoutly, finding another two tries was always going to be a huge ask for the last-placed Knights but hooker Danny Levi – fresh off an HIA check – made it a grandstand finish when he split the line from a dummy half run from 20 out to make it 18-14 with five minutes to play.

A penalty in the set after points followed by a drop-out forced by Feeney heaped some late pressure on Manly but it came undone with a Jacob Saifiti knock-on and Manly were able to hang on to a tense win that sees them – at least temporarily – climb into the top four. 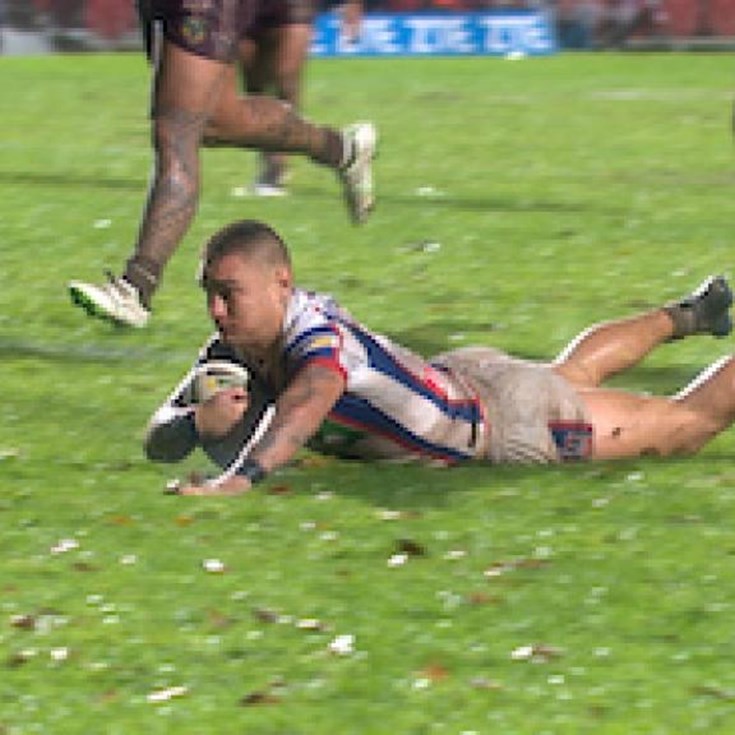