With a casualty ward that makes an episode of Kings Cross ER look positively pedestrian and three of their most influential players sequestered away on representative duty, the Titans will send a team to Sydney to face the Rabbitohs on Friday night that many of their fans would even find unrecognisable.

With their season on the line and a South Sydney team equally desperate to maintain some level of contact with the top eight, the Titans have been installed rank outsiders but need look back only three years to find inspiration.

South Sydney fans have fond recollections of the 2014 season but on a mid-Origin Monday night in July a bit-part team from the Gold Coast came to the big smoke and knocked off the team who would be champions.

The Titans triumphed 14-10 that night scoring three tries to one but they will need a vast improvement on their last start 34-12 loss to the Warriors to push a Rabbitohs team that challenged Brisbane for the entire 80 minutes in their last outing.

Rabbitohs coach Michael Maguire has named the same 17 as they started against the Broncos last week with Tyrell Fuimaono starting in the back row and Kyle Turner on the bench while Titans coach Neil Henry has been forced to make a total of nine changes to the 21-man squad he named last week.

William Zillman starts at fullback for the first time in 12 months, John Olive makes his first appearance for 2017, Chris McQueen has been named at five-eighth, Pat Politoni will make his club debut at hooker and Kevin Proctor returns from a four-game club-imposed suspension in the back row.

On the extended bench there are four players without an NRL game between them but you know what they say: when opportunity knocks…

‌Why the Rabbitohs can win: The mass of changes that the Titans have been forced to make will ensure they bring a simplified game-plan to ANZ Stadium that should play straight into the hands of the Rabbitohs. South Sydney's direct, power-packed approach threatened to upset the Broncos last week and if Tom and George Burgess can provide a similar platform on Friday night there's no way the Titans will be able to quell their momentum. This game in particular will be won in the middle which is where the Rabbitohs love to play it most.

Why the Titans can win: Throughout their 10-year history the Titans have been at their best when expectations are at their lowest and there's no doubt the element of surprise will be on their side. Halfback Ash Taylor will be seen as the captain, first mate and deckhand by the Rabbitohs defence so if Gold Coast can conjure some shock tactics from somewhere they may find an opposition unprepared for it. The other option is to simply play like their season depends on it and out-work a Rabbitohs team also down the ladder and down on confidence.

‌
The history: Played 14; Rabbitohs 8, Titans 6. It's been rare in recent years with the Rabbitohs taking home games to Cairns and Perth that these two teams have met in Sydney but it's an assignment the Titans have performed well in, winning three of the six matches played at ANZ Stadium. Although the Rabbits have a slight edge in the head-to-head record the result is more often than not decided by a narrow margin, with the winning margin in 11 of the 14 games eight points or less. The most recent meeting was a thriller in Perth, where South Sydney trailed 18-0 before forcing golden point where they thought an Adam Reynolds field goal had stolen an unlikely win. The field goal was denied due to an illegal block by Nathan Brown and two minutes later Ashley Taylor was the match-winner for Gold Coast.

What are the odds: The money is running 10-1 in favour of the Rabbitohs in Sportsbet's head-to-head market and South Sydney 13-plus is by far the best supported winning margin. Cody Walker is best backed in the first try-scorer market just ahead of Sam Burgess at big odds. Latest odds at sportsbet.com.au.

NRL.com predicts: Whichever way you look at it this shapes as a comfortable win for the home side. Despite a loss last week the Rabbitohs will be heartened with their showing while the Titans come in after one of their most disappointing performances with a team torn apart by injuries and Origin commitments. Footy's a funny game sometimes but it's South Sydney fans who will be smiling after this one. Rabbitohs by 12 points. 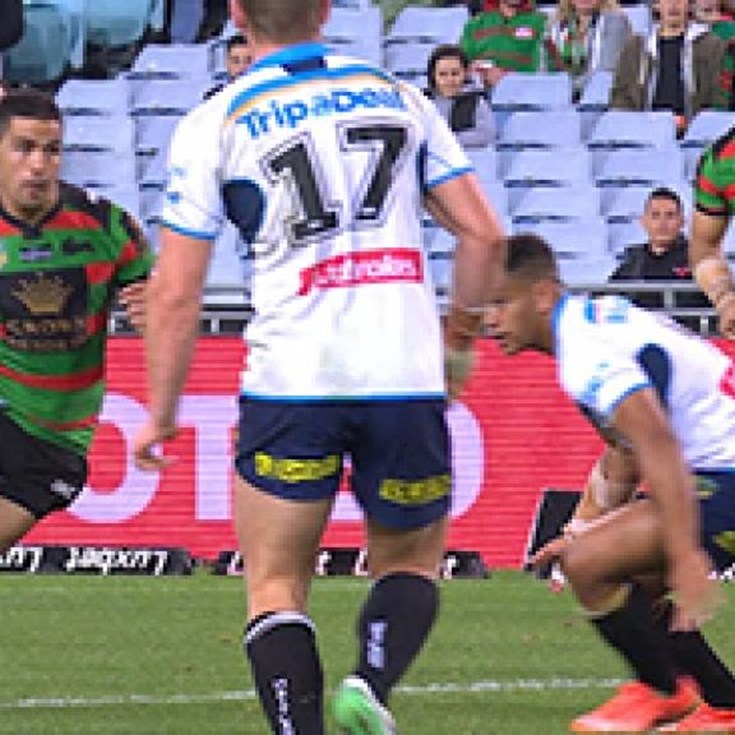