The Titans will take on South Sydney on Friday night very much a one-man band but coach Neil Henry is confident that the extra responsibility will in fact bring the best out in halfback Ashley Taylor.

‌Although Jamal Fogarty was rushed into the 21-man squad on Tuesday and has had a Titans contract registered with the NRL, he didn't train with the team on Thursday morning and won't be making his NRL debut against the Rabbitohs.

It was only a week ago that he was granted a release from the Eels to return home to the Gold Coast and after one game with the Burleigh Bears was called in to help alleviate a casualty ward that has claimed playmakers Kane Elgey and Tyrone Roberts in recent weeks.

By not promoting Fogarty the Titans will start with Chris McQueen at five-eighth, William Zillman at fullback and club debutant Pat Politoni at hooker, leaving Taylor to take complete control of the team's attack and kicking game.

Prominent in the Telstra Premiership's leaders in try assists – thanks largely to his superb kicking game – Taylor has shown signs of the dreaded second year syndrome of late and was well below his best against the Warriors last weekend.

The revolving door of fullbacks used this season and the influence of Jarryd Hayne on set plays may be contributing to performances from Taylor that appear far less dominant than he was last season but Henry says there is no option but to take charge this week with the team's finals aspirations hanging by a thread.

"It is his opportunity to do that and also alleviate a bit of pressure on Pat Politoni coming in, although he's been playing some good footy for Burleigh Bears," Henry said of the two men who will dominate touches of the Steeden on Friday night.

"He was the first to admit his kicking game wasn't great. He kicked one out on the full.

"We didn't really kick to corners and do the best we could with our possession.

"We made a number of unforced errors with the ball and rushed things.

"We didn't mount much pressure on the Warriors."

In the past three weeks Taylor has made four errors and missed 13 tackles and will be a magnet in the Titans' defensive line for a South Sydney team that rarely ventures outside the middle third of the field.

McQueen's role in the No.6 jersey is expected to be little more than shoring up the defensive line and playing a predominantly running role, placing pressure on Politoni to come in in his first NRL game since Round 17, 2015 and just the 13th of his career.

A key figure in Burleigh's Intrust Super Cup title last season, the former Wests Tiger and Shark suffered a broken arm in a trial against the Warriors in February but has a reputation for being unafraid to dish out orders.

"He was great for us in the trial and it was very unfortunate that he broke his arm," said captain Ryan James.

"It's great for him to come back and be in the NRL arena. It's his club debut but he's played NRL before so he's ready to go.

"He came off that premiership winning side last year and he was a major part of their go-forward along with Patty Vaivai.

"Those two have a really good combination and it will be great to see them in the NRL arena."

Winger John Olive will also be making his first NRL appearance of the season against his former club while another former Rabbitoh, Eddy Pettybourne, is playing just his second NRL game since Round 21 last year.

Rabbitohs v Titans: Schick Preview
'He's wanted to play Origin since he was 8'
Copley no stranger to Origin disruption 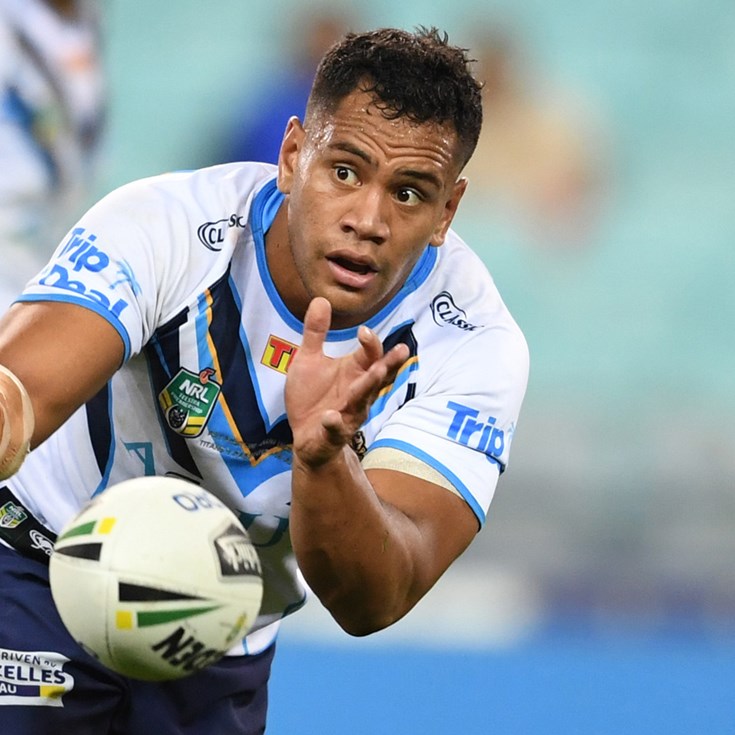