A 78th-minute try to back-rower Jayson Bukuya has handed the Sharks a stunning 24-22 come-from-behind win over a desperately unlucky Wests Tigers side at Southern Cross Group Stadium on Saturday night.

The Tigers looked set to snap their five-game losing streak against a Sharks outfit that was heavily depleted by State of Origin when Malakai Watene-Zelezniak crossed to give them an eight point lead with 10 minutes remaining, but a try to Edrick Lee gave the defending premiers a glimmer of hope which they converted into a remarkable win moments later.

With numbers to the right, Daniel Mortimer opted to go to the short-side instead and delivered the clutch play in his first game as a Shark to grubber from dummy-half for a flying Bukuya to snatch the lead.

It was a cruel blow for Ivan Cleary's men who had been the better side for large portions of what had been a scrappy affair between two teams missing a stack of representative talent.

‌
The night couldn't have started any worse for Ava Seumanufagai with the 100-gamer sent to the sin-bin inside the opening six minutes for a professional foul as the Sharks attempted to take a quick tap.

The Tigers did well to hang on with 12 men on the field but couldn't keep it going with their full complement as Sharks winger Edrick Lee popped a late offload to Kurt Capewell who crashed over for his first try in the NRL.

Any thoughts the Sharks would run away with it were quickly put to bed as stand-in skipper Elijah Taylor charged onto a short ball from debutant Matt Eisenhuth to level things up before Tui Lolohea's conversion gave the visitors the lead.

The Tigers continued to apply plenty of pressure and were rewarded for their efforts when youngster Esan Marsters bustled his way over from dummy-half to make it 12-4 six minutes out from half-time.

A big break by Bukuya to start the second half had fans thinking the Sharks were ready to mount a comeback, but their cheers were quickly replaced by cries of disbelief as Jacob Liddle burrowed over from dummy-half to extend the Tigers' lead.

Just when it looked like the Sharks were dead and buried, a brilliantly-executed inside ball sent Sosaia Feki into a gaping hole before the winger linked up with Chad Townsend who rolled out of Luke Brooks's attempted tackle to get his side back in the contest.

There was nothing pretty about their performance in the first 60 minutes so it came as no surprise that Shane Flanagan's men would strike again through a scrappy bit of play as Capewell bounced and slid his way to the line to draw his side within two points with 18 minutes left on the clock.

It seemed like a matter of when not if the Sharks would hit the front but their second-half fightback was stopped in its tracks as Watene-Zelezniak touched down in the left corner to become the third player to score his maiden NRL try; Lolohea's sideline conversion giving the Tigers a crucial eight-point buffer late in the game.

That conversion would prove telling as the Sharks pegged one back in the 74th minute when Capewell turned provider to send Lee over in the corner before Townsend nailed the shot at goal to cut the gap to two points.

It looked like the Sharks had blown it when Fa'amanu Brown burst into the clear and found Sam Tagataese in support, only for the big man to throw a panicked pass to no one with the line in sight, but his blushes were spared when Mortimer and Bukuya combined to seal Cronulla's 10th win of the season. 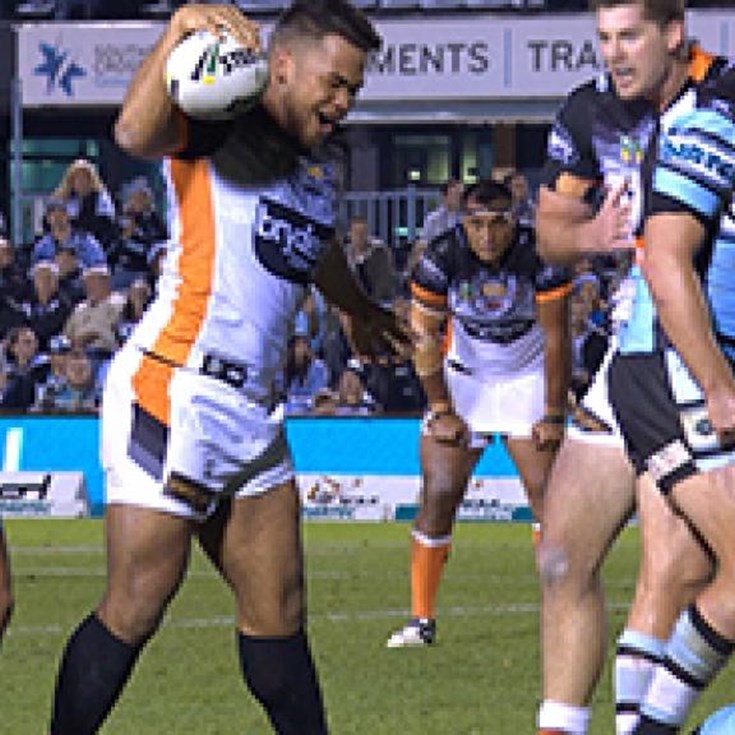