Jarryd Hayne has put a mixed performance for the Blues on Wednesday night behind him to guide the Gold Coast Titans to a 26-14 victory over the Wests Tigers at Campbelltown Stadium.

‌Hayne's return to his hometown was low-key in the opening half before the Titans fullback sparked a second-half onslaught with two tries and an assist in 10 minutes to deliver Ivan Cleary's side with their seventh straight loss.

In a contrast to the sell-out conditions in the corresponding clash last season for Hayne's return, the 6,891 fans in attendance were treated to a special from the former Australian international when he busted through the middle and beat four defenders to go over for a double.

Konrad Hurrell backed up a strong running game against South Sydney a week ago with a two-try effort and further 168 metres, while Nathan Peats put in another industrious effort following Origin II with another 51 tackles.

Earlier in the contest, the Tigers were first to strike when Tui Lolohea and Kevin Naiqama linked up with David Nofoaluma on the right edge who got on the outside of William Zillman and found centre Esan Marsters in support in the eighth minute.

It proved a shaky game from Naiqama at the back with NSW fullback James Tedesco missing for the encounter; the Fijian international had a mixed bag with an error and wayward pass.

Gold Coast struck back in the 19th minute when Hurrell did it all himself from dummy-half to burrow under Moses Suli and Kyle Lovett to get the ball on the chalk.

The visitors were over again five minutes later when NRL debutant Jamal Fogarty provided a pinpoint cutout pass for Dale Copley to draw in David Nofoaluma and send Zillman over in the corner for the first four-pointer of his season.

Nofoaluma ensured he made up for the earlier defensive lapse to link up with Lolohea two minutes before the break and finish off a looping pass from the mid-season recruit.

A couple of dubious calls against the Tigers early in the second half proved costly when Nofoaluma was ruled to have lost the ball despite Joe Greenwood getting a touch earlier from the Ash Taylor kick.

Hayne looked keener to get involved in the second period and the Blues centre provided a quick no-look pass for Hurrell to stroll over for his second of the night.

Taylor's second year in the Telstra Premiership has been below his 2016 standards but the crafty halfback received some luck when he was ruled to have had the ball stripped forward that denied a four-pointer for Malakai Watene-Zelezniak against the run of play.

The Tigers couldn't respond to the call from the match officials with some backchat from skipper Aaron Woods allowing the Titans up field for Hayne to stroll over after a simple backline movement before lighting up the game with his second and take the lead out to three converted tries.

A four-pointer to Sauaso Sue narrowed the deficit with nine minutes remaining, however the gritty Titans defence at the death ensured the visitors would snap a four-game losing streak. 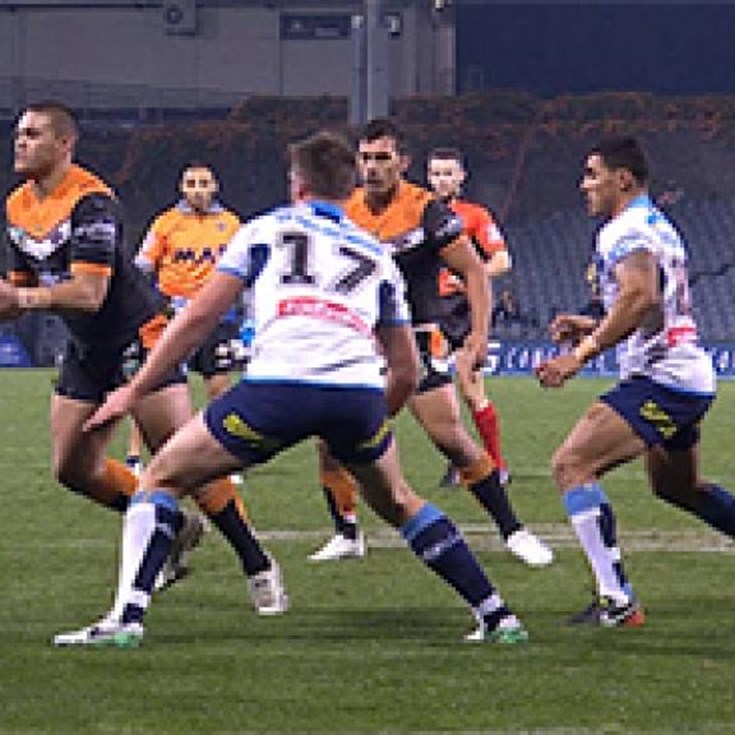