The Warriors made it back-to-back NRL Telstra Premiership victories after grinding past a stubborn Canterbury Bulldogs on Friday night to win 21-14 at Mt Smart Stadium.

Three tries and the accurate boot of Shaun Johnson, both from the tee and in open play, was enough to lift the Warriors to their seventh victory of the year, with the home side losing Issac Luke with a dislocated shoulder in the first half.

Veteran lock Simon Mannering put in a mammoth 80-minute stint for the hosts, carrying for over 150 metres along with 60 tackles, while Johnson effectively restricted the impact of the Canterbury pack with a smart kicking game which meant the visitors spent most of the match on the back foot.

It was the Dogs who struck first after the Warriors infringed while camped on their own line, with Kerrod Holland kicking the opening points of the match.

But five minutes later the Warriors had the lead after an early-set shift resulted in giant winger Ken Maumalo taking the ball 70 metres. After overcoming an initial ankle tap, Maumalo evaded the cover defence for a converted try.

The hosts enjoyed plenty of possession in attacking territory, but twice blew genuine scoring chances, instead having to settle for a penalty in the final minute of the half after Josh Jackson was penalised and sent to the sin bin for a professional foul in front of the sticks.

Those 10 minutes without Jackson proved costly for the visitors, who leaked via a Blake Ayshford try from a Johnson grubber just two minutes into the second period.

Trailing 14-2 with 25 minutes left on the clock, the Dogs finally got over the line when former Warrior Raymond Faitala-Mariner broke would-be tackles from Johnson and Ayshford to power over for his first four-pointer for the club.

Holland added the extras to reduce the gap back to six points, and minutes later Canterbury were denied a second try after Greg Eastwood was ruled to have knocked the ball on over the line.

After missing the chance to extend the lead when David Fusitu'a was found to be offside and inside the 10 as Maumalo scored out wide, the Warriors took it out to a two-score lead with 11 minutes left following a field goal from Johnson.

Both teams traded tries inside the final six minutes, with captain Roger Tuivasa-Sheck punishing the tired Bulldogs defence with a burrowing effort, before Holland crossed and converted from the sideline to leave the final score at 21-14. 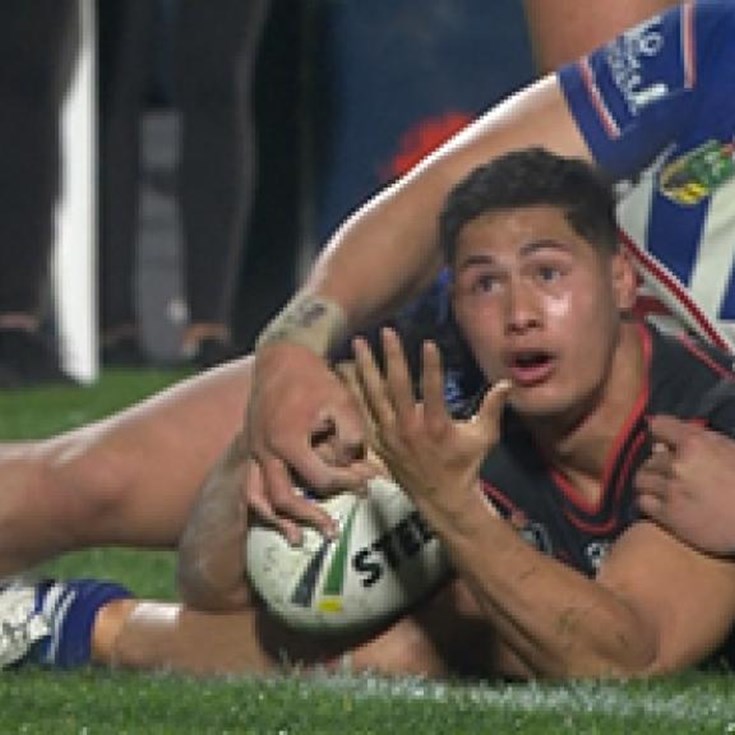 Foran ruled out of Bulldogs clash