The beauty of winning ugly, Hayne bounces back after Origin horror, Tigers miss their 'Teddy' and the cruel nature of a game of inches. Key talking points from Campbelltown Stadium.

‌When winning ugly is a thing of beauty

When you've gone more than a month without experiencing that winning feeling you can begin to wonder whether you'll ever feel it again.

So as ugly as it may have been the Titans' fifth win of the season broke a four-game losing streak and for at least a few seconds after full-time would have felt like the most important win of their careers.

Trailing 4-0 early the Titans hit back to lead 10-4 midway through the first half and did just enough to punish a young Tigers team that were hoping they could break a losing streak of their own as opposed to truly believing they could.

There were basic handling errors, rubbish kicks and terrible options in attack but someone had to win and the Titans had enough class in key positions to put on 16 points in the space of 10 minutes to put the Tigers away.

With an injection of confidence that comes with a win – any win – if they can back it up with a second on the trot at home against the Dragons next Friday night they might start believing they're a good team again.

Hayne bounces back after Origin horror

It may have been an easy kill and the majority of his work came in a 10-minute period but Titans fullback Jarryd Hayne turned around from a horror showing in Origin II to continue his Campbelltown love affair.

Twelve months after his match-winning field goal Hayne returned home and while barely noticeable in the first 40 minutes in the space of 10 minutes in the second half he took ownership of the contest and secured two crucial competition points for his team.

He will drift in and out of games, he might not turn up where he is supposed to at times but if his team needs something special at a crucial juncture Hayne still has the self-belief to take on any challenge and regularly pull it off.

Quick hands close to the Tigers' line gave Konrad Hurrell a clear path to score his second try and then Hayne took matters into his own hands, beating Tigers defenders on the outside for his first and then slicing back through the middle from 30 metres out for his second.

There will always be things about Hayne that infuriate some fans but if he turns up at the right time often enough they'll have little cause for complaint.

Regardless of his talent Kevin Naiqama was always going to be a step down from regular fullback James Tedesco, but there were signs early that the Fijian speedster would bring something different to the position that may have been just as serviceable.

A nice wide pass early created the space for Esan Marsters to cross in the corner but it wouldn't be long before Tigers fans were soon longing for their 'Teddy'.

An awful kick out of dummy-half from Titans hooker Nathan Peats was made to look genius when Naiqama made a terrible blunder trying to rein it in on the first bounce and then on a rare attacking set he sent a pass sailing over the sideline.

His next catch was greeted by a Bronx cheer from the Campbelltown contingent but as hard as he tried he couldn't influence the game in the way that Tedesco can.

Backing up 48 hours after a big effort for the Blues on Wednesday night and with his future elsewhere from 2018, Aaron Woods showed just how much the Tigers still mean to him with an inspirational effort up front.

He was booed by Tigers fans when he announced he was leaving the club at the end of the year; he deserved a standing ovation on Friday night.

A cruel game of inches

When you've lost six games on the trot they are the type of plays that never seem to go your way and it was only a matter of inches that resulted in a 12-point turnaround halfway through the second half.

Attacking the Titans' line a Tigers pass went to ground and was gathered in by Anthony Don who sent Ash Taylor on a scamper. As the defence collected him the ball came free and Malakai Watene-Zelezniak ran 40 metres to score what the on-field referees deemed was a fair try.

But upon closer inspection the Bunker correctly ruled that a strip backwards from Watene-Zelezniak had bounced off the leg of his teammate and back into his arms in an offside position.

Hayne scored the first of his two tries from the next set, added another four minutes later and put the result beyond doubt.

Who knows what might have happened had that loose ball bounced backwards instead of marginally forward. 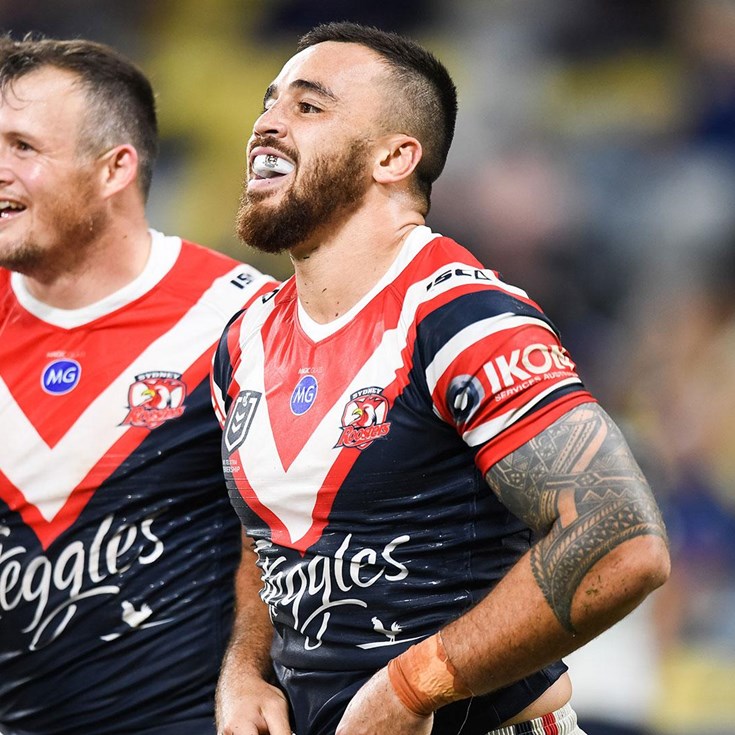 Every try from round 8