An extra-time field goal from Parramatta halfback Mitch Moses has helped the Eels down Canterbury in a grinding 13-12 affair at ANZ Stadium on Thursday night.

The play was not without its controversy, with a marginal stripping penalty against Canterbury rake Michael Lichaa getting the Eels into field goal range early on in extra time, but it was a fine strike to cap an excellent game for the Eels' mid-season recruit who defended as well as he has all year and formed a wonderful kicking combination with halves partner Corey Norman.

Moses was a threat all night with his running and passing game while lock Nathan Brown was immense, playing all 82 minutes for a monumental 237 metres and 42 tackles.

He was matched by Dogs skipper Aiden Tolman who played all 82 minutes in the front row for the Dogs on his way to 129 metres and 53 tackles.

The Eels looked like blowing the game away after a two-tries-to-nil first half against a Dogs side that looked like it had no idea how it was going to score points but Des Hasler's men came roaring back in the second on the strength of a powerful and disciplined defensive display.

The match started poorly for Canterbury with fullback Will Hopoate throwing a wild pass on a kick return that evaded winger Marcelo Montoya. In attempting to stop Moses planting down for an easy try he bumped the Eels pivot away from the ball and found himself in the sin-bin in just the third minute.

The Eels strangely took the two points against a 12-man defensive line and were unable to capitalise in the 10 minutes Montoya was off the field; a Moses Mbye penalty allowed the Dogs to square up and start again.

A breathtaking piece of individual brilliance from Bevan French – who chipped ahead for himself down the right touch-line and showed blinding pace to regather and score – stretched Parramatta's lead to 8-2 after 23 minutes.

A few penalties allowed the Eels to camp on the Dogs line and a well-worked overlap play on the left utilising plenty of decoy runners saw Semi Radradra stroll over for a 12-2 lead that the team took into the sheds at half-time.

The Dogs desperately needed some inspiration to get back in the game and they got a fair leg-up from their opponents as three back-to-back penalties piggy-backed them in range before an ill-judged intercept attempt from Kenny Edwards right when the Eels were set to get the ball back handed the Dogs yet another set.

This time the Morris twins combined to cash in on a left-edge overlap for 12-6 with half an hour to play.

From there followed a half-hour period in which the Eels did not play the balls once in the Bulldogs' 20 and barely got out of their own half as they were forced to defend set after set on their own line as an error-free Canterbury put in some muscular defence to keep the Eels pinned well within their own territory.

The pressure eventually told as bench half Matt Frawley dummied his way through some tired defence in front of the sticks to tie the game up at 12-all with 10 minutes to go.

Neither team was able to get into good enough range for a field goal in a frantic final 10 minutes with Moses's long-range attempt shortly before full-time falling well short and the game sent to golden point extra time.

In the first set of the extra period, the ball came free from Tepai Moeroa's grasp under the attention of Sam Kasiano and Lichaa with the officials blowing a penalty that got the home side in range for Moses's ice-cold strike to clinch a vital two competition points that shores up their top-eight billing and all but ends Canterbury's 2017 hopes. 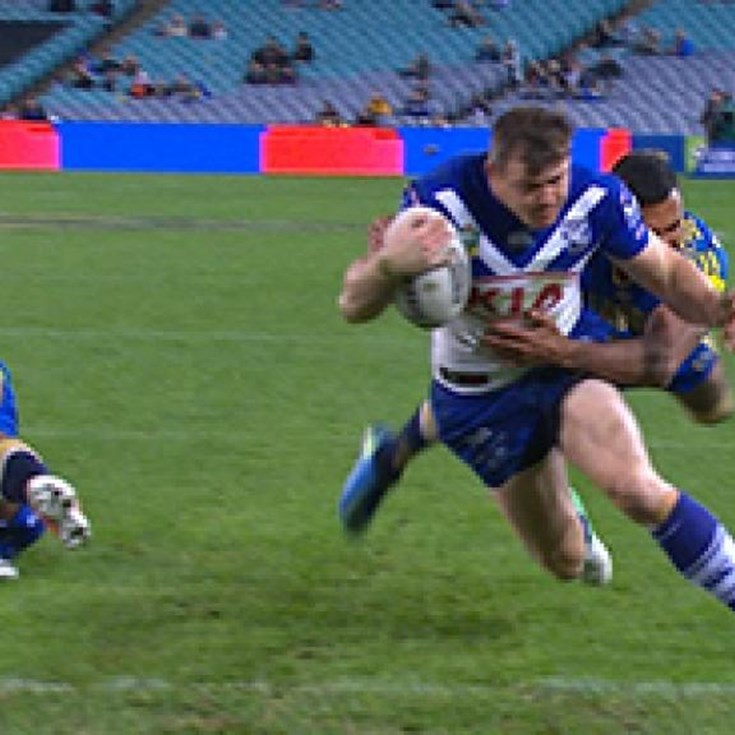