Despite the temperature sitting at an icy sub-zero, the Cowboys have systematically dismantled the Canberra Raiders with Michael Morgan showing that he is a worthy candidate for Johnathan Thurston's vacant Queensland jersey, engineering the destruction and controlling the game to near-perfection.

The five-eighth orchestrated two tries while scoring two of his own. Te Maire Martin had a happy club debut, scoring two tries and contributing in attack and defence.

‌
The Raiders got off to an ideal start, drawing a penalty for a strip against Morgan, before a Blake Austin grubber came into the hands of Elliot Whitehead after the video referee ruled his teammate Jordan Rapana had not knocked the ball on in the lead-up to the try.

The Cowboys eventually got possession and Morgan's game control quickly took a toll on the Raiders. The Cowboys made good use of an attacking set earned from a Canberra knock-on, with Morgan offloading on fifth tackle to Cowboys debutant Martin to go over untouched to post first points for the Cowboys.

Morgan kept the pressure on with his kicking game, and a knock-on from Raiders fullback Jack Wighton earned the Cowboys another set on their line. They soon added another two points through a penalty goal.

It proved to be the right decision, as the Cowboys rolled up the field and forced another knock-on to start a consecutive set 10 metres out from the Raiders' line. Jarrod Croker was forced from the field after consecutive heavy contacts with Cowboys players Justin O'Neill and Lachlan Coote, before Morgan used his grubber kick to force another repeat set. It came to naught as Kyle Feldt was prevented from repeating his aerial heroics from Round 16.

A lift in intensity from the Raiders looked to shift momentum in the home team's favour, before a strong tackle from Coen Hess on Joseph Leilua forced a knock-on, stalling the Raiders' run up the field. Morgan's boot proved to be the difference again, this time finding a bat-back from Gavin Cooper for John Asiata to pass outside to Antonio Winterstein who carried a Raiders' defender over the line to stretch the Cowboys' lead to six.

A fumble on the stroke of halftime was recovered beautifully by Lachlan Coote, as the Cowboys' fullback snapped a field goal to take a seven point lead into the sheds at halftime.

The Raiders once again got off to a flying start, working their way into the Cowboys' half by driving Feldt into touch. Sharp offloads from the Raiders tore the visitors open several times, before Soliola ran onto the final pass and charged over the line to bring the Raiders within one point of the Cowboys after the successful conversion.

The Raiders couldn’t maintain the pressure, despite falling back into the arm-wrestle, and when Aiden Seizer knocked on the Cowboys took full advantage, finally claiming the points after an offload from a storming Taumalolo found Ben Hampton and then a charging Morgan who scored under the posts.

A brilliant set from the Cowboys planted the Raiders firmly in their own 10 metre zone, and the Cowboys followed it up it up with a punishing defensive set. The field position proved too much for the tired Raiders, and Michael Morgan grubbered for himself, grounding the ball to make it a double and bring the Cowboys' lead to 13.

Despite repeated errors the Raiders clawed their way back into the game, with Nick Cotric slicing through the Cowboys' middle to bring Canberra's deficit back to seven.

The apparent resurgence from the Raiders was quickly put to bed, once again by Morgan. In a show-and-go ripped right from Thurston's playbook, the halfback busted through and popped the ball up late for Martin to go over for his second. Joseph Leilua was sent to the sin-bin late in the contest for striking with a forearm to cap a horrible night for the Raiders.

The win makes it two in a row for the Cowboys, while the Raiders were unable to stop their slide down the ladder as finals draw closer. 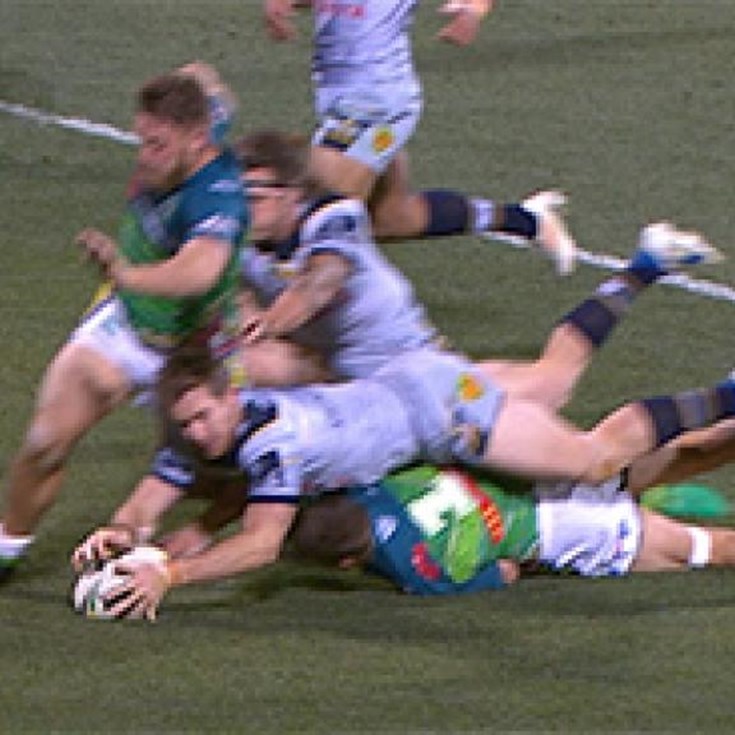