The Manly Sea Eagles overcame an early 16-0 deficit to come back and edge past the Warriors 26-22 in a thrilling NRL Telstra Premiership encounter on Saturday night. Here are the five major talking points to come out of the match at nib Stadium in Perth.

Daly Cherry-Evans can sleep well tonight knowing he has done everything in his power to ensure he adds to his six Queensland State of Origin caps.

In Perth the Manly skipper only enhanced calls for his inclusion for the Maroons in Game Three, laying on two tries, one following a clever line break, and steering his side around the park with class.

In defence he handled plenty of attention from the Warriors to make 28 tackles with only two misses, and the No.7 was arguably the best player on the park at nib Stadium.

It remains to be seen if 'DCE' will be the man Kevin Walters calls on to fill the void created by Johnathan Thurston's injury, but Cherry-Evans has put himself in the best possible position.

"I hope I have [done enough], because I certainly want to be there. Only time will tell. I will certainly have my phone on me on Monday," Cherry-Evans said post-match.

For most of the Round 17 encounter the Warriors footed it with, and at times got the better of, a genuine top-four side in the shape of the Sea Eagles.

In the aftermath it's likely to be a huge positive for coach Stephen Kearney to take out of the loss, particularly given the way they dominated proceedings in the opening exchanges and turned their opportunities into three tries in less than 20 minutes.

The Kiwi side finished the match having completed 86 per cent of their sets, with only seven errors and 24 missed tackles.

Crucially they also matched it with Manly in the middle battle, running for almost exactly the same number of total metres and successfully containing the impact of the likes of Martin Taupau.

Following the match Cherry-Evans was full of praise for his opponents.

"That's certainly not the Warriors' season done, they are playing some great footy."

Heading into Saturday's match the Sea Eagles had scored more tries through the middle of the park than any other team in the NRL, and after 40 minutes it was once again clear why they dominate that particular stat category.

Manly scored three long-range tries through the heart of the Warriors' defence in the first half, with Apisai Koroisau and Cherry-Evans generating the opportunities with their clever vision and athletic plays, and the likes of Tom Trbojevic putting himself in the frame to finish it off.

With their skill players showing so much confidence, Manly can become the ultimate attacking force if they continue to threaten through the middle of the field.

The dropped two points won't be the only concern for coach Kearney at the conclusion of Round 17, with a couple of potentially serious injuries suffered against the Sea Eagles.

Interchange prop Albert Vete broke his arm in the first half and is facing a lengthy stint on the sidelines, further stretching the club's already depleted front-row stocks.

The Warriors could also be without both of their top hookers come Round 19 against the Penrith Panthers, after Nathaniel Roache broke down with what appeared to be a hamstring injury late in the match.

It comes after the Warriors lost Issac Luke to a dislocated shoulder last week, while they look set to be without veteran forward Ryan Hoffman for over a month after he picked up a suspected broken foot prior to the Manly game.

For the second week in a row Shaun Johnson was his side's best performer, leading the way with a balanced attacking game and another strong kicking performance in general play.

Johnson forced three repeat sets, laid on the opening two tries of the match and broke the line twice, very nearly orchestrating the winning play in the final two minutes with a solo run which saw him beat a number of defenders.

So often criticised for his perceived inability to manage a game, 'SJ' deserves plenty of credit for the way he has led the Warriors around the park in the last fortnight. 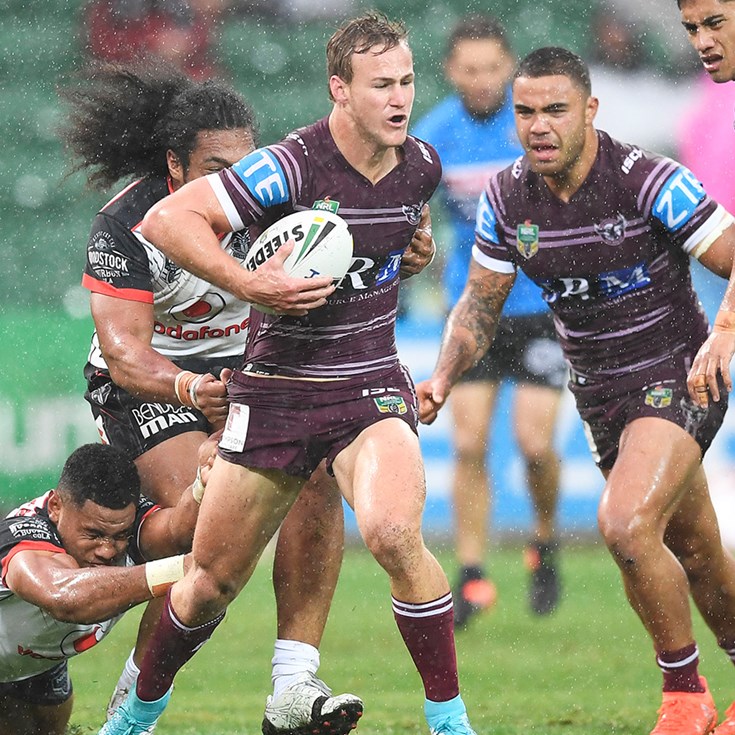