Titans winger Anthony Don has declared that Jarryd Hayne is playing his best football since returning to rugby league as the superstar fullback begins to make good on the massive investment made to bring him to the Gold Coast.

Stinging from a sub-standard performance in Origin II, Hayne has stamped his class on in the Titans' two games since, scoring two tries, making three line breaks and putting on two try assists to prove the difference in wins over the Wests Tigers and Dragons.

The four competition points combined with next weekend's bye will not only lift the Titans' position on the Telstra Premiership ladder but also the confidence permeating throughout the team as a near full-strength side gathers momentum.

‌Although he was only officially credited with the try assist for Don's third try against St George Illawarra – a cut-out pass across two Titans that gave Don space on the right wing – it was Hayne's short no-look pass to Konrad Hurrell in the first half that created the opportunity for Don to score his second of the night.

With the 'Hayne Plane' returning to near the heights of 2014, the Titans' right side has been responsible for seven of the eight tries the team has scored in the past fortnight and given their flailing season more than a glimmer of hope.

After an injury-disrupted start to the year where an ankle injury kept him out for five weeks Hayne spent a month playing in the centres, a position Don doesn't expect to see him playing again for the remainder of 2017.

"I really do think that he's making the fullback position his own," Don said.

"He's stringing some games together and he's definitely playing the best that he has so far for us.

"He's doing good things on both sides of the ball in attack and defence and it's a pleasure to play outside him just because he puts some nice tries on for you.

"I've got a pretty easy job on the end of the line, I've just got to time my run. I know that 'Haynesy' is one of the best fullbacks with his passing game because if they don't check in he's going to run himself and score. And we've got Koni there too who they need to commit to otherwise he'll score.

"It's a real team effort and Haynesy has got the ability to throw the cut-out or play short or run.

"As an edge against the Tigers last week we were really good in attack and we've been working hard on it in the time that 'Haynesy' has been with us over the past month or so.

"Koni's been doing a really good job and Kevin Proctor is laying a line which is just as important as what we do on the end of it.

"It's a privilege to play on the end of the line outside those guys."

‌
Battling a virus coming into the game, Hayne did spend some time against the Dragons on the left wing, interchanging with William Zillman, but registered his highest number of kick return metres (89) despite the Dragons' practice of kicking high to reduce the space he had with which to run.

While his energy levels may have been down coach Neil Henry conceded that Hayne's touches of class is the difference in turning opportunities into points.

"What you saw was a couple of nice touches for points," Henry said. "He has got a good sense for a quick pass and an accurate pass.

"The long cut-out to Anthony when he ran around and went under the posts, he's got a lot of skill to do that.

"He does have a kick as well, he can thread the ball through and he's a big body in the line.

"He wasn't overly involved. They did land some kicks on top of him, they were trying to really get the contact to him so he couldn't run so we were a bit limited on our kick returns.

"He adds that bit of x-factor, a bit of polish on the end of our plays and he certainly did that tonight."

After struggling to find the right mix early in the season Hayne's presence now seems to be more of an empowering one rather than intimidating for young half Ashley Taylor who says they have worked hard to make more of chances to attack down short sides.

"We worked really hard on that at training because we felt like we were missing opportunities in the game where we could run shape and that's what we did tonight," Taylor told NRL.com.

"We had our run shape and we ran off the back of it and got away with a few lucky tries there.

"That all comes down to our preparation and wanting to win the game." 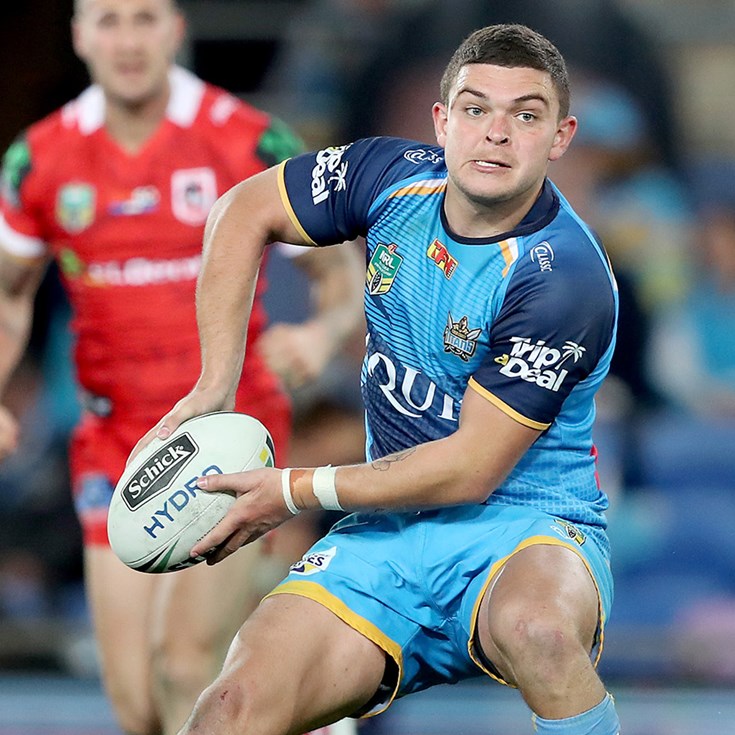