The Maroons may be leaning towards an all-Storm spine for Game Three but halfback Cooper Cronk has given his full support to Michael Morgan's claims after giving him a Kangaroo camp pep talk encouraging him to take ownership of his Cowboys club team.

With Johnathan Thurston's injury woes in 2017 that has culminated in a premature end to his season, the spotlight for the Cowboys' fortunes has fallen onto Morgan and it was at the urging of Cronk that convinced him to accept more of the playmaking responsibility.

Queensland are expected to announce whether it is Morgan or Cameron Munster who will inherit Thurston's No.6 jersey in the decider at Suncorp Stadium next Wednesday ahead of their first full training session on Thursday morning, with the other to line up one spot further out at left centre.

On Tuesday Queensland captain Cameron Smith gave his endorsement to his Storm teammate Munster but Cronk said that Morgan has shown in the past month that he can be a dominant half at the top level.

‌
"'Morgs' is quite a reserved, shy and humble kid from Queensland and for him to step up and be the halfback, you need to be dominant," Cronk said on Wednesday. "You need to have a personality that's a bit outward.

"I remember John [Thurston] having a conversation with me in the Australian camp and basically I just said, 'You're one of the best 17 players in this country, when you go back [to the Cowboys] ask for the responsibility and do that.'

"Then I showed him a couple of technical things and to his credit he's gone back and done that. He's apparently had a conversation with Paul Green and his game level of performance has risen with the responsibility he's been given.

"The kid can play, he can play under pressure, his personality suits it, he's got good composure and there's no doubt whatever jersey he wears I have absolute faith in him."

Game Two was the second and last time that Morgan got to play alongside the 'fab four' of Thurston, Cronk, Smith and Billy Slater and told NRL.com that he learns something new from each of them every time he is in Maroons camp.

"I still learn a lot a lot off those guys," Morgan said. "Listening to them talk about numbers in the defensive line and where to play. I still pick up things here and there.

"They're all very smart players, the way they can look at a team with the shape of the defence that's in front of them and pick at who to go to with the ball or who to play on.

"They all have their own ideas but they're able to gel very well and come up with a way to combat certain things.

"You learn a lot away from footy, the things they do to look after themselves. You won't see anyone with a better diet than Cooper, little things like that, and the way they prepare for a game."

‌
Despite the loss of the match-winning capabilities that Thurston once again displayed in Game Two to keep the series alive, Cronk is excited about the two skill sets that Munster and Morgan will both bring to the starting team.

Defensively it would seem to make more sense for the bigger body in Morgan to defend out wider opposite Blues centre Josh Dugan but Cronk suggested that both will be given an opportunity to showcase their abundant skills.

"There's no doubt Johnathan is one of the premier players in the game and we'll miss certain aspects that he brings to a football team but on the flipside there's a percentage of the things that both 'Morgs' and Munster can bring to a football team that John can't," said Cronk, who will play his 22nd and potentially last game for Queensland next Wednesday.

"We need to take their skills into account. We need to make sure that they're fully flexible within the structures that we play but we need to bring those guys on and let them do what they do best.

"Hopefully it brings another dimension to our attack on Wednesday night." 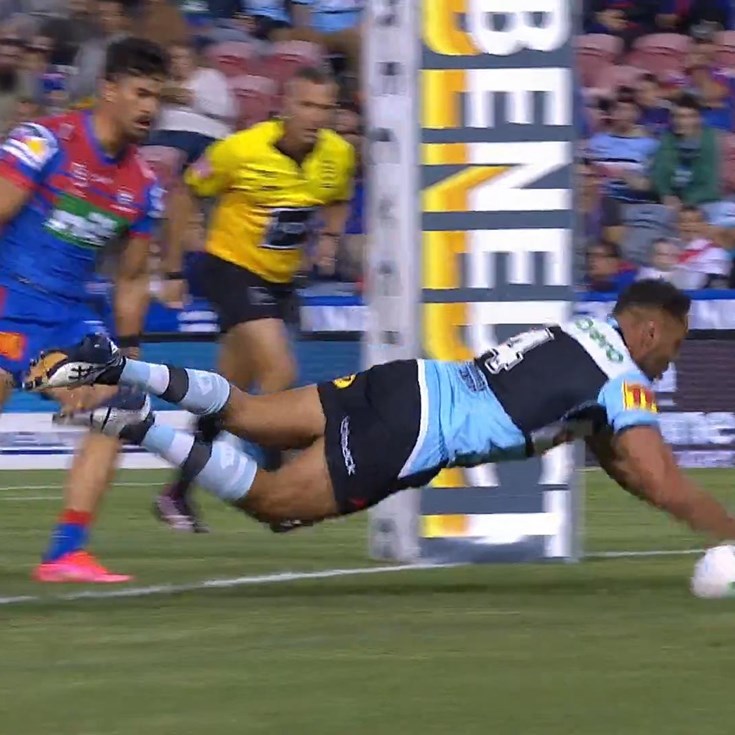 Ponga pierces the line on the left

Presented By Chemist Warehouse 30 mins ago
02:46