The larrikin from Ipswich has been replaced by the intense coach of an Origin team but former Maroons great Brent Tate believes the "brutal honesty" that Queensland coach Kevin Walters has displayed this year has his team in position for one of their state's greatest triumphs.

From the press conference on Monday to announce the team for Game Three to his authoritative message at the team's first training session on Tuesday the strength of Walters' persona as a coach have been on full display.

In a period of transition for the Maroons, Walters has been forced to do without Greg Inglis, Matt Scott, Johnathan Thurston and Darius Boyd this series and called upon six rookies to rescue the situation after a record loss in Game One.

Writing in this week's issue of Big League, Tate says that it was Walters' ability to recognise he had made some selection errors for the opening game that has enabled him and his coaching staff and players to push the series to a decider at Suncorp Stadium next Wednesday.

"Coach Kevin Walters has been under a fair bit of pressure and I think he's done a really good job so far," Tate writes in the Round 18 issue of Big League.

"There have been some huge changes over the past 12 months and he's done really well to stabilise the team.

"The wonderful thing about Walters is his brutal honesty. He recognised that he made a few selection mistakes in the opening game and he admitted it by not shying away.

"He made the changes for the second game and we all saw what happened.

"They were big changes to make and they paid off.

"Next Wednesday night's State of Origin decider at Suncorp Stadium is set up to be a classic match. If Queensland win, I think it'll be one of their greatest ever series victories."

The biggest selection controversy for Game Three came not from the selection of debutant Cameron Munster but that of Ben Hunt ahead of Daly Cherry-Evans on the bench.

While Hunt had a one-game stint in the Intrust Super Cup, Cherry-Evans has been one of the form players of the Telstra Premiership but Tate supported Walters' decision to go with the Broncos' No.7.

"When I first saw the team I thought it was a bit funny leaving halfback Daly Cherry-Evans out, but you can understand why the selectors made that decision," Tate says. "As Kevin Walters said, if you're not going to start him, there's probably no point in having him there.

"Brisbane halfback Ben Hunt will add some spark off the interchange bench. With tired forwards in Origin, you'd rather be tackling Cherry-Evans than Hunt. At the end of a half you don't want to be facing a player like Hunt – you don't want him coming at you.

"Hunt will have the role of just running the ball. You can put him in a position like lock and tell him to get his hands on the ball and keep busy.

"He'll be given a pretty simple task – get his hands on the ball and run. At the end of the day that's his real strength and I can see why they've gone with him on the bench."

The Round 18 issue of Big League features an emotional Josh Reynolds ahead of his farewell to Belmore, how Roosters youngster Ryan Matterson is coping with a shift into the forward pack, Corey Harawira-Naera's rapid rise through the Panthers ranks and the top eight career revivals. On sale now at newsagents, supermarkets, at the ground and via www.magsonline.com.au/big-league. 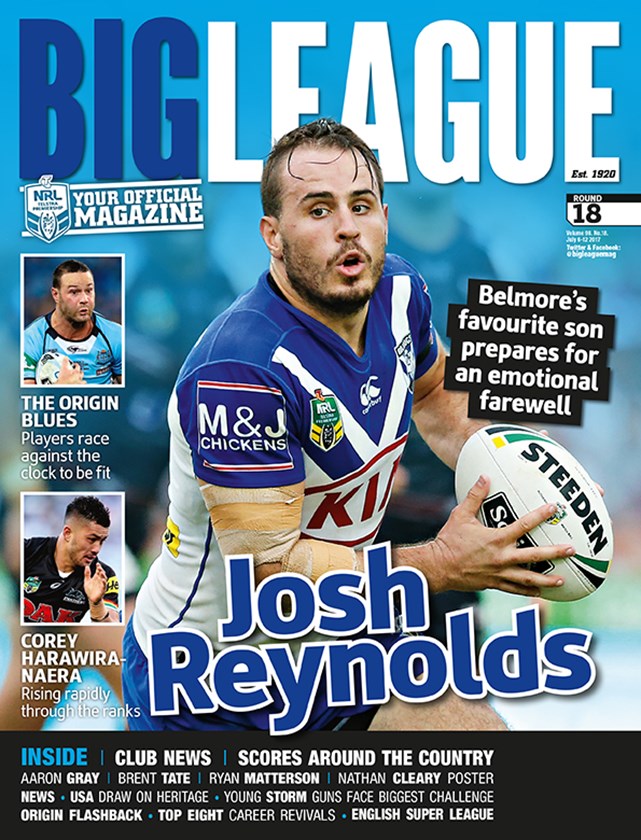