The Parramatta Eels scored their third-consecutive win with an impressive 22-6 victory over the league-leading Melbourne Storm, who were missing their six Origin stars.

Jumping out to a commanding 16-0 lead midway through the first half, the Eels claimed the valuable two competition points to re-establish a four-point buffer within the top eight and ignite their finals dream.

Sans skipper Cameron Smith, Cooper Cronk, Billy Slater, Will Chambers, Tim Glasby and Cameron Munster, Melbourne fought admirably but missed their experienced leaders as the visitors took advantage of the vulnerable home side and forced them to work off their own try line all match long.

‌
The Eels seized a dominating 16-6 half-time lead after capitalising on an extra-man advantage when Suliasi Vunivalu was sin-binned after 10 minutes for a professional foul.

Parramatta jumped the Storm early as Bevan French opened the scoring in the fourth minute before he set up his side’s second try as he chip-kicked inside for Mitchell Moses to cross under the posts.

Semi Radradra then extended the Eels’ lead as he barged over his opposite Fijian number Vunivalu to crash over in the left corner.

To the Storm's credit, the deficit could’ve been greater than 16 points but Melbourne held on despite the early onslaught by the visitors and Vunivalu made amends two minutes before half-time by setting up Jahrome Hughes under the posts with a crafty infield kick as he raced down the sideline.

Both sides came close to scoring multiple times for the following 30 minutes but it was Parramatta who scored the essential opening second-half try, with 10 minutes remaining.

Clinton Gutherson was the beneficiary of a right-side movement to score in the right corner and seal a vital win for his team to consolidate their top-eight position.

The Storm defended the line admirably and were forced to make 393 tackles to 346 but after the Eels relentlessly pressured their defence, they couldn’t hold on in their fourth loss of the season.

Lock Nathan Brown was sensational for Parramatta, who ran for over 200 metres in a match-high from 25 runs along with 45 tackles before he was taken from the field for concussion tests.

The Storm will await further test results after Cheyse Blair left the field in the first half and returned to the sideline with crutches. 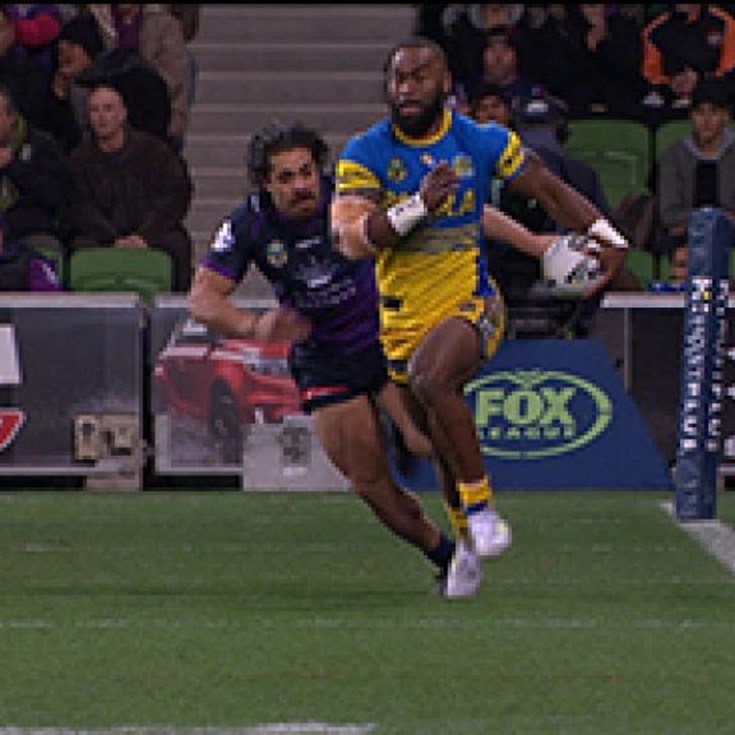