Sure, it's no Broncos-Cowboys series of golden point epics but somehow the meetings of the Titans and the Sharks have become among the most compelling clashes in the Telstra Premiership in recent years.

A rivalry that for many years was simply built up as a confrontation between the Blues brothers Paul Gallen and Greg Bird – who are as close as they are competitive – the Titans-Sharks showdowns have delivered some incredible finishes despite their often disparate position on the table.

In their most recent clash the defending premiers appeared to be cruising to a win in Round 8 on their home turf before an unlikely hero emerged for the Titans in the form of Leivaha Pulu who came off the bench to score two tries in the last 13 minutes and seal a 16-12 win.

In 2016 the most inexperienced NRL halves pairing in five years – Ashley Taylor and debutant Cameron Cullen – edged the Titans in front 18-14 before the Sharks came home over the top and then in Round 21 nine missed shots at field goal saw Cronulla's club record 15-game winning streak come to an end with an 18-all draw on the Gold Coast.

It was the second game in succession that the Titans and Sharks had gone to golden point with Aidan Sezer's missed conversion giving Valentine Holmes the chance to win it for Cronulla in extra time in Round 10, 2015 after a James Roberts intercept in the dying seconds saw the Titans squeeze home 24-22 just six weeks earlier.

Given the nature of their contests in recent times the Titans carry with them a strong sense of confidence that has been bolstered by wins over the Wests Tigers and Dragons heading into last weekend's bye.

The truth of the matter is that they have won just one of their past four games against the Sharks but desperately need another to keep their slim finals hopes alive.

Already six points adrift of eighth-placed Parramatta, the Titans are already in the position of needing to win virtually all of their remaining games and hope that other results also fall their way.

The Sharks on the other hand are well positioned to give a strong defence of their title with eight games still to play, breaking out of something of a lacklustre period that culminated in their Round 16 loss to Manly with their best win of the year against the Roosters last start.

The Origin representatives for each team will have three days to nurse their bumps and bruises with Jarrod Wallace, Jarryd Hayne and Nathan Peats just as important to the Titans as James Maloney, Wade Graham, Andrew Fifita, Jack Bird and Valentine Holmes are to the Sharks.

Still without Kane Elgey and Chris McQueen, Titans coach Neil Henry has included Karl Lawton and Leivaha Pulu on his extended bench while the Sharks have promoted Kurt Capewell to the interchange bench and included James Segeyaro among the extended reserves.

‌Why the Titans can win: Desperate times call for desperate measures and with the potential to lose touch with the top eight completely should they lose another game, now the Titans need to carry the momentum forward from a two-game winning streak prior to the bye and claim another big scalp. With wins over the Sharks, Storm and Dragons already this season the Titans have shown that when they field close to their best side they can compete with anyone. Knock off the defending premiers for a second time in a season and that belief will grow even further.

Why the Sharks can win: Through 16 weeks of the 2017 season the Sharks languished in 15th place in terms of completion rates yet managed to keep winning right up until the Sea Eagles gave them a touch up and punished them for a 65 per cent completion rate. That seemed to finally shock the Sharks into action and on the back of an 89 per cent completion rate – including a perfect 20 from 20 in the first half – they spanked fellow top four front-runners the Roosters to the tune of 44-12. If they turn up in a similar mindset on Saturday the Titans will struggle to go with them.

‌
History: Played 16; Titans 7, Sharks 8, 1 draw. The history between the Sharks and Titans has been close – as we have detailed above – but before the introduction of the Titans Cronulla had the wood over Gold Coast teams in very decisive fashion. In 14 games against the Giants/Seagulls/Chargers the Sharks lost only once – in Round 21, 1989 when Mark Gee scored the only try for the Giants in their 8-4 win at Chris Cunningham Field, a game that featured 23 scrums and 16 penalties and was played in front of 4,100 people. The first time Cronulla played on the Gold Coast was against the Giants in Round 3, 1988 and they very nearly gifted the new boys their first win, a field goal from centre David Burnes allowing the Sharks to escape with a 13-12 win.

What are the odds: Titans $2.40, Sharks $1.58. Sportsbet customers are loving the value available on the Titans. Nearly triple the money has gone on Gold Coast in the head-to-head market, however Cronulla 1-12 is actually the most popular winning margin. Latest odds at sportsbet.com.au.

NRL.com predicts: Any Origin injuries have the potential to completely change the complexion of this game but if the eight Origin stars from these clubs all take their place the Sharks should have too much firepower and class down the stretch. The Titans have shown themselves to be a very capable unit when they have had a continuity of personnel but the Sharks suddenly have a look about them that they believe they can go back-to-back. Cronulla by eight points. 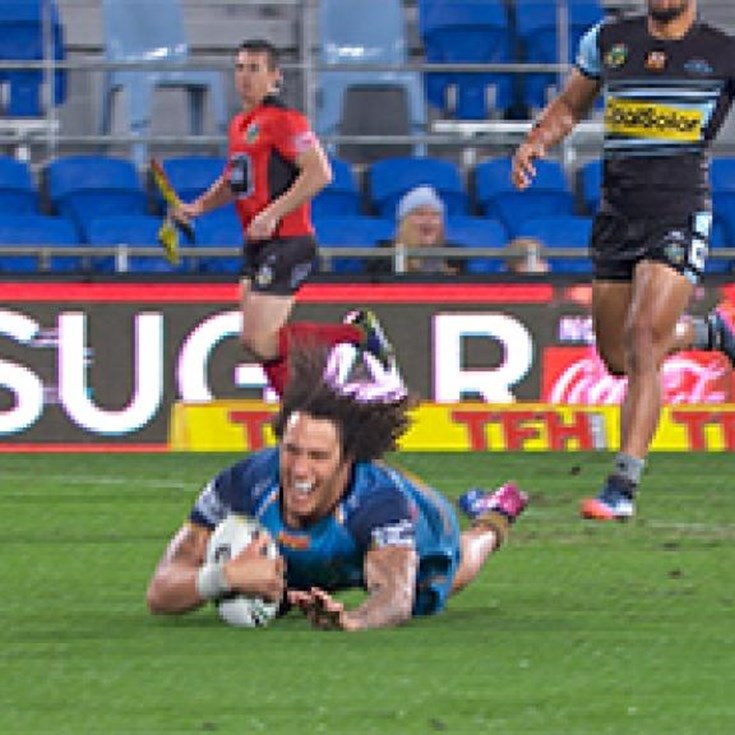