Over the next seven weeks there will be plenty of games that have finals ramifications but for a ladder that is already skewing heavily towards the current top eight few may have the same influence that this will.

Bolstered by the returns of Matt Moylan and Peter Wallace but countered by the loss of Trent Merrin, if the Panthers can extend their winning streak to three there is the possibility they will draw level with the eighth-placed Dragons by the end of the weekend.

On the other hand, if the Titans are victorious for the fourth week in succession they will draw level with the Panthers on 20 points, which if the Dragons were to knock over Manly on Sunday will give the closest of the chasing pack a hefty four points to make up over the closing six weeks of the season.

Penrith's recent record against the Titans is a comforting five-from-seven and on the back of their Nathan Cleary-inspired win over the Warriors last week should see them run out onto Pepper Stadium for just the third time since Round 8 full of confidence.

The loss of Merrin is a big one – Moses Leota has been named in the No.13 jersey in his place – but the returns of Moylan and Wallace provide stability in the key playmaking positions.

Stability is a concept that the Titans are only now becoming familiar with as they prepare to run out with the same starting side for the third week in a row, the first time they have had such consistency all season.

Ashley Taylor and Tyrone Roberts have rekindled their halves partnership from last season to great effect while the continuity of personnel has enabled the team with the second-worst defence in the first 13 weeks to concede a total of just 34 points in their past three matches.

Gold Coast coach Neil Henry has named four forwards on his interchange bench but hinted that either Pat Politoni or Kane Elgey will be brought in from the extended reserves list prior to kick-off to bring some versatility to the bench.

‌Why the Panthers can win: It's been a funny old year for the highly-fancied Panthers to date but it doesn't appear to have hindered their belief that they can mount a comeback late in a game. There's no better example than their Round 14 heroics against Canberra in Bathurst but they have shown a propensity all year to come home strong. Through 17 games 37 per cent of Penrith's tries have come in the last 20 minutes of games and they have conceded just eight in the same period. The Titans on the other hand have scored 15 tries in the final quarter and conceded 20 so if it's close at the 60-minute mark, the home side will be hard to hold out.

Why the Titans can win: It's no secret that the best teams in the Telstra Premiership boast the best defence and in the past month the Titans have proved as miserly as any team in the competition. Finally enjoying a consistency of personnel, the Titans held the defending premiers Cronulla scoreless for 70 minutes in admittedly abysmal conditions and gave up 10 and 14 points against the Dragons and Wests Tigers in the weeks prior. That defensive resolve and a right edge that has scored 12 of the Titans' 14 tries in their three wins makes them a challenging proposition at both ends of the field.

‌
History: Played 15, Panthers 9, Titans 6. Tyrone Peachey was the villain and then the hero as the Panthers and Titans split their two encounters last season in dramatic fashion. With their Round 11 clash delicately poised at 24-all Peachey failed to jump on a pass he had spilled and Titans rookie Ash Taylor raced downfield before Anthony Don scored in the corner from the next play. For the rematch in Round 25 the Titans trailed 14-0 before fighting back to level the scores, Matt Moylan's match-winning field goal coming on the back of a bust by Peachey. Panthers have won five of the past seven meetings and three of the six played against the Titans at Pepper Stadium.

What are the odds: Panthers $1.53, Titans $2.51. Sportsbet punters are all over the Titans as outsiders with nearly four times the money invested on Gold Coast. The Titans are sure to be big firmers as the week goes on if the current money continues. Latest odds at sportsbet.com.au.

NRL.com predicts: With momentum on their side and so much on the line on what is predicted to be a sunny Saturday afternoon in Penrith makes this arguably the match of the round. Six wins from their past eight games has put the Panthers on the radars of those teams in the top eight at present while the Titans have simply no option but to turn a three-game winning streak into four to at least keep pace. In six of their eight wins this year the Panthers have scored at least 30 points and they may revel in being home on a fast track. Panthers by eight points. 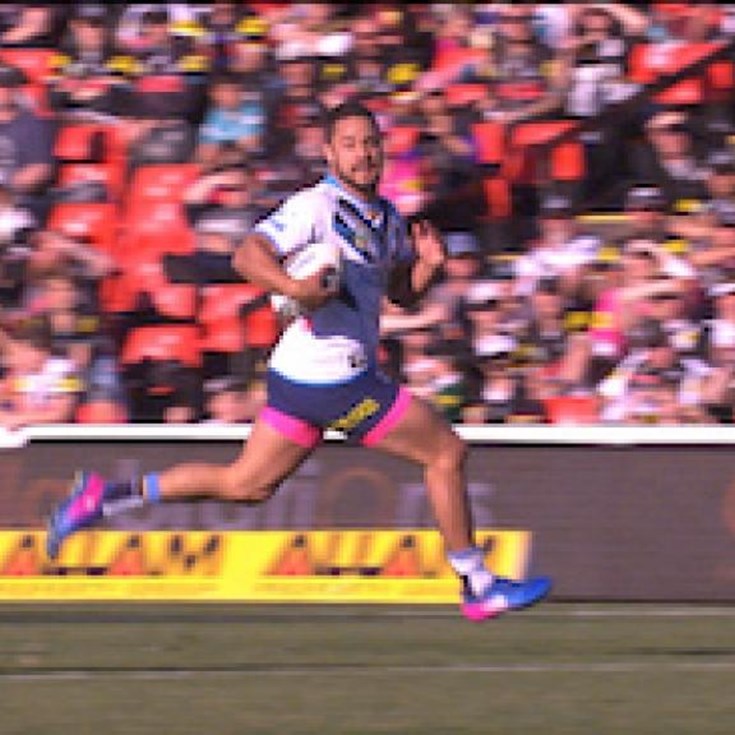