The best thing Women in League Round gives us is the opportunity to write cracking yarns that usually get buried in the day-to-day media churn in rugby league.

My colleague Pam Whaley told a couple of great ones in Big League this week and I thought I'd share the condensed versions here as a reminder of how far people are willing to go to do the things they love.

She spoke to Talesha Quinn, who was part of the NSW women's team some five years ago – the one that got smashed by Queensland year on year (for 17 years, in case you didn't know). Talesha packed her things up and enlisted in the Australian Army, asking to be stationed in Townsville, where she knew a strong women's rugby league competition existed.

Almost as soon as she got there, the competition folded, forcing her to play rugby union for four years. She is so tough she played through a dislocated hip – literally, she just got up and kept playing – and has refused to give sport up despite several major injuries.

When she saw NSW win the Interstate Challenge for the first time last year, she knew she had to get back into the side. She decided to leave the Army to come back to Sydney to chase her love for rugby league – but luckily contracts were offered to female players in NSW for the first time in 2017 and she could stay in the Army and play footy for Cronulla-Caringbah.

Needless to say, Talesha made the Blues team that will run out this Sunday.

On the opposite side we have Steph Hancock for Queensland, who has been a part of teams which have had unimaginable success in the women's game on the back of her leadership.

To play footy, she's had to pay her own way at tournaments and for trips, take annual leave from her full-time job, keep her fitness up on the side and for many years, be part of victories that barely caused a ripple in greater rugby league circles.

But now, with televised games and more professional camps – as well as participation numbers for girls and women jumping up to 190,000 across Australia – she says the hard yards were worth it.

There are hundreds of stories like this in rugby league. Women who have sacrificed to play, volunteer, work, support and keep players and clubs moving forward. It's nice to have one round of footy to say thanks.

Sims at the heart of women's revolution
The moment that blew Bremner away
'Rugby league started this': Page
Ladies who League: A letter to the future
Woodman primed for second Cup crack
Growing the game in Perth
'The place would crumble without her'

‌
And another thing… It's true, I'm a woman in league. Like most journalists, I find it extremely uncomfortable when I have to write about myself and the things I've experienced. I obviously have a pretty cool job, but work is work and I just consider myself lucky to have a job in the current media climate. I certainly can't speak for all female sports journalists but personally, all I want for my professional career is that people don't feel the need to point out or celebrate the fact that I'm a woman. Hopefully our work can simply be appreciated because it's good! 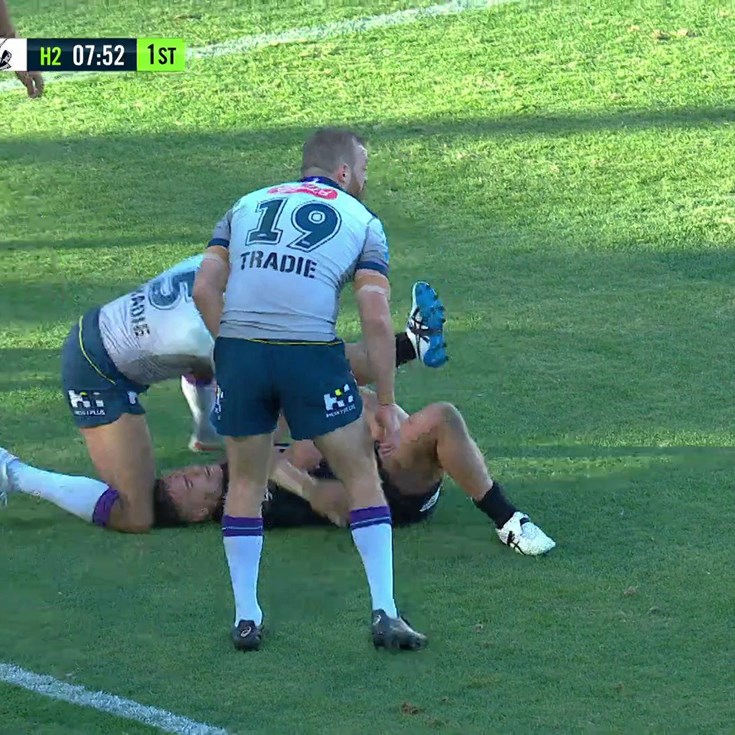 Maumalo gets a try in his Warriors farewell

Addo-Carr with the inside ball to Olam