It wasn’t pretty but the Melbourne Storm remain atop the NRL ladder with a 20-14 victory over the Canberra Raiders in match packed with talking points. Fans nervously await news regarding injured stars Cameron Smith and Billy Slater while Raiders forward Sia Soliola could be charged the NRL match review committee.

It certainly wasn’t Melbourne’s best performance of the season, finishing with a completion rate of 30 from 39 sets.

However, it was a brave effort considering the loss of captain Cameron Smith and Slater in the second half.

Smith alleviated fears of a serious injury that shouldn’t cause him to miss game time.

"The doc thinks it is a slight pec strain; the decision to come off was a precaution," Smith said.

While the win keeps the Storm in prime position for back-to-back minor premierships with six rounds to go, there is still room for the persevering perfectionists to improve before the finals.

Raiders forward Iosia Soliola can consider himself extremely fortunate not be sent off after an ugly late high shot on Billy Slater. Soliola’s misdemeanor forced medical staff to stretcher Slater from the field and miss the remaining 30 minutes as the Storm clung on to a 12-6 lead.

Social media went into meltdown after match officials opted to place Soliola on report and Storm CEO Dave Donaghy has already promised to follow up the incident with NRL officials.

For @storm members asking, I've already sent a text to @nrl powers to be informing them we'll be asking the obvious question this wk

There will be plenty said about Soliola’s indiscretion as he faces potential punishment from the judiciary, in a major blow for the rest of the Raiders’ season.

Will Slater’s injury affect his decision to retire?

As nervous Storm fans await news from Slater’s injury, the 34-year-old has said he will make a decision to play on in 2018 within the next six weeks.

Melbourne coach Craig Bellamy confirmed Slater was OK and didn’t need to go to hospital in a relieving update for rugby league fans.

"Billy isn't feeling too good, we will just have to see how he feels during the week," Bellamy said.

Slater has battled shoulder injuries in the past two seasons before making a remarkable comeback for the league-leading Storm and starring in the Queensland Maroons’ State of Origin series victory. Could this latest incident be a major consideration in Slater’s retirement decision?

Canberra’s 20-14 loss to Melbourne sees them fall to a 7-11 record with very little chance to reach the finals. It’s a bitterly disappointing result after so much optimism and promise in the pre-season for the Raiders to advance from their preliminary-final finish in 2016.

Close losses are a recurring theme for Canberra, and their sixth-worst defence in the league is largely to blame.

The match was in the balance as the Raiders scored to cut the deficit 14-10 with 15 minutes left but an unforgivable error from the kick-off allowed the Storm to seal the victory.

Captain Jarrod Croker also added: "That was our best game this year. Our fans were great again."

However very little separates victory and defeat, something the Raiders are well aware of. It’ll be intriguing to see how they respond in a do-or-die clash with the South Sydney Rabbitohs on Saturday.

Cameron Munster has gone from strength to strength this season, his impressive debut for Queensland reaping immediate rewards for his club as he translated his Origin performance back into a vital win for the competition leaders.

In a dazzling performance for the Storm, Munster stood out again, troubling the Raiders' defence all-match long.

Munster scored the match-sealing try along with four tackle breaks and a line break in running for over 100 metres.

Bellamy praised the fast-rising youngster who continues to build his halves partnership with Cooper Cronk. 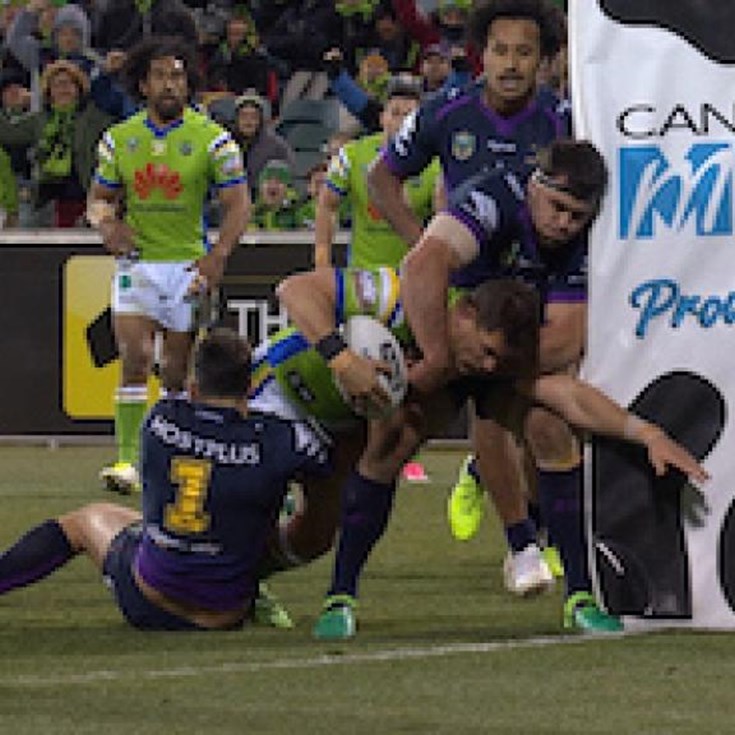