Parramatta have produced their best performance of the season in one of the best games of the season, streaking away late in a hugely impressive 28-14 win over the Broncos at ANZ Stadium on Friday night.

‌The performance was all the more remarkable given the way both teams started the game, with the Broncos racing two tries past Parramatta before the home side even seemed to realise the game had started.

However the Eels bossed most of the game from that point, though two tries in the final five minutes meant the scoreline completely belied the tightness of the contest that saw the two teams no more than two points apart from the 17th minute to the 75th.

The win all-but guarantees the Eels will play finals footy for the first time since 2009, while Brisbane remain in the top four but missed a gilt-edged chance to move to second in their quest to nail a top-four finish.

Both teams also suffered injuries to key players with Broncos hooker Andrew McCullough (knee) and Eels lock Nathan Brown (concussion/jaw) failing to finish the game. Adam Blair (shoulder charge), Brown (high tackle) and Kenny Edwards (dangerous/contrary conduct) may yet each have a case to answer at the judiciary too following an at-times spiteful contest.

The Eels looked completely shot early as the Broncos raced out of the blocks with newly re-signed centre James Roberts running amok. Matt Gillett finished off a long-range movement started by Roberts in the fifth minute before Roberts scored himself just two minutes later off a nice Gillett offload.

At 12-0 after seven minutes the Eels looked in for a long night but they got back into the contest in the middle on the back of some big efforts from the likes of Nathan Brown, Tim Mannah and Siosaia Vave while their halves continued their excellent kicking form.

A brave grubber from Mitch Moses, who took the ball to the line and got belted by a possible shoulder charge from Adam Blair, resulted in a try to Tepai Moeroa in the 14th minute.

A superb no-look cut-out pass from Moses three minutes later allowed Kirisome Auva'a to cross untouched and at 12-all after 17 minutes a cricket score was on the cards.

Despite some end-to-end footy there were no further tries in the opening 40, which was punctuated by a huge melee in the 37th minute.

Winger Jonus Pearson slipped into a tackle from Nathan Brown and Kenny Edwards dropped a shoulder into the prone winger, sparking a furious response from Brisbane. While Brown was the one placed on report it appears Edwards is more likely to have a case to answer at the judiciary.

The ensuing set saw another penalty given to the Broncos who opted for an easy two points and a 14-12 half-time lead.

The Eels almost claimed the lead five minutes after the resumption but Norman couldn't quite pick up a precision Moses chip at the Broncos line. After a further 10 minutes largely dominated by the Eels, a few repeat sets at the Brisbane line without a try convinced Parramatta to take a free two points from a penalty and level up at 14-all.

An excruciatingly intense 15 minutes that was bossed by the Eels saw the deadlock broken by another penalty goal.

At the end of a big set, Michael Jennings rocketed out of dummy-half on the last and grubbered ahead for himself and was taken off the ball by Blair. In a huge double-whammy for Brisbane, not only did the Eels take the lead 16-14 but Blair also crashed into hooker McCullough, who was taken from the field with a suspected medial ligament injury.

When Suaia Matagi exploded through the Broncos line with a violent return from the kick-off to send Michael Jennings into space the Broncos were again left defending their line. While they hung on at that moment they couldn't keep Parramatta out at the next time of asking with Auva'a tiptoeing down the touch-line to bag his second.

Moses's clutch sideline conversion made the lead more than a converted try at 22-14 with five to play.

There was disaster from the kick-off for the Eels; while Brad Takairangi flew high to collect the short restart his knee collected teammate Nathan Brown in the chin on the way with Brown leaving the field for a concussion check and Takairangi appearing to hurt his knee, though he played on.

From that point Brisbane needed something special to steal a late win and instead it was the Eels who went further ahead with French's dive over from dummy-half icing a hugely impressive 28-14 win to send the 12,182-strong home crowd into raptures. 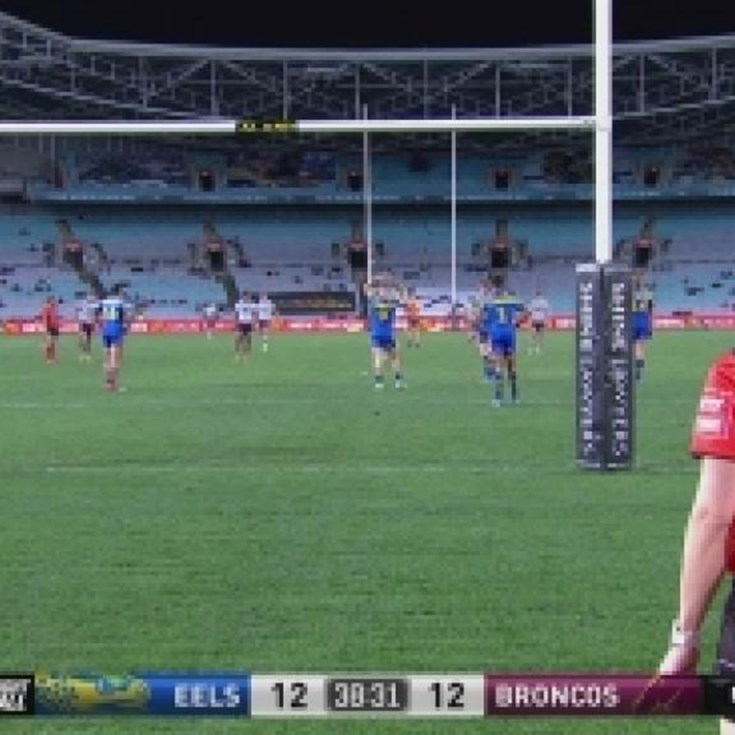