The Cronulla Sharks further enhanced their top-four prospects with a 26-12 victory over the spluttering Warriors on Friday night at Mount Smart Stadium.

Two tries each side of the break and a perfect five from five off the boot from Valentine Holmes lifted the defending premiers to the vital away victory, which delivered another blow to their opposition's slim play-off hopes.

While they didn't pull away on the scoreboard until the final 20 minutes – thanks to tries from former Warriors Sosaia Feki and Jayson Bukuya – Cronulla were always in control in Auckland and dominated proceedings through the middle of the park.

Kurt Capewell, a late starter in the place of Jake Bird, got Cronulla on the board inside the opening five minutes, with Holmes converting to make it a dream start for the visitors.

They should have been in again a short time later when Andrew Fifita claimed a bomb and ran from a few metres out, denied only by a desperate strip from Roger Tuivasa-Sheck.

Clumsy errors from both teams then gifted four-pointers in the final 12 minutes of the half, first with Solomone Kata intercepting a wayward pass from James Segeyaro to go 60 metres, before Mason Lino dropped the pill to give Fa'amanu Brown an untouched run for Cronulla's second.

With the Sharks up 12-6 at the break, David Fusitu'a muffed a regulation kick defusal and stepped into touch to start the second half, and when the Warriors then conceded a penalty Cronulla used it to extend their lead out to eight via the boot of Holmes.

The Warriors jumped straight back into the contest on 49 minutes, with Lino laying on a crisp pass for Bodene Thompson to score from close range and pull the Warriors to within two, Thompson leaving the field through injury soon after his four-pointer.

Not even losing Brown to a head knock on the hour mark could slow the Sharks down though, and with 18 minutes left on the clock they struck a killer blow via a swift left-side shift to send Feki over out wide.

A determined effort from Bukuya nine minutes from time put the result beyond doubt, lifting Cronulla to their 13th NRL Telstra Premiership win of the season and leaving the Warriors to lament a limp defeat which will mean they are at least six points outside of the top eight by the conclusion of Round 21. 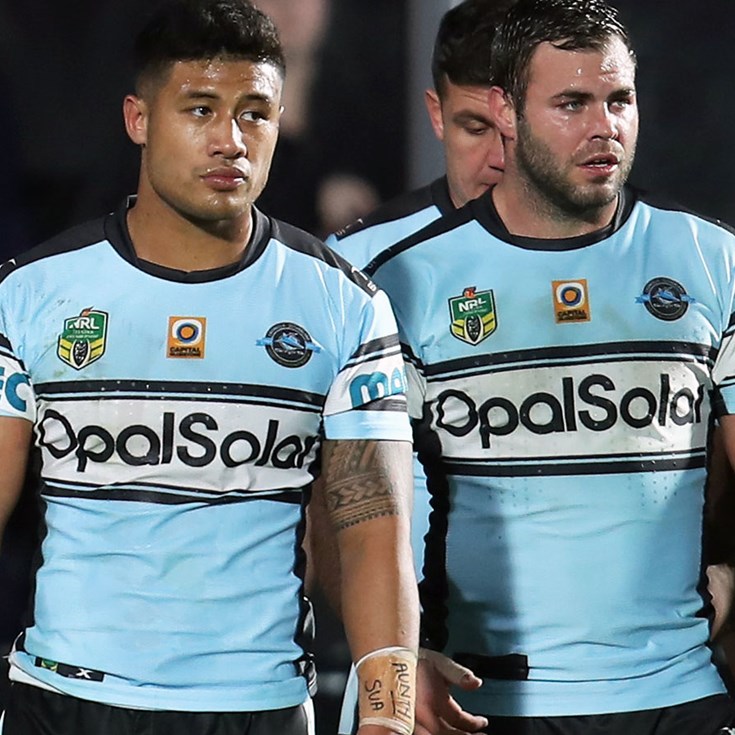