The Sydney Roosters have overturned a 16-6 half-time deficit to beat the North Queensland Cowboys 22-16 at Allianz Stadium on Saturday night.

Dubbed as the game of the round, the third-placed Roosters started off well before three straight tries from the Cowboys ensured the Bondi outfit had plenty of work to do in the second period.

Controversy struck the contest in the 32nd minute to blow the match wide open when referee Grant Atkins ruled Coen Hess got the ball down after a stock-standard carry close to the line with the Bunker unable to find sufficient evidence to overturn the try ruling.

That call proved pivotal in the game as it ignited the small but vocal crowd and fired up the Roosters who came out firing after the break to storm home.

After trailing 16-6 at the break, the Roosters jagged a four-pointer inside two minutes with Daniel Tupou weaving his way past Kyle Feldt in a tip-toe effort down the left touchline to go over in the corner.

Scores were soon level in the 57th minute when Siua Taukeiaho carried four defenders over the line to get the ball on the line, before a show-and-go from Luke Keary handed the Roosters a four-point lead with a quarter of the match remaining.

Taukeiaho was enormous off the bench for Trent Robinson's men – racking up 214 metres in a 43-minute stint – while Roosters fullback Connor Watson backed up his strong performance against the Knights with a 248-metre effort.

A penalty goal with 12 minutes left gave the Roosters a six-point advantage, and their defence was good enough to deny a last-gasp effort from the visitors.

‌Earlier, the Roosters caught Paul Green's men napping two minutes into the contest when Luke Keary found Latrell Mitchell on the short side for the 20-year-old to race 60 metres to the tryline while brushing past Kyle Feldt and Lachlan Coote in the process.

There were further concerns for the visitors with Michael Morgan coming off second best in a tackle on Ryan Matterson.

The Cowboys halfback played on and his team struck back in the 18th minute as mid-season recruit Te Maire Martin linked up with Lachlan Coote who then sent Kane Linnett into a gap to get on the board.

North Queensland continued to press the Roosters line on the back of a penalty for a late shot from Jared Waerea-Hargreaves off the ball on Kiwi counterpart Jason Taumalolo to take lead eight minutes later with Coote again the man to deliver the pass – this time for Feldt – for a try in the right-hand corner.

Taumalolo was doing everything in his power to lift the visitors with 21 carries and over 236 metres.

North Queensland now remain level with the Parramatta Eels on the Telstra Premiership ladder in fifth position, while the Sydney Roosters join the Melbourne Storm on top of the competition. 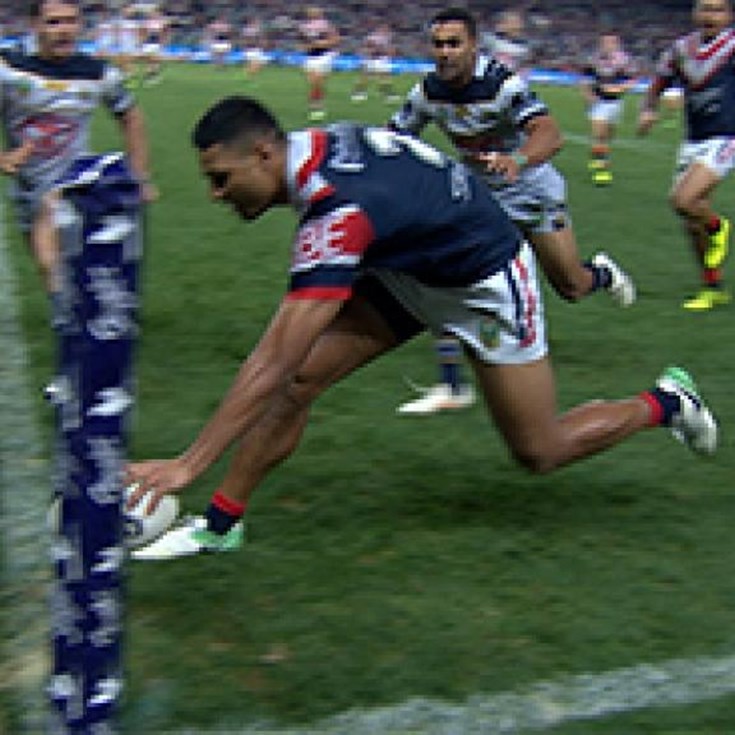