The top-of-the-table Melbourne Storm claimed a powerful 40-6 victory at home over the Manly Sea Eagles to retain their position as outright leaders with five rounds remaining in captain Cameron Smith’s 350th NRL match.

Fittingly it was the skipper’s man-of-the-match performance with four try assists that ignited his side to the emphatic win that puts the rest of the competition on notice before the finals.

While it was Manly’s second consecutive 30-point loss that leaves them grasping to seventh spot, it didn’t reflect their defensive effort against a relentless and clinical Melbourne side.

‌
The Storm wrestled a 12-6 halftime lead that took a large toll on the visitors who eventually succumbed to an enormous amount of pressure in defence.

Smith’s big day out started as he set up his side’s opening try to take a 6-2 lead after 17 minutes.

Smith faked a fifth-tackle kick before flicking an inside ball for Jahrome Hughes, who made an evasive run on his way to the line.

The Storm found plenty of success down the wings against Manly but to the visitors’ credit, they held on bravely and responded with a try of their own to cut the deficit 8-6, nine minutes before the break.

The Sea Eagles capitalised on one of their few opportunities in Melbourne’s end as Tom Trbojevic fired a brilliant cut-out pass to find winger Matt Wright to score in the left corner.

However, Melbourne extended their lead with a penalty goal after a head-high shot on Cooper Cronk before Suliasi Vunivalu powered his way over the line in the 36th minute.

It didn’t take long after the break for the Storm to assert their dominance as second rower Joe Stimson crossed in the 46th minute before Kenny Bromwich pounced on a spilt ball in-goal to give the side a commanding 24-6 lead midway through the second half.

Will Chambers then put the result beyond doubt with 10 minutes left with his own try under the posts.

Smith had the first say of the day and he aptly enjoyed a final highlight as he kicked an inside grubber to connect with long-time teammate Cronk to score a match highlight try, before Josh Addo-Carr finished the rout with a long range try, just managing to stay in the field of play before streaking 60 metres to score. 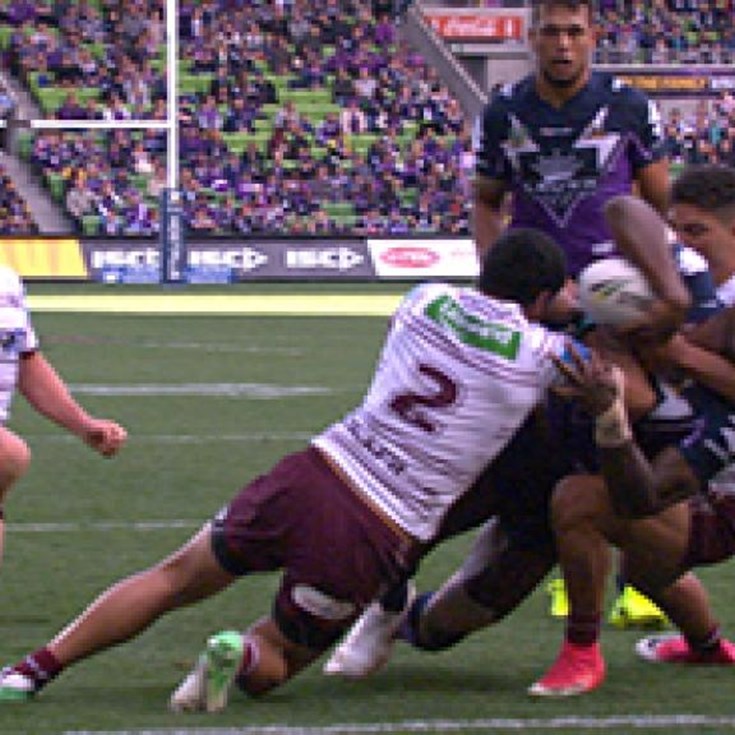