A brilliant performance from James Tedesco and a Titans team that forgot to turn up for the fight has seen the Wests Tigers record their fifth win of the season with a dominant 26-4 victory at Cbus Super Stadium on Sunday afternoon.

Titans coach Neil Henry reshuffled his side just prior to kick-off, moving Jarryd Hayne to right centre and Tyrone Roberts to fullback to accommodate Kane Elgey at five-eighth but it seemed to do little for a side that has struggled with cohesion all season.

‌
It was a change that was adjusted after the home side went into half-time trailing 4-0 but with Hayne back at fullback the Tigers seemed to enjoy running their attack at Roberts who was now at right centre.

Dominant in the first half without boasting the points advantage to show for it, the Tigers scored two tries inside the first 10 minutes of the second term to better reflect the contest and when Chris Lawrence pushed through some awful Titans' goal-line defence to equal Benji Marshall's club record with the 76th try of his career, the Tigers confined Gold Coast to the also-rans for 2017.

A try to centre Esan Marsters in the third minute provided the only points of the first half but the Tigers could have been leading by far more. Tedesco was denied a four-pointer under the posts due to an obstruction by Sauaso Sue and errors cruelled a number of golden opportunities as the Tigers enjoyed 54 per cent of possession against a Titans team completing at worse than 60 per cent.

If Henry was hoping to see an improved mindset and control of the football to start the second half he didn't get it, a pushed Agnatius Paasi offload putting his team back under pressure and the result was the Tigers' second try, albeit in fortuitous circumstances.

It was Marsters who was the instigator with a flick pass as he threatened to be pushed into touch, Michael Chee Kam offloading to Tedesco one-handed as he charged at the Titans line. Tedesco dropped Chee Kam's pass but managed to get his leg to the ball before it hit the ground and was first to the ball before it bounced across the dead-ball line to score just his fourth try of the season.

If the Tigers' dominance had gone unrewarded in the first 40 minutes they soon made up for it with a third try just three minutes later courtesy of Malakai Watene-Zelezniak sparked by a Luke Brooks bust.

Physically dominant across the park, the Tigers almost had their fourth when Matt Eisenhuth was held up over the line in the 50th minute before the Titans had their one and only piece of joy for the night when Hayne reached out to score in the 52nd minute.

A horror night for Titans back-rower Joe Greenwood could have further repercussions with the Englishman likely to come under the attention of the match review committee for a high tackle on Tedesco in the 63rd minute for which he was penalised. 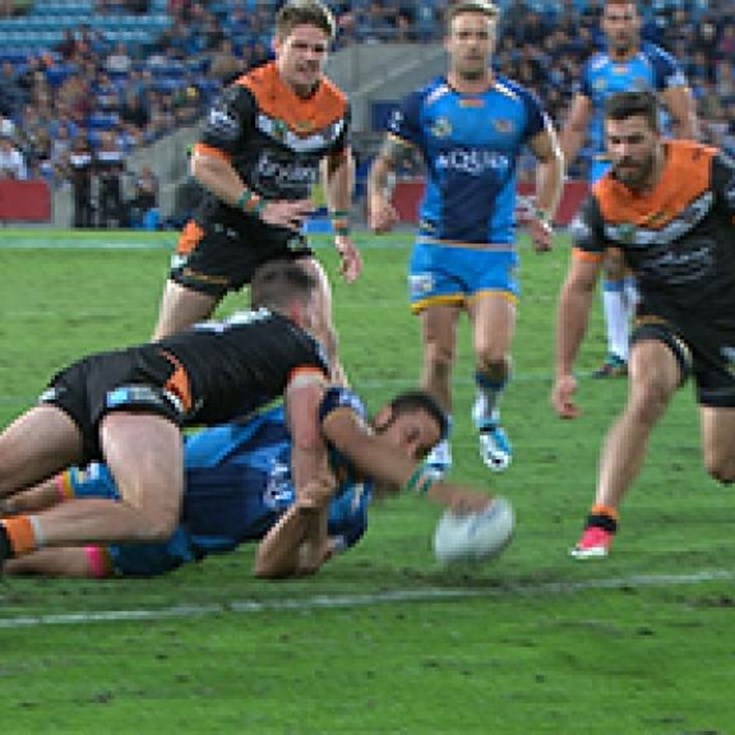