Wile E. Coyote and Elmer Fudd both know how the Titans feel.

Futile attempts to defeat an enemy that humiliates you in increasingly infuriating fashion eventually wears thin to the point where it ceases to be a rivalry anymore.

Bugs Bunny and the Road Runner were only too happy to keep turning up for the fight because no matter what they did they always got the better of their opposition.

The Titans haven't had it quite as tough as Wile E. and Elmer over the past decade but it's been more than three years since their last triumph over the Broncos and their past two defeats have been particularly cruel.

In last year's qualifying final the Broncos knew every way the ball would bounce before it happened while the Titans lost Zeb Taia in the warm-up and their halfback Ash Taylor midway through the second half just as they threatened to stage a comeback.

Then in Round 7 this year Gold Coast looked set to take their biggest scalp of the season when they led Brisbane 22-18 with two minutes to play before a charge down from Matt Gillett landed in the arms of James Roberts who evaded the clutches of his cousin Tyrone to score the match-winner against his former club.

Although the Titans' loss to the Tigers has robbed this encounter of any major finals ramifications there are interesting undercurrents to be found everywhere you look.

The Broncos boast the two players who share the Titans' record for most tries scored in a single season in Roberts and David Mead, three more players who grew up on the Gold Coast and even Keebra Park alumni Benji Marshall on the bench.

The Titans similarly have a heavy sprinkling of former Broncos within their squad with Taylor and Jarrod Wallace parlaying their opportunities into regular starting roles and Dale Copley taking a circuitous route to land on the GC after six years as a Bronco.

After the disappointment of last week Titans fans are desperate to see their team stand up to the Broncos so they can walk out of Cbus Super Stadium with their heads held high.

When that happens we'll have a rivalry that genuinely means something.

‌Why the Titans can win: At some point the little brother has to make a stand and if they are not stinging from last Sunday's putrid offering and desperate to prove a point then the Titans will have even more soul searching to do. A rivalry only becomes genuine when both teams are a chance of winning and having lost their past six on the trot against the Broncos the Titans need to finally make a stand. They are close to full strength on a sunny Saturday at home with a full house expected; time to prove their Round 7 near thing was no fluke.

Why the Broncos can win: The Broncos bench has been given a shake-up this week due to the injury to Andrew McCullough but their interchange remains of one of Brisbane's strengths in 2017. The likes of Joe Ofahengaue, Herman Ese'ese and Tevita Pangai have not just been carrying on from the good work by the starters but taking it up a notch. The Broncos bench is ranked second behind the Eels for impact with an average of 75 metres and totals of 61 offloads (NRL best), 82 tackle breaks (third) and 14 line breaks (first). If the Titans can't win the battle in the first 20 minutes they might struggle to wrest it back.

‌
The history: Played 22; Titans 5; Broncos 17. The first time a Broncos team travelled down the highway to play a Gold Coast team at Tweed Heads was in Round 10, 1988 when they faced off against the Gold Coast/Tweed Giants. Wayne Bennett was of course the coach of the Broncos that day and there are a number of names that remain entrenched in the rivalry almost 30 years later. Current Titans CEO Graham Annesley was the referee, Titans assistant coach Terry Matterson locked the Brisbane scrum, scored a try and kicked three goals, his opposite number was Robert Simpkins, father of current Titan Ryan and the Titans were led up front by Peter Smith, today the club's welfare manager. The Giants won 25-22 that day thanks to a Scott Mieni double and all told the record between Brisbane and Gold Coast teams stands at 37 games played, 30 wins to the Broncos and seven to the Giants/Seagulls/Chargers/Titans.

What are the odds: Brisbane have been included in a stack of Sportsbet multis over the round and are at reasonably backable odds in the head-to-head market. Both sides have been supported to win 1-12 so the money suggests we could be in for a close tussle. Latest odds at Sportsbet.com.au.

NRL.com predicts: Although the Broncos have been disrupted by the loss of McCullough and there's no way the Titans can be as bad as they were last week it's difficult to see anything other than a seventh straight win by Brisbane. The combination between Ash Taylor and Kane Elgey is still yet to click and without Konrad Hurrell the Titans are finding it hard to get their sets started. The Broncos on the other hand are second for total run metres in the NRL this year and with Anthony Milford scheming left and James Roberts ready to strike on the right, the Titans will struggle to keep them in check. Brisbane by 13 points. 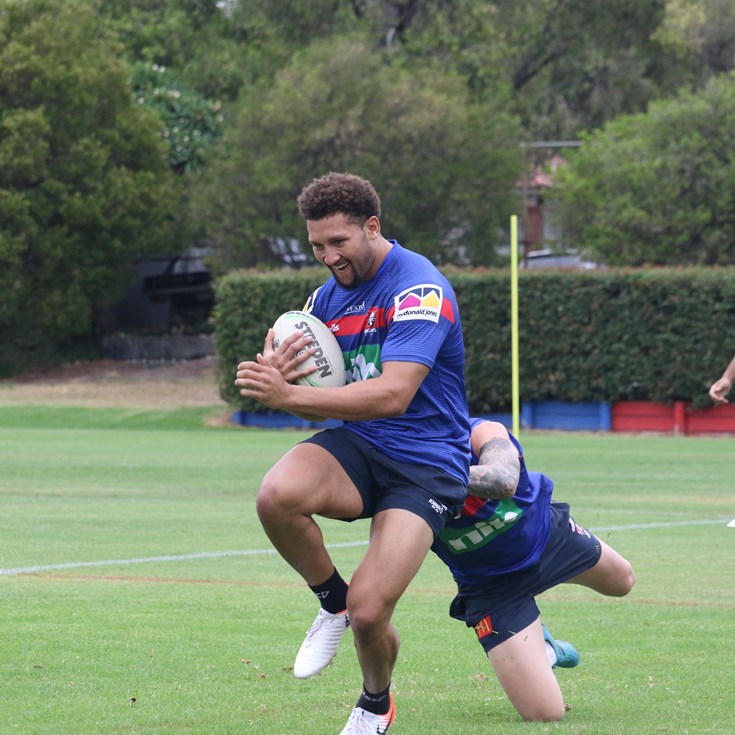