The Sea Eagles have bounced back from a horror fortnight to claim a crucial 36-18 come-from-behind win over the high-flying Roosters in front of a bumper crowd of 14,564 at Lottoland.

Manly's recent defensive woes looked set to continue when the Roosters' left edge ran riot with three tries in the space of 12 minutes in the first half, but there would be no meek surrender from Trent Barrett's side this time around with the hosts scoring the final 32 points of the afternoon to move within a win of the third-placed Broncos.

Halfback Daly Cherry-Evans put on a clinic while fullback Tom Trbojevic also shone with two tries and an assist as the Sea Eagles snapped their two-game losing streak in style.

The Roosters' hopes of claiming the minor premiership took a massive hit with Trent Robinson's men now four competition points behind the table-topping Storm who they face in a blockbuster game next Saturday.

They'll likely be without in-form winger Daniel Tupou who was forced from the field in the 65th minute with a groin injury, but they should welcome back co-captains Jake Friend and Boyd Cordner from their respective injuries.

Conditions couldn't have been any better on Sydney's northern beaches but the Roosters had to weather an early storm as Manly piled on the pressure with six consecutive sets which eventually proved too much for the visitors with Matt Wright diving over in the left corner to give the Sea Eagles the lead.

It didn't take long for momentum to swing the Tricolours' way and the weight of possession told as a bullet pass from Victor Radley out of dummy-half sent Tupou over untouched to make it 6-4 after 18 minutes.

The good times kept rolling for Trent Robinson's men when Latrell Mitchell produced a one-on-one strip to dispossess Daly Cherry-Evans moments after Tupou had dropped out of the tackle to score a very soft try next to the posts.

The Roosters' left edge continued to wreak havoc late in the first half when a sublime offload from Mitchell put Tupou into space before the winger linked up to send Luke Keary over to make it 18-4.

Just when things were starting to look dire for the home side, back-rower Frank Winterstein burst through a couple of flimsy tackles and found crowd favourite Tom Trbojevic back on the inside to cut the gap to eight points at the break.

The second half couldn't have started more bizarrely as Mitchell – perhaps knowing that Dylan Walker had knocked on moments earlier – produced an audacious flick pass in his own in-goal that was grounded by Cherry-Evans but was quickly waved away for the earlier infringement.

The Roosters wouldn't be so lucky on their next defensive assignment when a flurry of short passes around the ruck saw Trbojevic charge through a gaping hole to bring the Sea Eagles within two.

Manly should have hit the front 12 minutes into the second stanza when a perfectly-weighted grubber by Blake Green was bobbled by late-inclusion Brad Parker who only had to reel in the Steeden to score.

Parker's near miss was soon forgotten when Lewis Brown burrowed through several would-be defenders to make it 22-18 to complete the stunning turnaround.

Trbojevic sent a huge scare through Lottoland when he stayed on the ground writhing in pain after collecting the knee of Mitchell in the 59th minute, but thankfully for the Manly faithful the star fullback was able to continue.

The Roosters refused to die wondering and launched an offload assault that caused all sorts of problems through the teeth of ruck, but try as they might the visitors couldn't crack Manly's resolute defence.

The home side's grit was rewarded 11 minutes from full-time when Parker charged onto a flat ball from Trbojevic to seal the win before Cherry-Evans iced the game with a late penalty goal and a try of his own to revive Manly's push for a place in the top four. 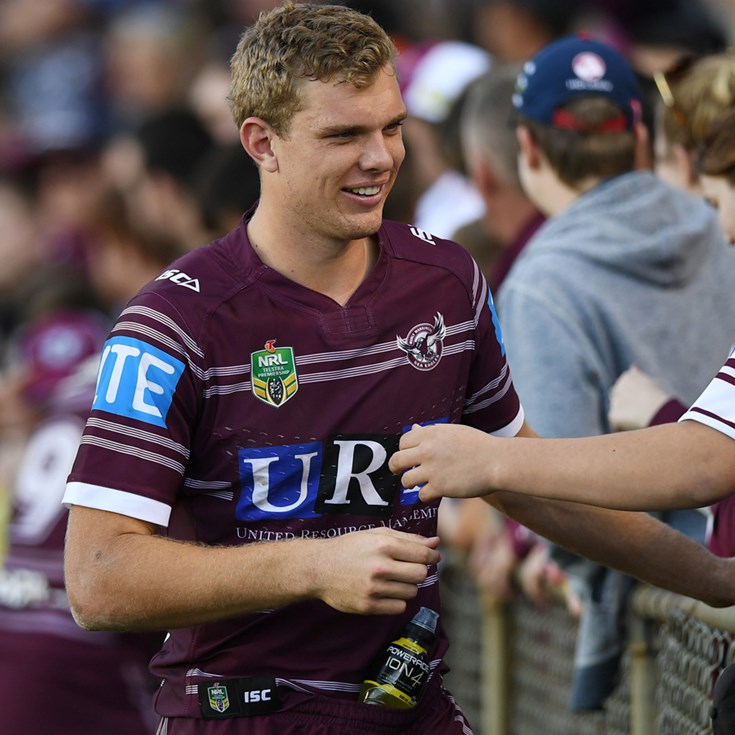 Roosters motivated by year from hell