The Dragons have temporarily jumped back into the Telstra Premiership top eight after they thrashed the struggling Titans 42-16 whose season is spiralling out of control after four losses on the trot.

Recent losses to the Knights and Rabbitohs looked to have put a serious dent in St George Illawarra's quest for the finals, but Saturday's result has resurrected their charge with a Round 25 showdown against the Panthers likely to determine who features in the post-season.

‌
The Dragons did most of the damage in an utterly dominant first half, and while the Titans had their moments after the break, the result was sealed when crafty hooker Cameron McInnes touched down 17 minutes from the end.

Gold Coast's horror afternoon was compounded by injuries to Kane Elgey (sternum) and Jarrod Wallace (knee) while Pat Vaivai was forced off for an HIA in a disastrous five-minute stretch just after half-time.

Brought into the side to replace Josh McCrone at halfback, Kurt Mann made the most of his start with an outstanding five-minute burst to put the Dragons on the front foot.

After a sedate start from both sides, Mann took the game by the scruff of the neck with a clean line break, forced a repeat set and then backed up a half-bust by Josh Dugan to open the scoring after nine minutes.

Dugan looked certain to increase the lead from the next set only for the star centre to have the ball stripped as he lunged for the line but it didn't matter as Jason Nightingale finished off a left-edge sweep to make it 10-0.

Riding high on the back of a 65 per cent possession count, the Red V moved further in front when Joel Thompson charged onto a short ball from Gareth Widdop to give the hosts a commanding 16-0 advantage before Nightingale dived over in the shadows of half-time to give the Dragons an unassailable lead.

If the Titans thought the first half was bad, they were in for a shock as the Dragons kicked off the second stanza with one of the tries of the season as the ball sailed through nine sets of hands and featured a monstrous carry by Tariq Sims before McInnes finished off the play to bring the home fans to their feet.

The travelling fans were given a reason to cheer when Dale Copley streaked away to get the Titans on the board and thoughts of a miracle comeback started to drift into UOW Jubilee Oval when Anthony Don's spectacular effort cut the gap to 18 points.

Needing to settle things down, Widdop potted a gift two points from directly in front to push the lead back out to more than three converted tries before McInnes barged over from dummy-half to put the result beyond doubt.

A determined charge saw Vaivai crash over for the Titans but the Dragons would have the last laugh as Mann finished off as he started the day to complete the rout. 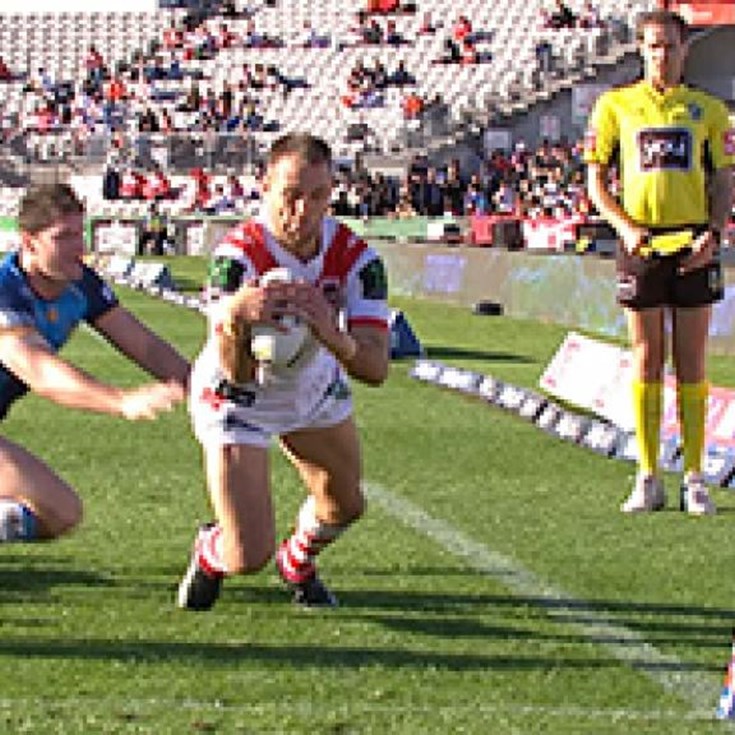