Nathan Cleary has scored a second-half double as the Penrith Panthers surged home to secure their sixth-straight win over an injury-hit North Queensland Cowboys 24-16 at Pepper Stadium.

It was a courageous effort from the Cowboys who were forced to defend their line throughout the second half after losing halfback Michael Morgan (concussion) and Justin O'Neill (dislocated elbow) in the opening half.

‌
The last tackle options from the Panthers left a lot to be desired after question marks from coach Anthony Griffin last week, but the home side ran riot at the backend of the contest.

Morgan left the paddock just a minute before the break after coming off second best in a tackle on Dallin Watene-Zelezniak, while O'Neill fell awkwardly in a tackle with Tim Browne and was taken from the field.

Jake Granville also came off for a head injury assessment with the visitors left with just one man on the bench, but the crafty hooker returned for the second period.

North Queensland may have been reduced to 15 but had ball-playing prop John Asiata the next cab off the rank to slot into the halfback position.

After stirring up social media with his silky skills earlier in the year, Asiata was in on the action again when he sent a charging Jason Taumalolo over to take a 10-point lead early in the second period.

Penrith were quick to respond and bring the lead back to four with Tyrone Peachey keeping the ball alive on the last tackle to kick through for Nathan Cleary to pounce in-goal.

Cleary turned defence into attack with arguably the try-saver of the season when he took on Coen Hess one-on-one and held up the back-rower in game-changing fashion.

The Panthers' confidence grew with the inspirational play and Anthony Griffin's men regained the lead in the 60th minute when former Cowboy James Tamou crashed over the line from short range against his old club, before the match was sealed six minutes out from the siren when Cleary went over for a double.

Earlier, Cowboys fullback Lachlan Coote was welcomed home with a high shot from Tyrone Peachey and the ex-Panther was targeted by his former club throughout the night.

Further possession deep in Penrith's territory turned into points three minutes after when Coote linked up with Javid Bowen on the left edge to send Kane Linnett over for the opening try of the game.

Both sides were completing at 100 per cent in the opening quarter of the game as North Queensland continued to control the yardage, but in the end injuries cruelled their momentum throughout the clash.

Back-to-back penalties relieved pressure for the Panthers and enabled the home side their first opportunity to attack.

A wayward pass from returning skipper Matt Moylan landed in Josh Mansour's hands and the former Australian international sliced through some lacklustre defence from Cowboys pair Scott Bolton and Shaun Fensom to get over the line.

The Panthers were looking dangerous after points until a strong effort from Taumalolo brought Dylan Edwards to ground.

Edwards soon showed his inexperience the following set as Cowboys hooker Granville shaped to go right before kicking inside for Morgan to clean up a ricochet off the posts to regain the lead.

The Panthers No.1 would have the final say though as he finished the contest with 217 metres in another strong performance.

It was the second win for the Panthers over the Cowboys since 2011 and Griffin's side now find themselves back in the Telstra Premiership top eight, while North Queensland's season is now hanging by a thread. 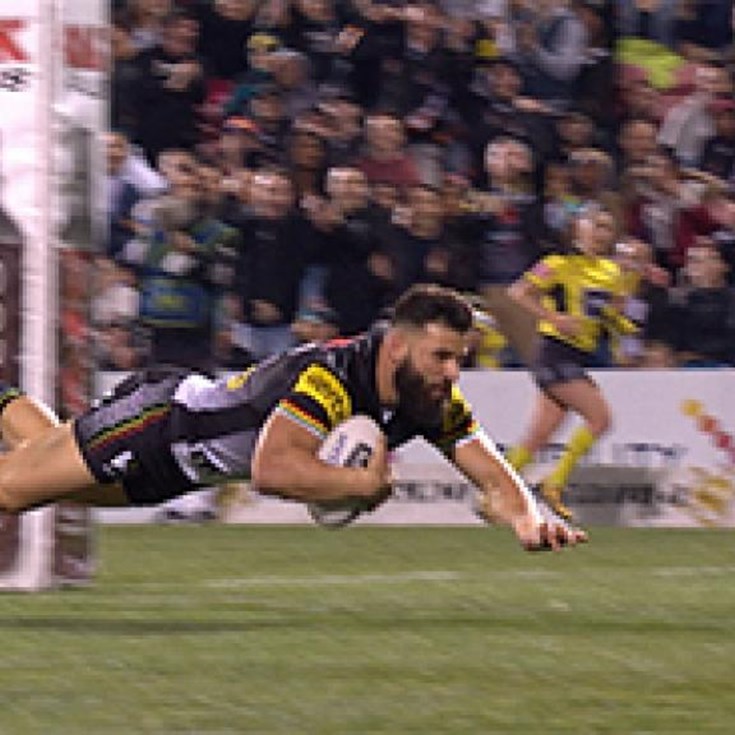