He's the prized recruit who Roosters fans are set to fall in love with next year, but on Saturday night Wests Tigers fullback James Tedesco almost broke his future employer's hearts with a stunning solo performance to spark his side to a late lead only for Latrell Mitchell to cross at the death to steal a 22-18 win.

Tedesco was involved in just about everything with a try, an assist and several crucial plays in defence that nearly helped his side snap a nine-game losing streak against the men from Bondi.

Instead, the Roosters recovered to stay in touch with the Telstra Premiership top two despite almost blowing a 16-point first-half lead.

A half-time deluge brought back memories of last year's corresponding clash that was virtually played under water, and after absorbing 20 minutes of relentless Roosters possession the Tigers turned the game on its head when Tedesco found Tui Lolohea with a questionable pass to give the visitors the lead.

The home side should have retaken the lead moments later when Boyd Cordner burst into the clear with three men in support, but incredibly they came up empty handed when Tedesco came up with a huge play to deny Ryan Matterson and almost intercepted the pass in one motion.

The star fullback was at it again two sets later when he ankle tapped a flying Blake Ferguson and then recovered to pick up the scraps when the winger's pass was put down by Mitchell Pearce who looked certain to score.

Just when it looked like the black and golds would hold on for a famous win, the Roosters took advantage of a loose ball to steal the win with eight minutes remaining when Michael Gordon set up Mitchell to score the match-winner.

Roosters enforcer Jared Waerea-Hargreaves faces a nervous wait after the firebrand front-rower collected Tigers five-eighth Tui Lolohea with a stray elbow well after the playmaker had kicked the ball.

Despite kicking into a powerful breeze in the first half, Trent Robinson's men played the conditions perfectly with the Tricolours enjoying 57 per cent of possession while they also outran the Tigers by 300 metres.

Ferguson was involved in everything in the opening exchanges as he went agonisingly close to grounding a grubber that had too much weight and then produced one of the try-saving tackles of the year to somehow deny Malakai Watene-Zelezniak at the other end.

Ferguson wasn't the only player off to a sizzling start with Waerea-Hargreaves capping an outstanding 12-minute burst to pop a sumptuous offload for Mitchell Pearce to open the scoring.

The home side should have doubled their lead in the very next set when Mitchell burnt his man on the outside and then put in an angled grubber that should have resulted in more points, only for the returning Gordon to fumble the Steeden.

The fullback's blushes were soon forgotten when Pearce played short to put Aidan Guerra into a gaping hole before the halfback and Ferguson combined to set up Mitchell Aubusson in the corner to make it 16-0 after half an hour.

An error by co-captain Jake Friend from the ensuing kick-off opened the door for Ivan Cleary's men to hit back and they made the most of their opportunity with Josh Aloiai charging through to get them on the board before Tedesco crossed with the half-time siren blaring in the background to give the Tigers a sniff heading into the break. 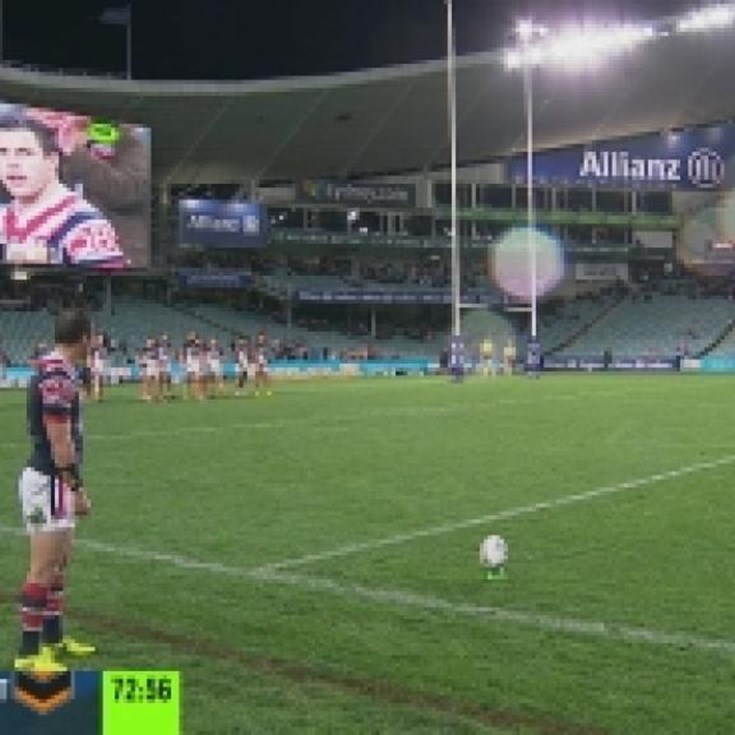