It's not often a player can bring a smile to both coaches after a game but that was the case on Saturday night when Roosters-bound James Tedesco almost inspired a freakish comeback for his Tigers, only for the Tricolours to cross late to claim an important 22-18 victory at Allianz Stadium.

The 24-year-old NSW fullback will make the move to Bondi next season on a four-year-deal, but he showed he's still fully committed to the Tigers in 2017 with one of his best performances of the year.

Tedesco scored a try right on the stroke of half-time to give his side some confidence and then set up Tui Lolohea for the go-ahead try midway through the second half, but it was his defence that really shone with the rep star coming up with several huge plays to deny the Roosters what would have been certain four-pointers.

‌It would have been a bitter pill for the Roosters to swallow had their future teammate been the one to cost them a crucial win, but instead they were treated to a dazzling all-round display that has them excited heading into next year's campaign.

"He's a good player and he showed that tonight," Roosters coach Trent Robinson said after the game.

"The thing is, if you feel like you've got a team under control and then a player like him pops up and creates change in the opposition in a major way, and he did that tonight.

"He made a huge difference in that scoreline in the pressure that he built against us. It's a credit to him and it's a credit to the way the Tigers are playing at the backend of this year."

"We know how good he is. We've been able to watch him from afar for the year and a few years now," Friend said.

"There's nothing we can really do this year because we've got our squad and we're doing our thing, but definitely it's exciting seeing a player like that play like he did against us tonight. It'll be good to have him here next year."

It was a bittersweet moment for Tigers coach Ivan Cleary who was proud of the way his star fullback played, but knows deep down that he's only got another two weeks of Tedesco's magic before he links up with the Tricolours.

"He's been really good for us the last few weeks which is good to see. I'm sure he's looking forward to continuing that over the next couple of weeks," Cleary said.

"We've known for a long time [that he's leaving] so we've just got to enjoy it while he's here.

"You're never going to be able to replace him; you just don't go and take a James Tedesco off a tree so we'll just have to play a little bit differently. The fact that he's left has allowed us to build a different sort of squad as well. That's life." 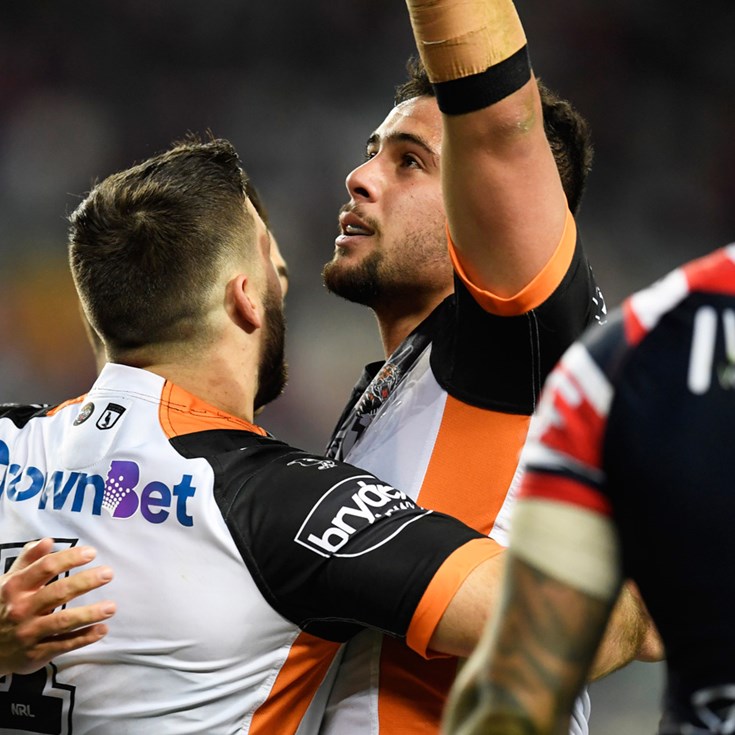 Complacency not an issue for wary Roosters

Benji signing a link to the past: Cleary