Seven wins in a row has come at a cost for Panthers prop Reagan Campbell-Gillard who joked he'll need some soothers if he is to continue leading the team song.

‌Not that he is complaining about it too much.

Campbell-Gillard could be heard on Panthers TV struggling to shout the remaining few words of the wining team song after an energy-sapping four-point win over the Raiders on Sunday.

The prop is the team leader behind the song – a mantle he also carried through last year's finals series despite a broken back ending his season prematurely.

"The last couple of weeks I've been a bit croaky, no one else knows how to lead it so the throat is getting dusty," Campbell-Gillard said.

"Obviously just being in the system I learnt the song quick and I'm the idiot in the team that doesn't shut up.

"In first grade Shane Elford used to lead it for the first five weeks and then stopped and told me to do it.

"It's just stuck ever since. It's fun to get the chant out and 'Mez' (Trent Merrin) in the middle with a dance and water flying everywhere."

Confidence is sky-high at the foot of the mountains on the back of a winning streak that Campbell-Gillard believes is yet to reach its peak.

Victories over top eight sides have been hard to come by in 2017, but with 11 wins from their past 13 games, Anthony Griffin's men can only play what's in front of them.

"We have played those top sides and we've been in contention," Campbell-Gillard said.

"I thought at the start of the season against the Roosters we were in that contest the whole way and took belief from their forward pack that we can match the best in the business.

"We're playing teams that are below us but they're still quality sides. The Dragons are going to be real desperate this week and we've got to turn up and get one back on them for what they did to us in Round 1.

"I believe we've got the team to do it and the confidence between the boys at the moment is amazing. I think it's a lot better than we had last year, too."

St George Illawarra rattled the Panthers' cages in the opening round of the season – a result the side are yet to forget and desperate to make amends for.

The turnaround from Anthony Griffin's men speaks for itself after just two wins from the opening seven rounds of the Telstra Premiership.

Penrith are now in a position of finishing as high as fourth spot pending other results in the final fortnight of the competition.

For Campbell-Gillard, he is yet to experience a finals campaign.

"It was obviously tough times back then," he said of the start of the year.

"The first seven weeks I'll admit were probably the toughest I've felt at the club. It sucks when you're losing and things aren't working.

"We addressed it and have tried to simplify our football.

"We're not going to try and sit comfortably, hopefully finish in the top four if results go our way, but again if that doesn't happen we'll try and stay in the top eight.

"It's so close and one wrong move you can slip out."

Campbell-Gillard's move to the bench has coincided with the Panthers' strong run of form and the team spirit highlighted with both he and front-row partner James Tamou's efforts in chasing down Raiders flyer Jack Wighton on the weekend.

"I played the ball and admiring the kick Nathan [Cleary] put in and looked up with Wighton and looked around at 'Jimmy' (Tamou) and said 'lets go!'," he said.

"We've got a motto here 'what does it mean to be a Panther' and just things like when you look at your fellow front-rower running next to you, you get goosebumps and think you can do the play.

"It was like two clydesdales trying to run down the sideline."

The Fijian international will lock horns with cousin and Dragons back-rower Tariq Sims on Saturday and admits the cheap talk had already begun.

Despite playing each other in the past, Campbell-Gillard failed to recall any heated battles between the pair.

"I actually haven't had the chance because of my [old] role starting and him coming off the bench, I think it's been maybe one tackle and then he's gone off or I've gone off," he said.

"I'm probably more closer with Korbin just with age-wise but I can't wait, it should be fun.

"I'll keep running at him all day." 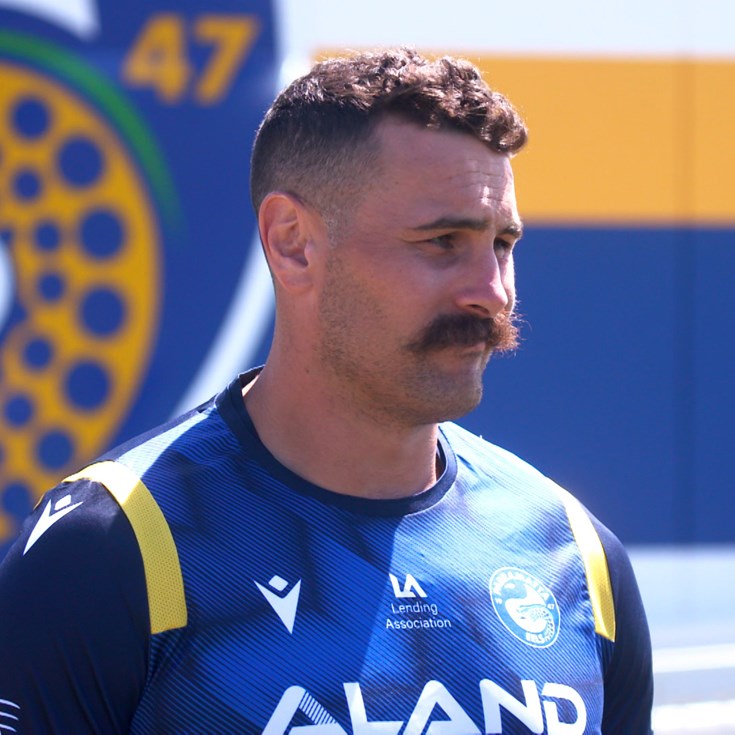