If nothing else this past week proves that wining solves everything.

Two coaches whose positions seemed to be the greatest subject of speculation of late went in to Round 24 looking for even a sliver of light. While Des Hasler could enjoy getting one over his former club and see his side post 30 points for the first time all year, Neil Henry's overseeing of the Titans' 30-8 loss to the Eels would prove to be his last.

After five weeks of disappointment the Titans are preparing this week under the watch of assistant coaches Terry Matterson and Craig Hodges and wondering who will be the club's third head coach when they start pre-season training in November.

Monday was an awful day on the Gold Coast as the axe fell on Henry and attention will now turn to how the players respond on Saturday. Will an improved performance be a tribute to Henry or proof that the coach had lost the support of his players?

As always, Jarryd Hayne has been prominent in the headlines after he missed last Thursday's loss to the Eels despite being in Sydney. He has been named to return at fullback with impressive youngster Phillip Sami named in the centres to replace John Olive who suffered a dislocated elbow against Parramatta and Jarrod Wallace back in the front row after missing a week with a knee injury.

Captain Ryan James is out with a shoulder injury and has been replaced in the front row by Agnatius Paasi with hooker Nathan Peats to assume the captaincy of the Titans for the first time.

Hodges and Matterson have stuck with a halves combination of Tyrone Roberts and Ash Taylor with Kane Elgey named on the bench along with Nate Peteru, Paterika Vaivai and Leivaha Pulu.

The heat that has been on Hasler for much of the season has been turned down just a touch after his side broke free of the shackles, completed at better than 75 per cent and scored three tries in each half to defeat Manly 30-16 last Sunday.

Hasler has named Matt Frawley and Moses Mbye to start in the halves with Michael Lichaa at hooker but has included Josh Reynolds on an extended bench as he desperately tries to recover from a calf strain so that he can play at least one more game for his beloved Bulldogs.

‌Why the Titans can win: With nine days to prepare and the club enduring a tumultuous fortnight of bad headlines and even worse results that ultimately led to the coach's sacking you have to expect a more committed team to take the field for their final home game of the season. Tyrone Roberts and Ash Taylor only had eight minutes in the halves together against Parramatta but have proven themselves to be the most effective pairing and the elevation of Nathan Peats as captain should ensure they are not short on passion. That's the least the fans can expect as they farewell a disappointing 2017.

Why the Bulldogs can win: When the worst attack in the competition meets the team with the worst defence you have to think that the team that can't defend its try-line will be the ones to break first. Prior to last Sunday the Bulldogs' previous best haul of points in 2017 was the 24 they scored against the Rabbitohs in Round 7 but their half dozen tries against the Sea Eagles should ensure a more confident brand of footy on what should be a sunny Saturday on the Gold Coast. It's been execution and not effort that has been the big criticism of the Bulldogs this season and if they can land a couple of early blows they will peel back any sense of Titans resistance.

‌
The history: Played 14; Titans 7, Bulldogs 7. Since 2013 these two teams have made a habit of meeting in late-season fixtures with the Titans boasting a 2-1 record in games played past August. In Round 22, 2013 the Titans upset a finals-bound Bulldogs team 26-16 and a year later shocked a Canterbury team that would go all the way to the grand final with a 19-18 win in Round 26 courtesy of a wobbly Will Zillman field goal. In Round 23, 2015 they met at neutral territory in Gosford where the Dogs went on a scoring spree in the second half to win 36-14. The Bulldogs are looking for three straight wins over the Titans but boast just one win from five previous games at Cbus Super Stadium.

What are the odds: One win was all it took for Sportsbet customers to get back onto the Bulldogs bandwagon. An astonishing 97 per cent of the money placed on this game is with the Doggies, and they're extremely well backed to win 13-plus. Latest odds at sportsbet.com.au.

NRL.com predicts: Will the under siege Titans be determined? Will the stodgy Dogs be free-flowing? Will the Titans rediscover their attacking mojo? Will the Bulldogs defence hold firm? Honestly, who would know, but what is clear is that two teams out of finals contention still have plenty to play for. As bad as their attack has been Canterbury have never stopped trying, and for that reason you have to side with the visitors. Bulldogs by seven points. 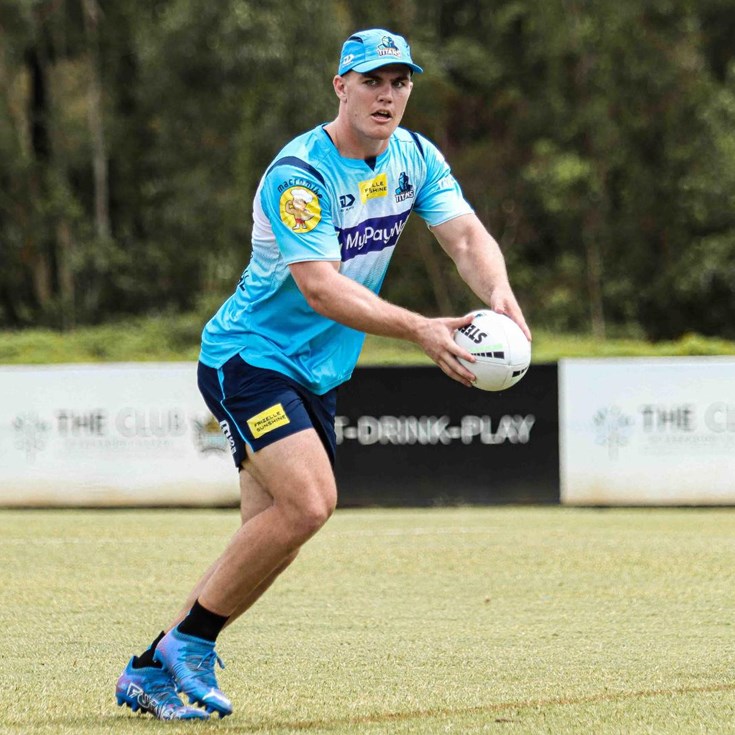