The Melbourne Storm have emerged 32-6 winners against the Canberra Raiders in a scrappy game on Saturday night.

On a clear Melbourne evening in front of more than 20,000 vocal fans, the Storm scored five tries to one but it was their fast start that proved too much for a gallant Canberra side.

The Storm scored their first try in the third minute through Felise Kaufusi, after the second-rower regathered a Cooper Cronk cross-field kick and dived over.

Canberra compounded this by kicking out on the full from the restart and the Storm hit back four minutes later. Jesse Bromwich scored his first of the year close to the uprights for a 12-0 lead.

The Raiders tried hard to upset the Storm's momentum but were hampered by errors and ill discipline with a completion rate of 67 per cent compared to the Storm's 86 per cent.

Tohu Harris sidestepped his way through Shannon Boyd and Jack Wighton from close range for the Storm's third in the 22nd minute.

The Storm were awarded a possible eight-point try as Joseph Tapine infringed when Harris scored his try, Cameron Smith kicking a further four points on a night he equalled Darren Lockyer's record for games played.

The possession evened up after half-time and the Raiders lifted their intensity on defence with some flying tackles.

They finally scored when Jordan Rapana caught a pinpoint Aidan Sezer kick to score in the corner with 20 minutes to go.

Winger Suliasi Vunivalu scored his 23rd try of the season when he ran down a Will Chambers grubber in the corner. Smith's sideline conversion made it a 20-point buffer.

Cooper Cronk and Josh Addo-Carr both had tries disallowed in the final 20 minutes but Harris crossed after finding space for his second with two minutes from time. 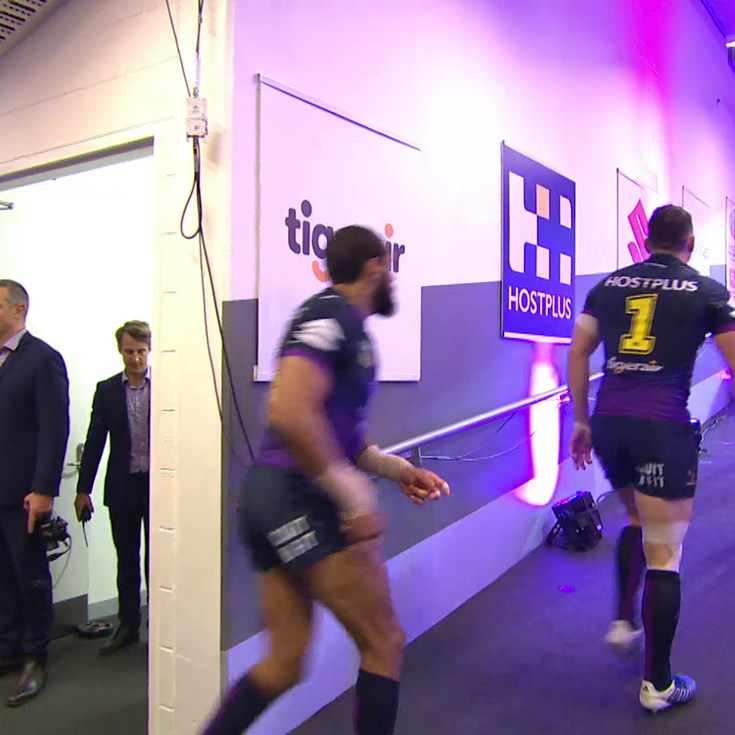