Parramatta Eels star Bevan French says he is rapt to take part in a remote mentoring session that allows him to provide footy training and advice to kids back in his hometown of Tingha in northern inland NSW.

When NRL naming rights partner Telstra approached French, the 21-year-old jumped at the chance to be instantly connected to aspiring rugby league players in his hometown – a full day's travel away – to share the types of lessons he only wishes he could have received when he was growing up in Tingha.

NRL.com sat in on one of the remote mentor sessions, as French faced a TV with a small camera connected that relayed his instructions instantly to a room of kids in Tingha and allowed him to also view them as they followed his guidance.

He guided the school kids through a variety of rugby league drills they can then take to training or play in the backyard aimed at improving little things like ball control, grip strength and hand-to-eye co-ordination.

"It's always good to give back when you can," French said of his quick agreement to be involved.

"The remote mentor program is to show a bit of recognition of what it takes to get from that [park footy] level to this level.

"It's something that rural kids and country kids really struggle with, transitioning from a not-so-professional level of footy to down here where it's pretty full-on and there's all these little things they have to learn to try and get right just on the go." French agreed he personally could have benefitted from such technology as a youngster, admitting the step up in professionalism once he moved to the Eels was an eye-opener.

"The level back there of footy is not so professional, there's a lot of raw talent out there but as far as directed talent goes and the little one-percenters, basic fundamentals, stuff like that are things we can fall behind in," French said.

"If I was back growing up there and had someone to mentor me it would have gone a long way."

"If we could do this on a more regular basis and gets kids to be connected to athletes from their home towns it will benefit them and the athletes as well."

He showed the Tingha students a game – invented, he said, by Eels wingers Semi Radradra and Kirisome Auva'a – where the teammates lie belly-down facing each other and have to pick a ball up one-handed, transfer it to the other hand and move it as far across the other side as possible before the teammate repeats the process, attempting to move it far enough that their rival struggles to pick it up. The player who makes the most errors in a set time period has to do 10 push ups.

Another exercise involved gripping a rugby league ball one-handed and bouncing a tennis ball up and down off the football.

"The main aim of the program is to show them what the difference is in the basic fundamentals," French said.

"It's the main thing I noticed when I came down here in my first year. I was used to backyard footy and then you come down here and these guys [in the NRL] are really big on the basic fundamentals, attention to detail, and it shows in the level of footy you watch week-in, week-out.

"You see guys scoring in corners with one hand, stuff like that. There's not as many errors in a game which is down to these basic fundamentals. Little things go such a long way. It can be the difference between scoring and not scoring." 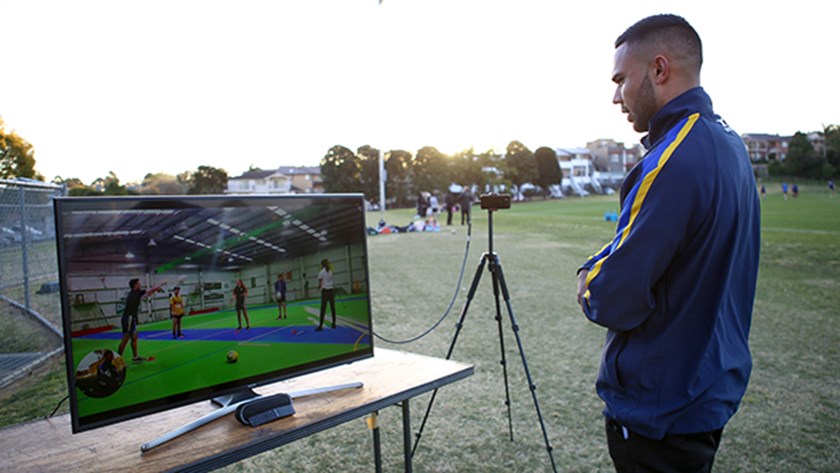 The remote mentoring program isn't limited to NRL players. Telstra will also use it to help kids in remote communities receive guidance from professionals in other areas such as Aussie Rules, netball and ballet.

"I had a quick read about it the other day. They're teaching kids by having people at a professional level mentor kids in rural areas through their technology," French continued.

"It's good to be able to do that from completely different areas. It's not only rugby league, they've got ballet, AFL and other sports as well."

He said the session flowed easily, as if he was directly in front of the kids.

"I think it's a great idea, not only over the next few weeks but to continue in general, using Telstra's technology, if you put the right stuff behind it, it could really go a long way," he said.

"Tingha's so remote, we're not so up to date with things out there.

"If we could do this on a more regular basis and gets kids to be connected to athletes from their home towns it will benefit them and the athletes as well."‌