Penrith coach Anthony Griffin revealed how a sombre dressing room against Manly last week – the worst he's witnessed since taking on the coaching role at the club – was the focal point to their 22-10 turnaround in the elimination final at Allianz Stadium on Saturday night.

Manly embarrassed Griffin's men at Lottoland in Round 26, but a change of venue and the finals mentality brought upon a near completely different performance – and it was Trent Barrett's side that in the end had no answers.

The turnaround was not a shock in the statistics department, with it being the 10th time a result has been reversed after teams have played each other back-to-back from a regular season game into the first week of finals.

"We all felt we let ourselves down and the first training session I knew it would be different," Griffin said of last week's effort.

"It was always going to come down to a knockout semi, it just happened to be the same two teams.

"It was always going to be different after last week and they're a really good side. Manly's defence was unbelievable at times, we just had to keep walking towards the battle."

‌Griffin admitted he, like everyone else in Sydney's West, held their breath with the Tyrone Peachey try in the 74th minute – a decision that had opposite coach Trent Barrett fuming post-game.

"You're always worried when it goes to the Bunker and that's no disrespect to anyone," Griffin said.

"You're in the lap of the gods and they ruled try so you couldn't take it off him. That's finals footy, too. It's neck and neck the whole way, you take it when they come.

"At times I thought early in the second half we started playing some footy and opened them up but the game started slipping away from us in the middle through our own errors.

"I thought the last 15 minutes we steadied really well."

It was a return to form for Panthers back-rower Bryce Cartwright, after a tumultuous season marred by injury.

The 22-year-old was Penrith's go-to man alongside Nathan Cleary last season but has found it difficult to find himself in 2017 until a crucial two-try performance on Saturday night.

Griffin revealed he rushed Cartwright back onto the paddock after a short break in the second half to chase points with scores locked at 10-10.

Cartwright repaid the faith by providing the try-assist for Peachey and the final four-pointer on the siren.

"That's what Bryce can do if he's there at those times," Griffin said.

"He can come up with big plays.

"I thought his last 20 minutes last week he got a bit out of that. He's been building into that [performance] and getting miles in his legs."

Meanwhile, Griffin wouldn't rule out the possibility of Matt Moylan returning for next week's clash with the Broncos in Brisbane.

Moylan sat out the side's win for personal issues with young halves Tyrone May and Nathan Cleary performing strongly in the Panthers skipper's absence.

"I haven't got an obvious answer, we'll wait and see," Griffin said of the possibility of Moylan's return.

"[May and Cleary] felt the flip side of it last week and it prepared them.

"I thought their composure under pressure was excellent." 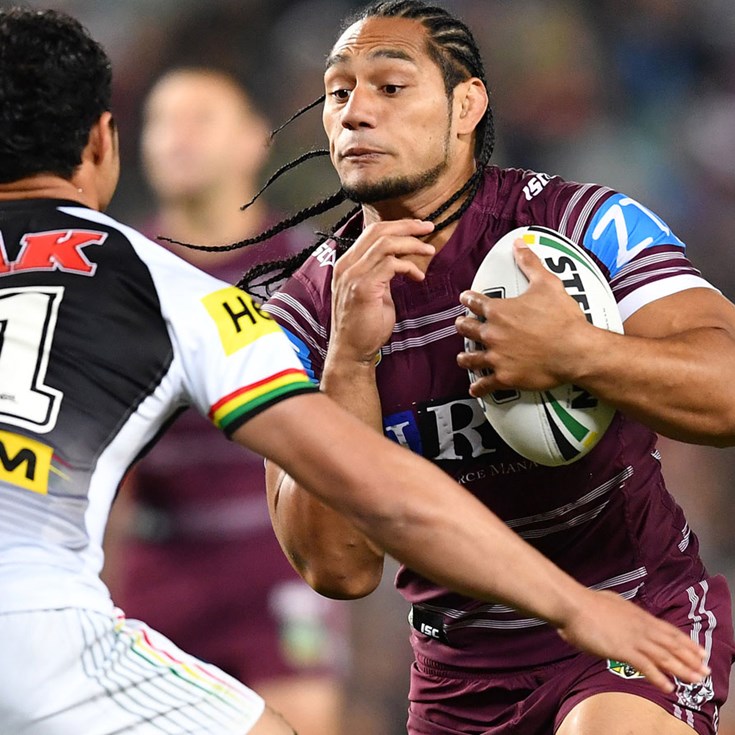 Taupau happy to be on Manly 'rollercoaster'

Penrith's Blake out of Manly clash