You've heard it all before - almost.

A Fijian flyer has taken the Rugby League world by storm, despite being new to the game. Maika Sivo is the next to come off the long production line of Fijian talent; in fact, a quick glance at his try-scoring record suggests he might just be the most exciting of them all.

"He's been doing it for the couple of years he's been playing over in Australia.

"I think he's definitely got NRL ahead of him. From where he's come in the past 12 months, who knows how good he could get?"

That record now stands at an incredible 96 tries in three years: one season for the Gundagai Tigers in the Country Rugby League’s Group 9, one for Mounties in the Sydney Shield and, this year, a season for St Marys and the Penrith Panthers in the Ron Massey Cup and Intrust Super Premiership NSW. Now a regular at Penrith since making his debut in Round 17, Sivo has helped the team to a grand final – and after Sunday’s clash is over, the sky is the limit.

"He's still coming to grips with becoming an Intrust Super Premiership player," Panthers coach Garth Brennan explains, "but he's getting better each week and who knows where he'll finish up? That's the exciting thing.

"I think he’s still got a lot of improvement left in him. Even though he's quite a big guy, he's still getting used to the physicality – and that just comes with experience." 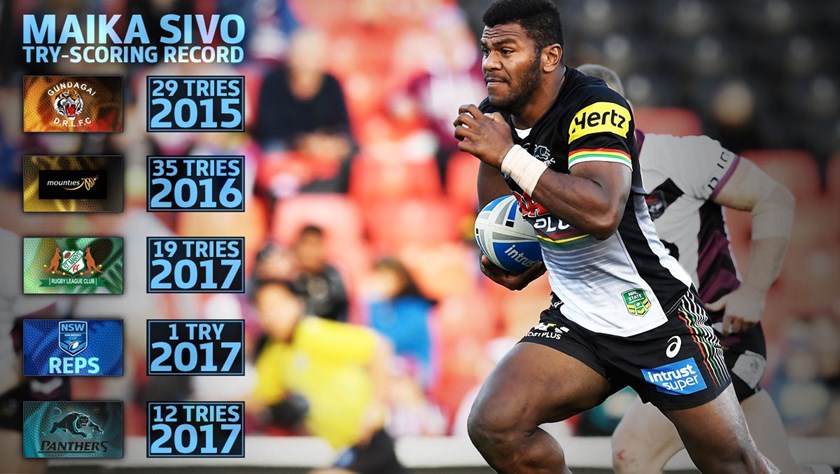 It was 2013 when Gundagai identity Don Tuckwell and wife Kathy, holidaying in Fiji, first set foot in the village of Momi. The island nation was beginning to assert its reputation for producing raw Rugby League talent, with Semi Radradra then the NRL’s newest superstar. Tuckwell threw his support behind the town and its club the Momi Tigers, inviting four players to the NSW Riverina to continue their development two years later. None were more exciting than Sivo.

Like so many of his countrymen, the hulking winger had grown up playing rugby union, even representing the Fijian Under-20s in the 2014 Junior World Championships. His introduction to the 13-man code in Australia, however, proved an immediate success.

"A guy that scores nearly two tries a game, you can’t combat that – and with his hit-ups coming out from our own 10-metre line, he just sets the foundations for the set.

"It's good to see that a player like him with talent can get an opportunity – and Penrith are going to get the full value from him."

Having already impressed at Intrust Super Premiership NSW level, Sivo has earned a contract to train alongside the Panthers’ NRL squad in preparation for the 2018 season. It will be a major challenge for the 23-year-old – who had never done weights training until earlier this year, let alone the gruelling task of an NRL pre-season – but it offers him the chance to take his game to even greater heights. Until then, Sivo will prepare for the biggest game of his career to date against the Wyong Roos, with all eyes on Leichhardt Oval on Sunday from 6:45pm AEST.

The NSWRL senior competitions’ finals series, covered like never before on NSWRL.com.au and the NSWRL Facebook page, culminate on Grand Final Day at Leichhardt Oval on Sunday 24 September. Be there to witness history, with tickets just $10 for adults and children under 12 free.

This article first appeared on nswrl.com.au