The NRL will pay tribute to 15 retiring players during the spectacular build-up to the 2017 NRL Telstra Premiership Grand Final between Melbourne Storm and North Queensland Cowboys at ANZ Stadium on Sunday (October 1).

"We have Premiership winners, Test and State of Origin representatives in this year’s list of retiring and departing players,” NRL CEO Todd Greenberg said.

“The tribute to our retiring players is one of the real highlights of Grand Final Day. Although we are always disappointed to know we won’t be seeing these players on that stage again, it is rewarding to be able to celebrate their achievements.

“I also know that a number of these players will play important roles in the game even after their retirement from playing.

“Our class of 2017 have contributed to Rugby League enormously and it’s comforting to know that they will continue to do so.”

Fans are encouraged to be in their seats by 6.30pm to see the pre-match entertainment, headlined by Grammy Award-winning artist Macklemore, who will sing five of his biggest hits. The National Anthem will be sung by Ricki-Lee.

A spectacular light and pyro show will accompany the performance, in line with the NRL’s theme for the decider: “Let’s Make It Grand.”.

NRL Telstra Premiership Grand Final celebrations will begin in the Sydney Olympic Park precinct outside ANZ Stadium at 11am, with an NRL Fan Zone offering merchandise, family-friendly activities and live entertainment.  Restaurants, cafes and bars will open for extended hours pre and post-game.

Limited tickets are available for the Grand Final via nrl.com/tickets

Every fan who attends the event will also receive a limited edition ‘47 Telstra Premiership Grand Final cap. The one-of-a-kind cap is only available to ticket purchasers.

Fans are encouraged not to purchase tickets from unauthorised resellers including Viagogo and Ticketmaster Resale.

A Marketplace for Fans has been set up for the Grand Final via nrl.com/tickets The service enables patrons and purchasers the opportunity to buy and sell tickets in a secure and guaranteed environment.

The 2017 NRL Telstra Premiership Grand Final is supported by the NSW Government, through its tourism and major events agency Destination NSW.

Direct train services from Central to Olympic Park will run every 7-8 minutes from noon, stopping at Redfern and Strathfield. For fans coming from the west, express services will run from Blacktown every 10 minutes and from Penrith and Parramatta every 30 minutes from 12.30pm.

Sydney Olympic Park Major Event Buses begin running from 11.50am and 12.30pm depending on the route.

Fans are reminded to keep their tickets for the return journey, as customers must have a valid ticket when travelling on public transport.

A high NSW Police and security presence will be in place. Fans are asked to leave additional time for the security screening process when entering the Stadium. This process will include mandatory bag searches and personal checks.

Only small bags (no larger than 30cm x 40cm) are permitted into ANZ Stadium for events, and all bags will be checked by security. Fans should arrive without bags if possible.

Fans are also reminded that Daylight Saving begins in NSW on Sunday when clocks go forward one hour at 2.00am. 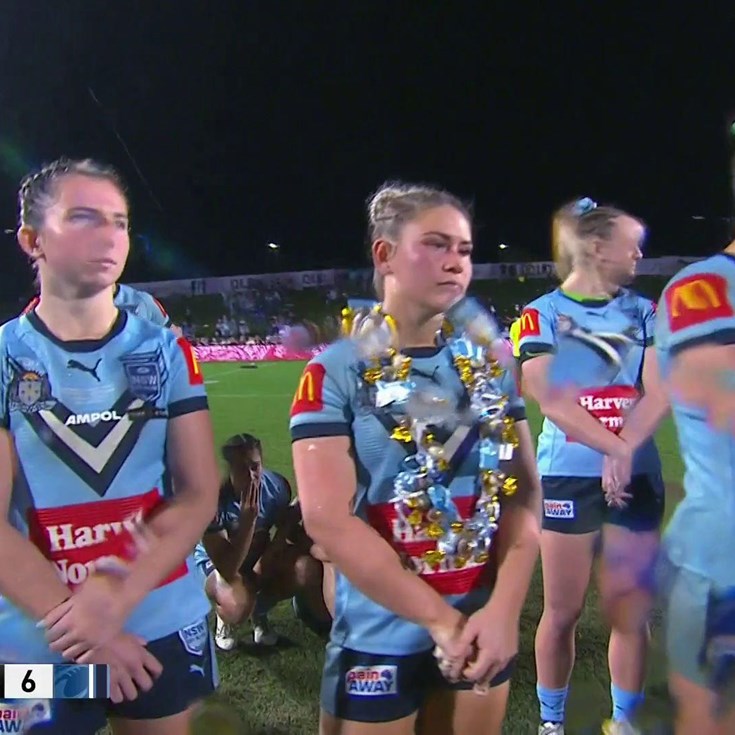 Brigginshaw takes to the stage to raise the shield