The Melbourne Storm confirmed their status as one of the greatest teams in rugby league history with a flawless 34-6 dismantling of the Cowboys to send departing halfback Cooper Cronk out as a two-time premiership winner.

Storm are simply the best

Comparing teams from different eras will always generate plenty of hearty debate, but there is enough evidence to suggest this current Storm team is the best of all time. St George won 11 premierships on the trot – a record that'll never be matched – while the Broncos and the Raiders had some amazing sides in the early 1990s. However, this Storm side is on another level. The salary cap scandal of 2010 was meant to decimate this squad; instead it galvanised them. With Cameron Smith, Billy Slater and Cooper Cronk at the core, coach Craig Bellamy built a squad that lost just four matches in 2017 – two of those without their State of Origin stars – and finished the season on a 10-game winning streak. They held the Broncos to nil in the preliminary final and raced out to an 18-0 lead on Sunday despite going 58 minutes without a penalty. Their wingers are elite finishers, they have the best spine in the world and their forwards bully opposition packs on a weekly basis. They might lose a few players next year but take time to appreciate what they achieved in 2017.

They played their first game together back in 2004 and on Sunday night the greatest trio in NRL history was finally broken up; but not without one last virtuoso performance. What Cameron Smith, Billy Slater and the departing Cooper Cronk have done for rugby league in Melbourne is almost indescribable and it was fitting that the Storm were able to send their on-field general out on a winning note. In their 232nd match together, the greats of the game notched their 170th win with all three playing their part. Smith controlled the ruck, Cronk dominated with his right boot while Slater was a constant threat in attack. The final three minutes of the first half were a perfect reflection of their careers in purple with Smith making a half break out of dummy-half, Cronk earning a repeat set with a lethal grubber before Slater crossed for the clincher off a short ball from his halfback. They then combined with a typical out-ball, in-ball set play to set up Josh Addo-Carr for his second of the evening. If nothing else, Sunday night proved there are fairytales in sport.

When Josh Addo-Carr left the Wests Tigers in 2016 to join the Storm, people questioned whether he would even get a run in first grade to replace the departing Marika Koroibete. 'The Fox' told NRL.com in the pre-season that he had several lofty career goals and that the Storm were the best team to help him achieve them. Not many people believed him; except Melbourne coach Craig Bellamy. Addo-Carr bought into the Storm philosophy from the get-go and was rewarded with a stunning season that had him tipped to be one of the key game-breakers on Sunday. It took just 20 minutes and one opportunity for him to create something out of nothing as the speedster latched onto a Will Chambers pass and let his feet do the talking to open the scoring on the back of his league-best 26th line break. Players can spend years working on defensive reads and sweep plays in attack, but when you've got a guy like Addo-Carr in your team sometimes it's best to just let him do his thing.

It was meant to be the biggest day of his rugby league career but Shaun Fensom's maiden NRL grand final ended in tragedy just four minutes into the contest after the universally-loved workhorse sustained a serious lower-leg injury in a case of friendly fire. Nine years after he led the Raiders to a famous golden point victory in the inaugural NYC grand final, Fensom – in his first season at the Cowboys – was meant to be one of the fairytale stories of Sunday's decider. Instead, his evening never got going after he was stretchered from the field in a medi-cab after he was collected accidentally by a teammate as they attempted to tackle a rampaging Jesse Bromwich. It took several minutes for medical staff to help him off the field with the veteran clearly in agony. Fans took to social media to show their support, and in an incredible display of strength Fensom responded to the crowd's standing ovation with a gutsy thumbs up and a wave of the hand to encourage Cowboys fans to make some noise. Thoughts are with him to make a speedy recovery.

He's bent defensive lines back like no one else in 2017 but on Sunday night Cowboys enforcer Jason Taumalolo met his match in the form of Melbourne's brick wall ruck. The Kiwis lock has run for over five kilometres this season and has dominated this finals series with three hauls of 200+ metres but he couldn't replicate that form with just 68 metres in the first half. That trend continued in the second stanza with Taumalolo finishing the match with 104 metres – easily his worst return of the season. It wasn't where the game was won or lost, but limiting the game's best metre-eater went a long way to sealing the deal. 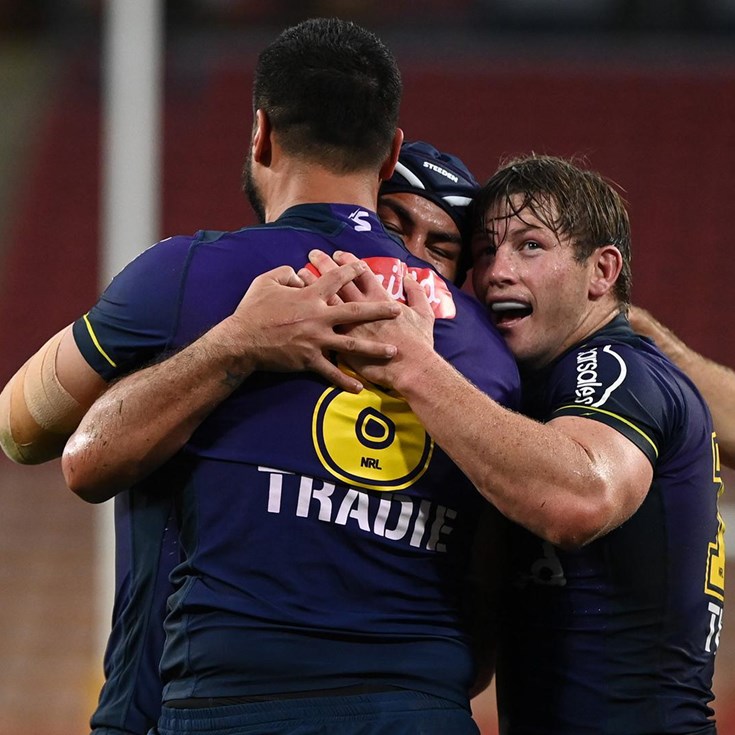 Papenhuyzen slots a field goal to seal the win

Sorensen takes matters into his own hands

Storm destroy depleted Panthers to smash for and against record

Naden gets the first points for Penrith