England winger Jermaine McGillvary owes his place at the Rugby League World Cup to Newcastle Knights coach Nathan Brown after giving up the football dream he now lives through watching his son play for Manchester City.

McGillvary, whose seven-year-old son is a talented prospect for the Premier League giants, was also a promising soccer player and captained Emley FC Under 19s at the age of 16, while also playing a handful of first grade matches for the Huddersfield Town feeder club.

However, work commitments got in the way of training and after quitting football McGillvary took up rugby league, which he had played at an earlier age.

Determined to play alongside his cousin Leroy Cudjoe at Hudderfield Giants, McGillvary later gave up his bricklaying job too and lived off a job seeker’s allowance of GBP 24 per week to focus on rugby league.

“I had to pay my mum board and stuff like that so I was at a real crossroads in my life where it was make or break, but the sacrifices I made then have paid off,” McGillvary said.

He also had to endure a loan spell with Batley Bulldogs in the Championship before Brown’s arrival as coach of Huddersfield in 2009.

“If it wasn’t for Nathan Brown I wouldn’t be here today,” McGillvary said.

“He is one of the biggest influences on my career and taught me just basic things, like catching a ball.

“When I made my England debut [in 2015] he was back in Australia and I got his number, rang him and said thank you very much. Hopefully he comes to one of our games or we cross paths because I thank him, not just for what he has done for my but my family.

“Without that we wouldn’t have the stuff we have now and I wouldn’t be playing on the biggest stage in the world.”

McGillvary was voted England’s player of the match by team-mates and fans after last Friday night’s World Cup opener against Australia in Melbourne but it was the congratulatory message from Isaac that meant the most to him.

“He was on the bus on the way down to London with his team and watching the game on his grand dad’s phone,” McGillvary said. “He said well done, he said it was unlucky that we didn’t win but he sent me a good message, him and his brother.

“I was going to bring the whole family out here but he has had a lot of games this weekend - they played Chelsea and against Charlton too - so I didn’t want to interrupt him from that and his school.”

Isaac trains at the GBP200 million, state of the art City Football Academy, which is based next to the club’s home ground in Manchester, and plays above his age group.

“I have been to St George’s Park, I have seen videos of the set-ups at Ajax, Milan and Chelsea but they have picked the best of everything across the world and put it into that complex so those boys have got better facilities than I have ever had,” McGillvary said.

“He is well looked after, they do good by him and he loves it. That is all I want to see, I said to him I don’t care how good you are I just want you to be happy and if you are enjoying yourself you will be the best you can be anyway.”

As for his own football career, McGillvary was a semi-professional for Emley but when work commitments interfered with training he could no longer play.

“I was 16, I was captain of the Under 19s team and I got to play first team three or four times but you had to go to training or you didn’t get paid so I had to make a choice,” he said. “I live my football dream through my son now.”

This article first appeared on RLWC2017.com 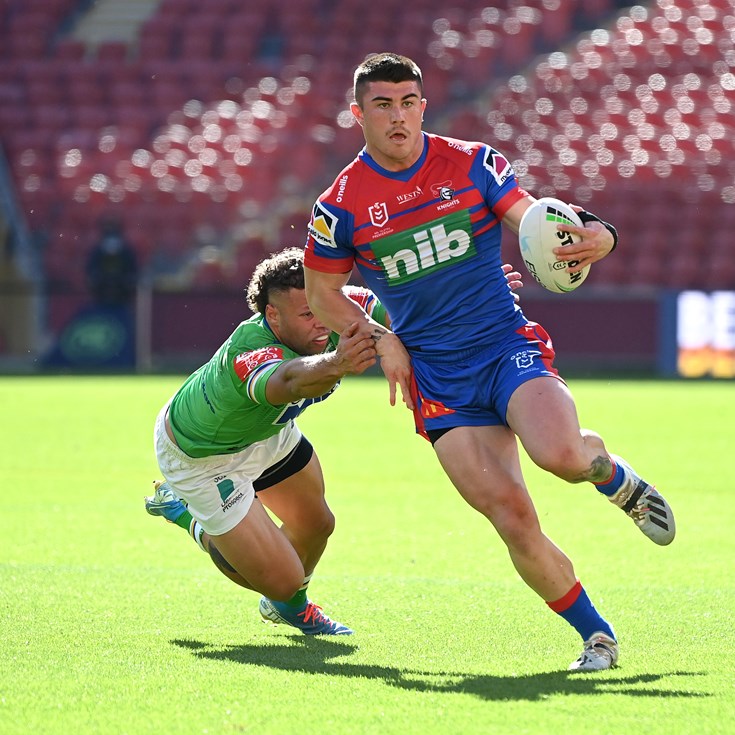 Guler charges over late for Canberra