An extraordinary six players who will line up for Australia in the World Cup final all represented Norths Devils in the Queensland Cup, including three of the greatest footballers ever to lace a boot.

The premiership winning Melbourne Storm quartet of Cameron Smith, Billy Slater, Cooper Cronk and Will Chambers all wore the Devils jersey, as did Broncos duo Josh McGuire and Matt Gillett.

The stories and links to Norths of the above-mentioned stars are all varied and NRL.com spoke to former Kangaroos half Mark Murray about them.

Murray was a Norths CEO, recruiter, coach and mentor for 15 years.

Let's start with number one, Billy Slater, who drove for 18 hours from Innisfail to a Norths trial off his own bat to get his start.

"Billy was unique in that the other guys (Smith and Cronk) came to us through our recruitment system but he was a triallist who rang us," Murray said.

"Being resourceful as he is, Billy drive an old beat-up Mazda down with his cousin from North Queensland for a trial."

He trained on Friday, trialled on Saturday and the rest is history.

Slater already had accommodation and work sorted out for himself.

"The most impressive thing about Billy at the time was his independence," Murray said.

"Towards the end of his first season we offered him a Storm deal and away he went."

Smith had played in the under-17 Queensland trial and missed out on making the side despite being judged by Anthony Griffin, who was working at Norths at the time, as the best player of the carnival.

"So we signed Cam anyway to Norths on a Melbourne deal," Murray said.

"The thing that impressed me about Cameron from the start was his calmness, his composure and the fact that he never had a bad game. As a young fella I saw him have lots of really good games, lots of better games but never a bad one. He has maintained that standard throughout his career.

"Cronk had been selected in a Queensland Schoolboy rugby union side and we had a guy who taught in the system who recommended him to us.

"He was a fullback/centre in rugby and we always liked his attitude and skill level. He wandered around between fullback, five-eighth, centre, hooker and lock for Norths, but never played halfback until he got to Melbourne."

‌The trio all played Queensland Cup under the coaching of Terry Matterson at various stages, who was coach of Norths in 2001 and 2002.

Murray said he and Griffin were working at Norths for the Storm when the famous 'Big Three' were recruited.

"We set up the development and recruitment base at Norths on behalf of the Storm and it was a really good win-win for both clubs," Murray said.

"Norths had struggled for a lot of years and didn't, and probably still don't, have a lot of finances. The Storm had an immediate need to have a development pathway because the state of rugby league in Victoria wasn't ready for this level of footy at the time, and they needed somewhere for their players who weren't being chosen in the top 17 to have a competitive game."

Chambers was a Storm signing in the first instance and was placed in the Norths system to hone his skills for several seasons.

McGuire was a Norths junior with the Aspley club who was signed by the Broncos and played Queensland Cup at Norths to develop his game.

Matt Gillett got his start as a Bribie Island junior who also played some footy at Redcliffe. Murray said he had tried to sign him earlier a couple of times for the Storm, before he was called in by Griffin to the Broncos under-20s.

Gillett drifted out of that system and joined his mates to win a competition with Wests Panthers in the QRL's under-20s and was then signed by Norths.

"That was with the idea of getting him into the Broncos system because by that stage we had left the Storm and joined Brisbane," Murray said.

"Matt played with us, was our player of the year and then went to the Broncos and hasn't looked back."

It is worth considering that if former Norths star Greg Inglis had been fit he would have been the seventh former Devil in the side to take on England.

It won't be the Magnificent Seven but the Super Six former Devils will play a key role in deciding the outcome of the 2017 Rugby League World Cup final. 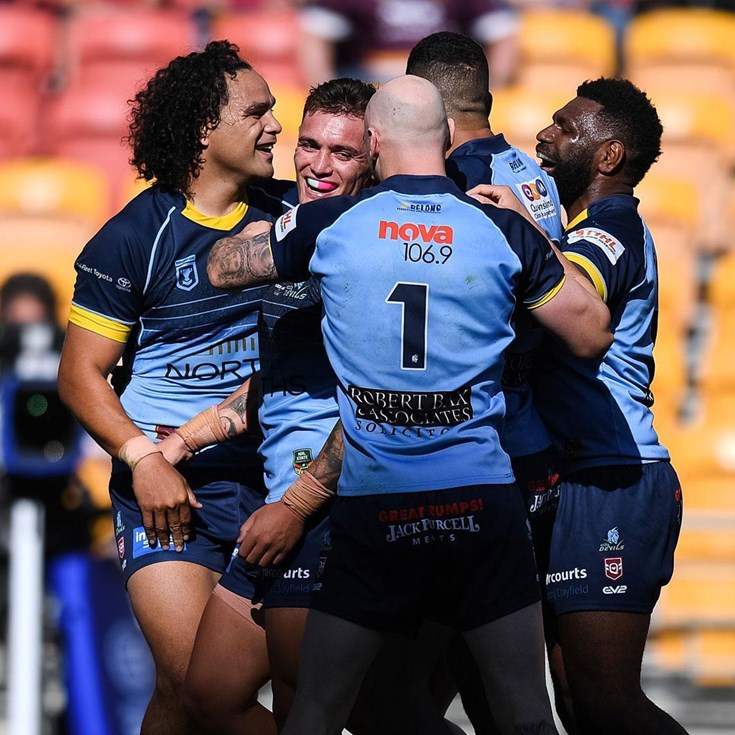 Luke Page finishes career with a shot at goal

Rowe scores on the siren for Burleigh

Rowe puts Sauiluma into a hole on the left edge