No disrespect but Cronulla co-captain Paul Gallen doesn't really care that it is Johnathan Thurston's 300th NRL game on Friday night, when the North Queensland Cowboys face the Sharks in Townsville.

Gallen is already in the prestigious '300 Games Club' but he lost that milestone match as the Sharks went down 32-10 at Suncorp Stadium to the Brisbane Broncos in round 23 last year.

His indifference is also not because it was the Cowboys who knocked out the then-reigning premiers Sharks from the 2017 Telstra Premiership finals race four weeks later, by the slimmest of margins 15-14.

"It's got nothing to do with us," Gallen said.

"Obviously, Friday's game has got a bit of hype around it. He deserves that because he's been an icon of the game for such a long time," he said on the eve of the Sharks departure on Thursday for the tropics.

"All the fuss he deserves, but for us we're not up there to try to spoil JT's 300th. We're up there to win a game. We'll do what we do and if we play to our potential, we give ourselves a chance."

He won't deny there is still that itch there that can never be scratched. The Sharks, finishing fifth after 26 rounds, were red-hot favourites going into the qualifying final against eighth placed Cowboys.

"It still burns a bit but it's not fuel to any fire (this year). It's a totally different season, a different side in some areas for us, a different focus," Gallen said.

"We don't go back to that game or use that game as motivation. Certainly at the end of my career – which I'm getting towards now – it's a game that may haunt me," he added, remembering the Sharks beat the Cowboys 26-16 in round 24 in Townsville.

"(Qualifying final) was a game that we probably should have won as I won't change my mind on there being a couple of decisions there that weren't correct. That's what happens in a game of footy sometimes, and we've moved on.

"The worst thing is you can't go back," said Gallen, who has a habit of qualifying his statements as the emotion rises in his voice.

"… maybe when I am retired and sitting in the pub one day I'll look back and be kicking myself about it."

But his mood hardens a little more when asked if he wants a farewell tour like Thurston – there's still time to make the announcement that 2018 will be his so he can ride that nostalgic wave for a whole season.

"I haven't even kicked a ball or played a game this year. I've said the same thing for a while now – let's just wait and see. I've been asked this question for 12 months now," Gallen said.

"I'll see how the year goes, how the body goes. Last year was good and that's why I'm here again.

One thing might sway him to retire - or at least delay the decision - is to see how the 2018 season pans out for the Sharks and whether they can win the premiership again.

"I've got no plans on when I'm going to make that decision on what I'm going to do. Last year, the decision well into the season.

"Obviously, it would be nice to go out on a grand final win - that would be the ultimate.

"You can't predict that obviously so see how it goes."

The first six rounds don't look like much fun. Cronulla faces both last year's grand finalists in Cowboys (round 1) and premiers Melbourne Storm (round 4),  alongside top-eighth teams Parramatta and the Sydney Roosters, and arch-rivals St George Illawarra twice (round 2, 6).

"I don't think it's a bad thing to be honest," Gallen said of the tough opening six weeks.

"Hopefully, we start the year well and maintain it throughout, then finish well.

"I don't wish we had a different draw. The draw we've got is fine."

There have been so many high-profile personnel changes – his former Australian teammate Cooper Cronk the Roosters and one of his best mates Mitchell Pearce to the Newcastle Knights. But Gallen isn't excited about seeing how any one team in particular might go.

"I'm not looking forward to any match really. Whoever we play is the enemy that week and we'll prepare as best we can. We want to beat them no matter who they are or where they are on the table." 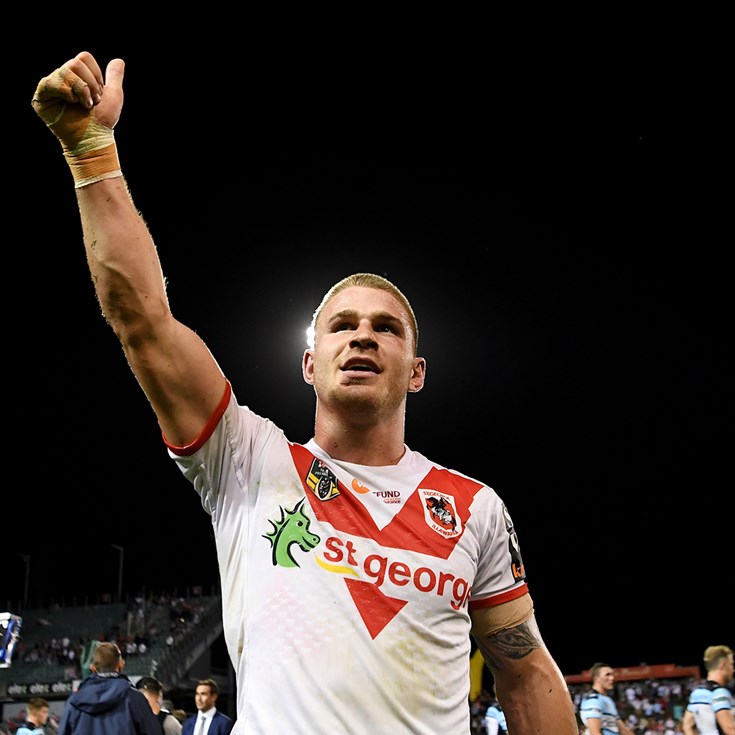