Garth Brennan was given the most traumatic welcome to the NRL any coach could imagine when his Gold Coast Titans came from 18-0 down to beat the Canberra Raiders 30-28 in the rain at Cbus Super Stadium on Sunday night.

But he left his first match glowing about the character of his players after they recovered to snatch victory with a Konrad Hurrell try from an Ash Taylor grubber with less than two minutes on the clock.

The rookie mentor wanted the youngest halves pairing in the Telstra Premiership to take control of their team and the end result was Taylor and his partner Kane Elgey creating all five Titans tries.

After completing at just 53 per cent in the opening half and conceding four soft tries, the Titans completed 19 of their 21 second half sets with Taylor and Elgey becoming more dominant as the game wore on.

The Raiders, who bullied and out-muscled their opponents in the opening clashes, would be devastated at how the game got away from them after leading 24-12 at half-time.

It took just three minutes for the Raiders to get on the scoreboard with a soft try from dummy-half by hooker Siliva Havili. Jarrod Croker converted for 6-0 and the Raiders were certainly winning the early battles.

Less than five minutes later Canberra were in again after running the ball to the left on the last tackle. Blake Austin, who began the match at five-eighth with Aidan Sezer dropping to the bench, gave Jack Wighton some space outside Ash Taylor and he beat Taylor to score.

Brennan’s welcome to the NRL quickly grew with nightmare proportions when, four tackles after the kick-off, Raiders halfback Sam Williams dummied past Leilani Latu and gave Elliott Whitehead a free run to the goalposts. Croker's conversion made it 18-0 after 11 minutes.

A shift to the right in just the Titans' third set with the ball produced their first try of the season after Taylor tipped on to Kevin Proctor on the right near the try-line and Proctor crashed over.

Hurrell provided his first moment of inspiration for the season when he took the ball up shortly after the kick-off and steamrolled Croker, forcing the Canberra captain off for an HIA.

Gordon provided the next uplifting moment for the Titans when he saved a try soon after.

But the Raiders went further ahead when prop Junior Paulo scored a soft try, with Sezer's conversion extending the lead to 24-6.

However, the Titans halves put their team back in the match five minutes before the break. After Gordon was held up by good scrambling defence, Taylor grubbered to the left for Elgey, who showed good determination to bump his way through the line and win the race for the ball.

The Titans had all the ball at the start of the second half, with three repeat sets due to penalties, and it was Taylor again who made the Raiders pay.

The ball was shifted to the left and Taylor grabbed an awkward ball at his ankles and managed a cut-out pass to winger Phil Sami who scored inside the left corner post.

Gordon’s touchline conversion made it 24-18 and suddenly it was ''game on'' with just over half an hour remaining.

Incredibly, the Titans drew to within two points, this time Elgey providing the spark with a wonderful lofted cut-out ball to centre Dale Copley, who twisted free of a tackle to score out wide.

Gordon missed the conversion but the Titans tied it up soon after with a penalty goal right in front of the posts and the small Gold Coast crowd drew voice.

Former Titan Sezer went within centimetres of scoring but good contact in the tackle from Ryan James saw him reach out and be just short of the line.

However, in their next set the Raiders were back in the lead.

An excellent cross-field bomb from Austin found Jordan Rapana, who tapped the ball back and Leilua brilliantly gathered the ball around his knee and scored in the corner. Croker missed the goal for 28-24.

But the Titans weren’t done.

With time ticking away, Taylor grubbered to the right of the posts and Hurrell picked up the spills to score under the posts and secure a remarkable victory. 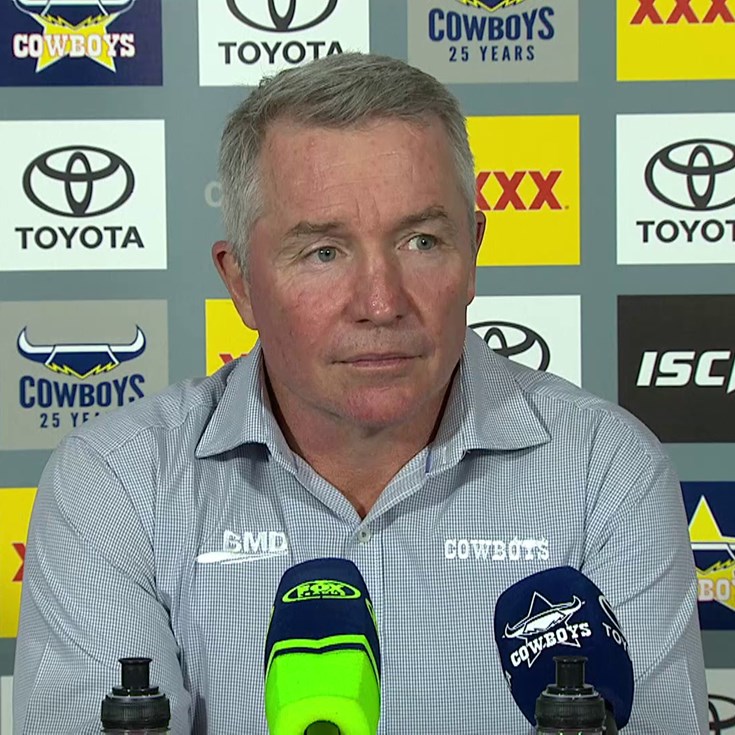 Feldt finishes it off for the Cowboys