It's a 2016 grand final rematch as the Cronulla Sharks go head-to-head against the Melbourne Storm.

The Storm returned to the winners circle after a round three victory over the Cowboys but will be sweating on the fitness of Kenny Bromwich. The Sharks meanwhile are off the mark for 2018 after defeating the winless Parramatta Eels last week, but face a step up in class here.

Key match-up: Billy Slater v Josh Dugan. The Storm fullback bounced back against the Cowboys after a below-par game and will be keen to out-point his Australian team mate. Dugan is not as pacey as Slater but his organisational skills in attack will help the Sharks' less-experienced back line.

For the Storm to win:More of the same from last week: weather the early onslaught and get them in the second half. Jesse Bromwich and the forward pack dominated the revered Cowboys front row and will have to contain Andrew Fifita in particular.

For the Sharks to win:Everyone needs to play well and they have to score points. The Sharks only average 14 points per game so far in 2018 and mayneed double that on Friday night. Valentine Holmes has got to get more involved because his speed can worry the Storm. Fifita has to put in a barn-storming shift.

Storm Stat Attack:The Storm opened up the Cowboys last week with 39 tackle breaks and six line breaks. Adding in 16 offloads and Melbourne were too fast and strong against Matt Scott's side. Expect more of the same as the Storm build through their season.

Sharks Stat Attack: Cronulla's back three were penetratingly-good last round with 223 kick-return metres against the Eels' 97. The Sharks also gained an advantage in post-contact metres with almost 200 more than the Brad Arthur-coached side.

And another thing: The Sharks have relied on defence to win their last three against the Storm. The scorelines have been 11-2, 14-12 and 14-6. Another battle up the middle beckons.

The prediction: Storm by 10.

Josh Dugan is a late withdrawal from the Sharks side. Valentine Holmes will move to fullback, with Edrick Lee to start on the wing. As well as Dugan, Kurt Dillon dropped out of the squad an hour before kick-off. Matt Moylan will miss a second-straight match with a knee injury, with Trent Hodkinson (No.19) to start at five-eighth for a second-straight week. Luke Lewis replaces Jayson Bukuya (groin) in the second row. As well as Moylan, Braden Uele was dropped from the squad 24 hours out from kick-off.

Young Tonumaipea and Patrick Kaufusi were dropped from the Storm squad an hour before kick-off. Kenny Bromwich and Ryley Jacks are the two players dropped from the squad 24 hours out from kick-off. Brandon Smith may take Bromwich's spot in the final 17. 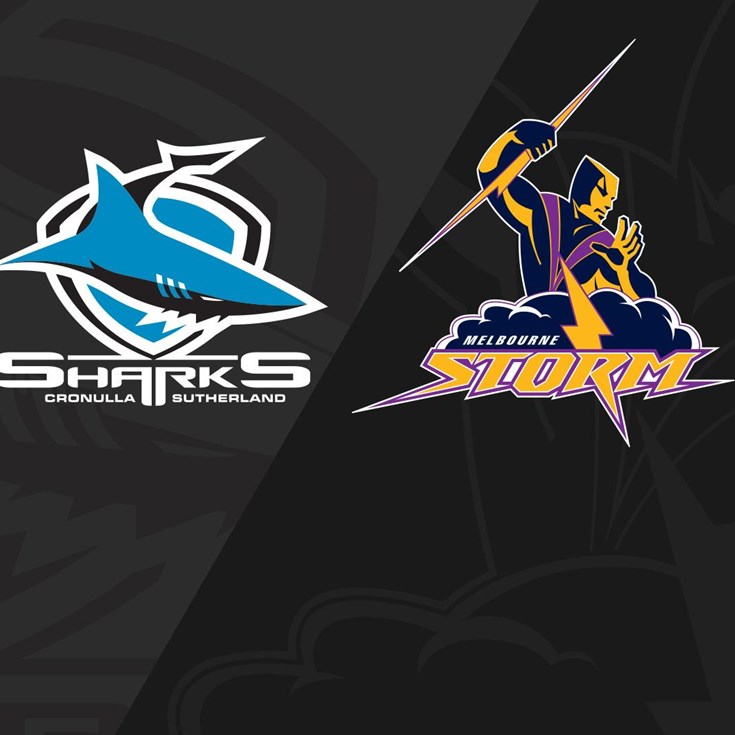 Sharks score hard-earned win over Storm as penalties pile up

Smith sent to the sin bin

Ramien sets up Lee to get Sharks going