It's been the running joke in rugby league circles for years, that Cameron Smith is the best hooker, and referee, in the game.

Plenty of fans have been upset about his influence on a game, specifically just how much power he supposedly wields over the whistleblowers.

Now, after four rounds of football, Smith sits atop the leaderboard as the most penalised player in the game.

Nine penalties conceded in four games – unheard of for Smith. That's three less than he conceded in 2017. It's three times as many as he has averaged the past five years (80 penalties in 120 games).

And don't forget the first sin-binning of his career over the weekend that was met with the biggest celebration from a Sharks supporter group since Paul Gallen lifted the trophy at ANZ Stadium on grand final night in 2016.

As a club, the Melbourne Storm have copped their fair share of criticism, often from opposition coaches, for a perception they get away with more than others. That they bend the rules best, especially in defence.

Yet the Storm haven't whinged. Melbourne coach Craig Bellamy has actually been understanding of the situation, refusing to give his team any excuse other than the fact they simply haven't been good enough in two of their losses this year.

Yet the outrage continues despite years of fans calling for something to be done in protest to how the Storm juggernaut just keeps rolling on.

So the referees are ruining the game, apparently. Diluting the spectacle. But there's also an argument the spectacle has been slowly diluted for years and this course of action is simply a bid to take control away from the coaches, who have turned the game into a mathematical equation driven by percentages and statistics.

It's a ploy to put the entertainment factor back in a business-minded industry, with complete knowledge of how un-entertaining the product may be in the short term.

"Some people are asking for the referees to clean the game up and then when there are all these penalties they are whinging about the spectacle of the game," Smith said at the Holden State of Origin series launch in Melbourne on Tuesday afternoon. "Which one is it? Do you want to clean up the game or less penalties? There can't be both."

The game has become a sequence of almost identical block plays and the same one-out predictable football. An unwillingness to try anything outside the box in fear of not reaching the percentage of completed sets coaches believe will yield two competition points.

For some, only Origin, finals and matches that include their fantasy players evoke genuine excitement – and the game's hierarchy wants that to change.

The Competition Committee met in November. It's at this meeting, the edict which we've seen enforced during the opening month of the season was developed.

Neither Green nor Cleary have been critical of the state of game. In fact, the Cowboys are the least penalised team in the Telstra Premiership and the Tigers aren't far behind.

"I think the ruck was a debacle," Green said.

"It had to be cleaned up. It was a point of difference for our game between us and rugby union. One of the first things we spoke about [at training] was the 10-metre penalties.

"Coaches will start getting onto their players about conceding easy penalties and I think once everyone finds their rhythm from that point of view, the game will open up and be a better product. They've got to stay consistent with it. The rules haven't changed, they've just started enforcing them."

Granted, coaches are held to far higher standards than ever before. There are only a few coaches who aren't five straight losses away from being threatened by the axe. They are constantly fighting to save their livelihood.

So you can't blame them for looking at ways to exploit the rules to gain any advantage, regardless of how minor.

Like the advantages of having a set defensive line when defending their try line. Like the split-second they gain from players rolling the ball back in the play-the-ball instead of using their feet.

On some occasions it's the difference between a set defensive line and a retreating one.

The referees have been guilty of folding within weeks during previous so-called crackdowns. The coaches thought it would be the same this time around.

But the tricks of the trade have been somewhat exposed over the off-season with former South Sydney coach Michael Maguire advising and overseeing the referees' program, and NRL chief executive Todd Greenberg unreservedly supporting the referees in their bid to add some spark to a game in need of a shake-up.

The best coaches do it better. They adapt to the rule changes and look for ways to benefit them – like they did when the strict concussion protocols were introduced a few years ago.

One of the best examples of exploitation was in 2012, when Bulldogs coach Des Hasler used a sweeping Ben Barba to great success on their way to a grand final.

Barba had plenty of joy receiving the ball on the inside shoulder of a block runner, often invisible to opposition defensive lines as he swept around the back to link with his outside backs.

NRL officials then changed the rules. They implemented black and white rules to stop it from happening, and some coaches began to instruct players on how to milk penalties.

For so long the coaches have held the power. Everything the NRL did, they had an answer. And rightly so, it's their job to exploit loopholes.

So Greenberg, together with the rest of Competition Committee, decided in the off-season to take the necessary and sometimes excessive measures to swing that balance of power.

The crackdown on Smith, once deemed a protected species by some pundits, and his team, shows just that.

Very few fans want to see what we saw at Southern Cross Group Stadium on Good Friday between Cronulla and Melbourne.

But there's a far greater fear that the game itself is in jeopardy of becoming increasingly boring. The game has shown its hand. The coaches now have the next move.

Sam's timing a split-second off

South Sydney's Sam Burgess used a photo on social media of Jason Taumalolo steamrolling Isaah Yeo to show he wasn't alone in making high contact with a defender after he was charged with dangerous contact on Good Friday.

Needless to say the NRL wasn't impressed with Burgess's attempts to prejudice the judiciary committee given strict rules around commenting on incidents that have been placed on report. Burgess has since removed the Twitter post.

Turns out it was an accidental head clash between Yeo and Taumalolo that led to the Penrith forward's concussion.

The photo posted by Burgess is captured a split second after the initial contact. The Panthers and the NRL have looked over the footage and have come to the conclusion it was a head clash, rather than illegal contact with the forearm, that floored Yeo in the opening tackle of the second half.

Yeo appears to be on the mend. He trained with the team on Wednesday morning and is on track to return for Sunday's local derby clash against the Eels at ANZ Stadium.

As for the Rabbitohs, despite their anger over the two-week suspension to Burgess for his hit on Morris, they won't be appealing.

It's important to note Burgess wouldn't have missed a game if he had a clean record.

Akuila Uate is off contract at the end of 2018 and his manager has approached quite a few clubs about the winger. The Manly Sea Eagles have saved his career since falling out of favour at Newcastle however the salary cap saga hanging over the club's head has put a question mark over the future of a few players.

The Sea Eagles want to keep Uate but won't know what money they have to spend until their appeal is heard. Uate is willing to wait and see what comes of it but he may be the first Manly player forced to find another home if things don't go to script for the Sea Eagles in the coming weeks.

VenuesLive, the management company in control of ANZ Stadium and Perth Stadium, is on the verge of being handed the keys to the new Western Sydney Stadium at Parramatta.

It will provide those clubs locked into long-term deals with ANZ Stadium an opportunity to renegotiate their deals and take additional games to Parramatta. 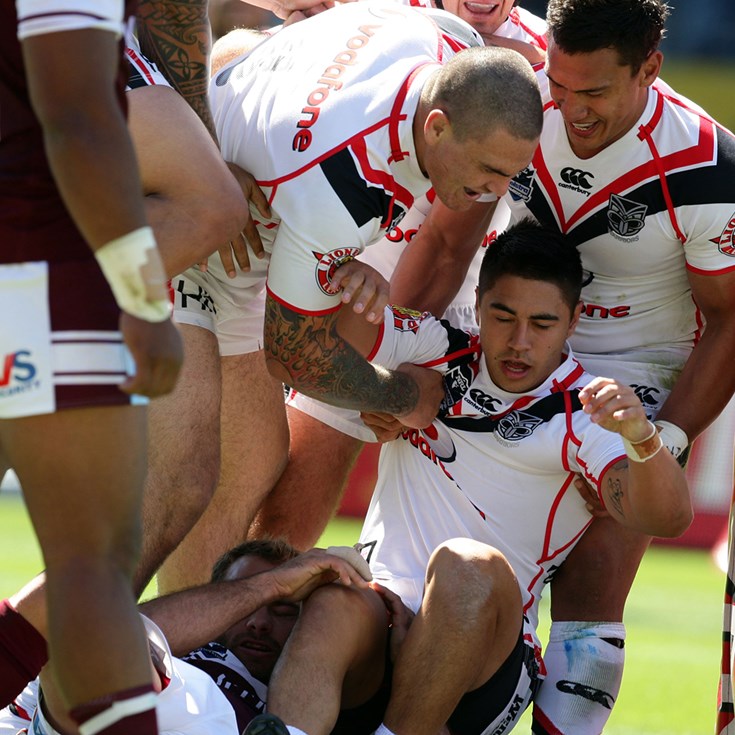