Penrith's Isaah Yeo would like to clear up two issues right off the bat.

Coach Anthony Griffin is highly respected by the playing group and is not being given enough praise for manufacturing the Panthers strong start to the Telstra Premiership season.

The other is that Jason Taumalolo has an extremely hard head.

"His head is a little bit harder than mine obviously," Yeo told NRL.com of his attempt to tackle the North Queensland lock in the 41st minute of the 33-14 win over the Cowboys.

The Panthers second-rower fell to the turf at 1300 Smiles Stadium immediately after impact and had to be assisted from the field by two trainers.

"I wasn't in the greatest way when it happened. But I came around and actually sat on the sidelines the last 20 minutes.

"He certainly came off the back fence and I was watching him. My head is just a little softer than his."

Yeo is no longer seeing stars but he has his sights set on a great season, despite the doomsayers predicting otherwise with local juniors Matt Moylan and Bryce Cartwright breaking contracts to leave the foot of the mountains in the pre-season.

Then fan favourite Tyrone Peachey announced just before round one that he was off to the Gold Coast Titans in 2019.

Fingers were pointed at Griffin's style, which Yeo says was done unfairly.

"He deserves lots of accolades. They were all writing him off after round one. He copped a fair bit of stick," the 23-year-old St Johns Dubbo junior said.

"He's got the absolute and utmost respect from all our players. I can't rap him enough to be honest.

"He's been outstanding while all that stuff was going on in the papers. You wouldn't have noticed anything different with him at all.

"He's a tremendous coach and he has the ability to bring teams together. We're a very tight-knit bunch and that's a lot to do with him.

"He's very approachable and very honest. He's not going to beat around the bush or lie to you and the players respect that. He tells you exactly what he wants.

"At the moment the game plans he's drawing up has us in the top four."

Penrith is third on the NRL ladder leading into round five with a 3-1 record.

The Cowboys win was achieved without leading point scorer and halfback Nathan Cleary.

Up stepped the new combination of James Maloney in the No.7 jersey, Peachey at No.6 with the ever-reliable skipper Peter Wallace at No.9 to run rings around opposite halves Johnathan Thurston and Michael Morgan.

"I thought Jimmy (Maloney) was outstanding, that is his best game for us," Yeo said.

"He probably understands there's more weight on his shoulders how – same with Peter Wallace – to steer us around.

"They both did exceptional jobs. It's exciting times." 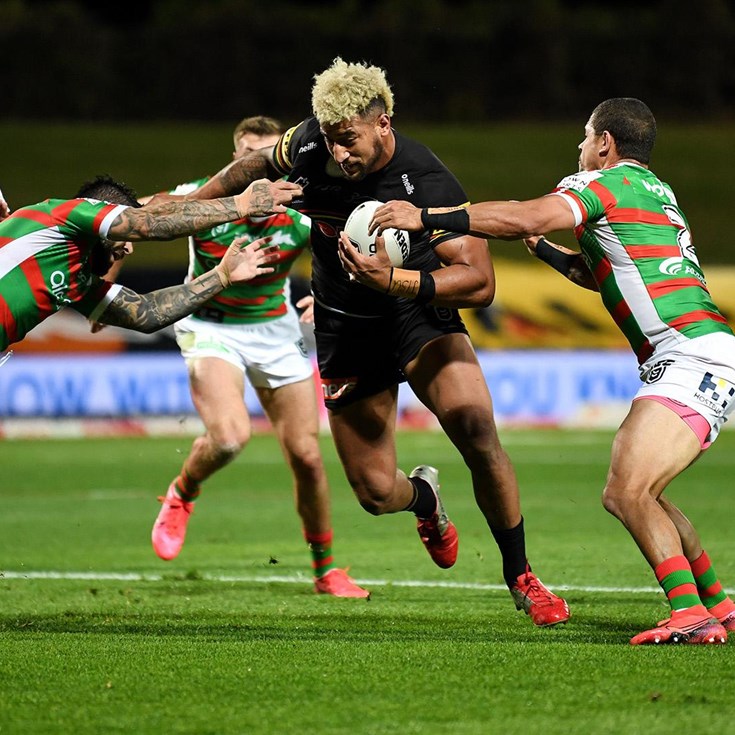 Kikau wants the ball in his hands more

Yeo: Roosters and Eels are the benchmark