South Sydney are laughing loudest in their age-old slanging match with the Roosters after a two-minute horror show from under fire NSW fullback James Tedesco.

The Rabbitohs prevailed 26-14 following a week of social media pot shots from both clubs, but it was multimillion-dollar signing Tedesco who will be the butt of Bunnies jokes for some time yet.

With scores locked up at 8-8 despite Souths dominating the first stanza, two critical mistakes from Tedesco on his own line put it on a platter for the Tricolours' oldest and closest rival.

The first came thanks to unhelpful hands from teammate Reece Robinson, who fumbled a high ball to put Tedesco under pressure in his own in-goal.

As Dane Gagai and Richie Kennar crunched him into the turf, Tedesco spilled the Steeden straight into the path of Angus Crichton for a game-turning try.

When Cody Walker hoiked it high two minutes later, skipper Greg Inglis leapt over a gun shy Tedesco to blow Souths out to an 18-8 lead.

A try to Ryan Matterson returned serve soon enough, but the Rabbitohs kept a late Tricolours fightback in check for their third win of 2018.

Aside from their woes at the back, the Roosters middle men were given a bath by their Rabbitohs opposites after losing Sio Siua Taukeiaho in the warm-up to a knee injury.

Damien Cook in particular had himself a field day around the ruck, clocking up 120 run metres as his bid for the NSW No. 9 jumper gathers serious steam.

Even though Souths enjoyed all the running across the first 30 minutes, they emerged with only an Adam Reynolds penalty goal to show for it.

And despite 22 missed tackles in the previous half hour, it was the Roosters posting the first four-pointer, thanks to a Tedesco break straight through the Rabbitohs forwards.

With that momentum, Latrell Mitchell made it a moment to remember, swatting away Dane Gagai and Alex Johnston in a 20-metre surge to the line, complete with a Cirque de Soleil touchdown in the corner.

It was answered within minutes though by Robert Jennings, who crossed courtesy of a Cody Walker run-around to level things up at the break.

Upon the resumption Crichton was on the board against his future club, before Inglis flew above an out-of-sorts Tedesco two minutes later.

Matterson's 53rd minute try from a Joseph Manu bat back kept the Roosters alive and the Rabbitohs to an 18-14 advantage.

The Tricolours had their chances throughout the second half but never looked like truly seizing them, with Luke Keary and Cooper Cronk especially sluggish with the game on the line.

With another penalty and then Reynolds' sleight of hand piloting John Sutton over, the Roosters were finally put to bed when a 78th minute try to Victor Radley was called back for a knock-on. 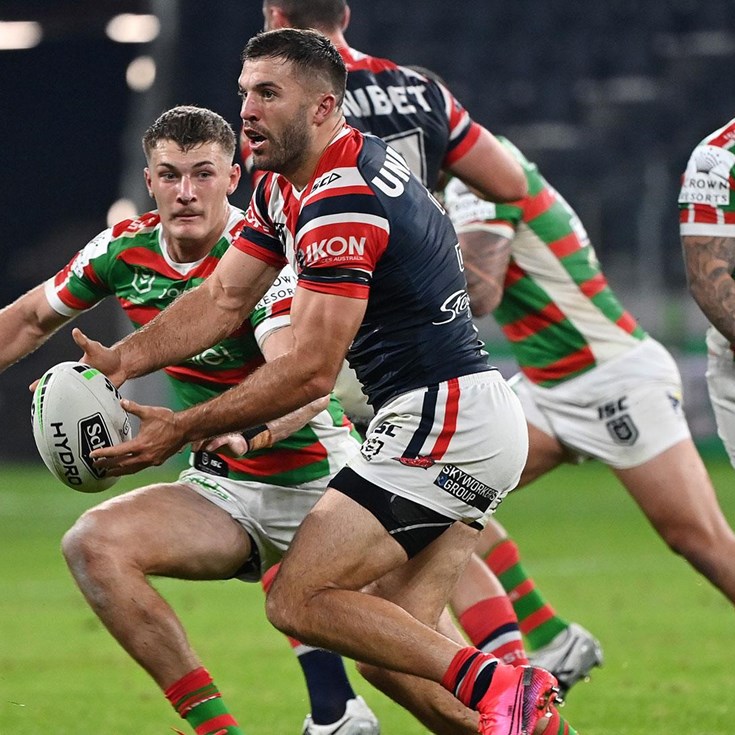 Tedesco stamps class as Roosters open their account in style