Parramatta Eels coach Brad Arthur says star fullback Clint Gutherson isn't haunted by any mental demons after his ACL recovery as he prepares for his comeback against the Raiders in Canberra.

Gutherson's impact from the back has been sorely missed by the Eels as they head into round six without a victory.

Although Gutherson has been physically and mentally ready to return for some time, the Eels cannot rely on his return to turn the side's season around, Arthur warned.

"He's integral to our team and he'll play a big role but it's just nice for him to be back in the team because it's been hurting him watching him the sidelines," Arthur said.

"He's been ready and wanting to play for a while; I haven't seen a person in this situation this focused or mentally prepared as Gutho is.

"Usually [players] carry a few demons with these sorts of injuries coming back but he's had himself mentally ready to play for a long time now."

Despite falling to Penrith 12-6 last weekend, Arthur said he saw enough positive signs that their first win of the 2018 Telstra Premiership is just around the corner.

Gutho to 'spark' the Eels

"Our defence was really good against a side at their best last week and we created a lot of opportunities that we didn't capitalise on, so the game was there for the taking," he said.

The improvement from the Eels has caught the eye of Raiders coach Ricky Stuart, who said he hoped his men weren't catching the men in blue and gold at the wrong time.

"Parramatta have a wonderful team there and I sense they're about to click - let's just hope it's the week after this one," Stuart said.

"Defensively we need to be very good as they have some strike players in attack and two boys back who are very good in attack in Bevan French and Gutherson."

The Eels will be missing one of their forward leaders in Nathan Brown (ankle, round eight), who has been a huge influence on the side early this season, averaging 125 metres from 14 hit-ups a game.

"Tepai (Moeroa), who's probably been one of our most consistent this year will come into that role, he's been playing a bit of back row and a bit of middle, so he's been moved around a fair bit," Arthur said of Brown's replacement.

"And we've still got Beau Scott there, so we've got plenty of experience to cover that spot."

The Raiders are expected to be 1-17 after their bruising victory over the Canterbury Bulldogs last weekend.

Canberra will be further bolstered by the return of demoted stars Blake Austin and Josh Papalii.

Stuart paid tribute to the pair, saying they took being dropped in the best possible way.

"Both Blake and Josh went back to Mounties and played with a very professional attitude and understood the situation," Stuart said.

"Josh on the bench gives us great utility value. He can come on and play on the edge or in the middle."

Saturday night's game is a milestone for the Canberra mentor, as it marks his 350th NRL game as a first-grade coach. 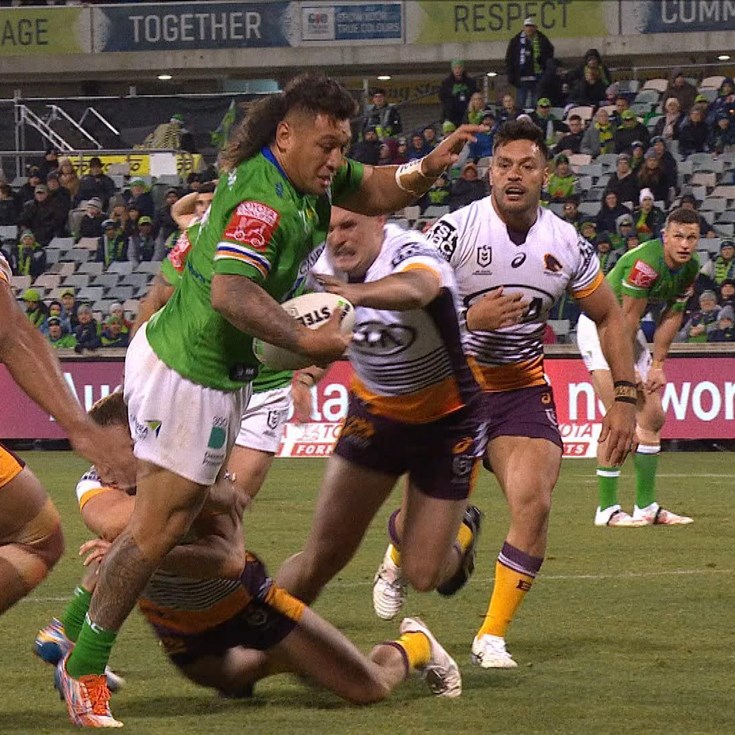 'Copping it on the chin': Papalii out to make amends after ban