Luke Brooks is oozing confidence after his sizzling early-season form and Benji Marshall believes it is the main reason why his Wests Tigers scrum-base partner is ready to grace the Origin arena.

Marshall and Brooks have been dominant in the Tigers' 5-1 start to the Telstra Premiership and the veteran five-eighth is adamant the 23-year-old is a deserving contender for a Blues jersey.

"If he did get that opportunity he'd go great there, he wouldn't look out of place," Marshall said.

"That’s the reward for having success early in the season and playing well, is that you get talked about in those circles and like Ivan [Cleary] said after the game, I think he deserves to be talked about in that arena but at the same time I want him to be great for us and not have that pressure but I hope he makes it because I'd love to see him there."

Brooks, a naturally modest customer, was more reluctant to talk up his representative chances.

"It's always been a dream of mine to play for the Blues," Brooks said.

"But I'm not reading too much into it, I can't control that so I'm just worrying about the things I can control. Things are going to be said but I'm just worried about playing footy here.

"I'm focused on the Knights this week and just doing my job for the team."

Marshall is not the only Tiger backing Brooks with co-captain Chris Lawrence pointing to the difference in Brooks's defence this year and his ongoing improvement in his running game as the major factors in his purple patch.

"It's no surprise, [Luke] Brooksy has a lot of ability and everyone has seen that," Lawrence said.

"He's worked really hard on his defence. That’s probably something people have questioned when he first started but as a young player and particularly a halfback, you're going to get targeted in defence but he's really worked hard on his body physically in the off-season, he's a lot stronger and I think that's really showing in his defence.

"And he's taken his running game to a new level in the last few weeks."

Marshall said he was open to the prospect of playing a 16th season in the NRL in 2019 and would sit down with Wests Tigers officials later in the season to discuss the matter. 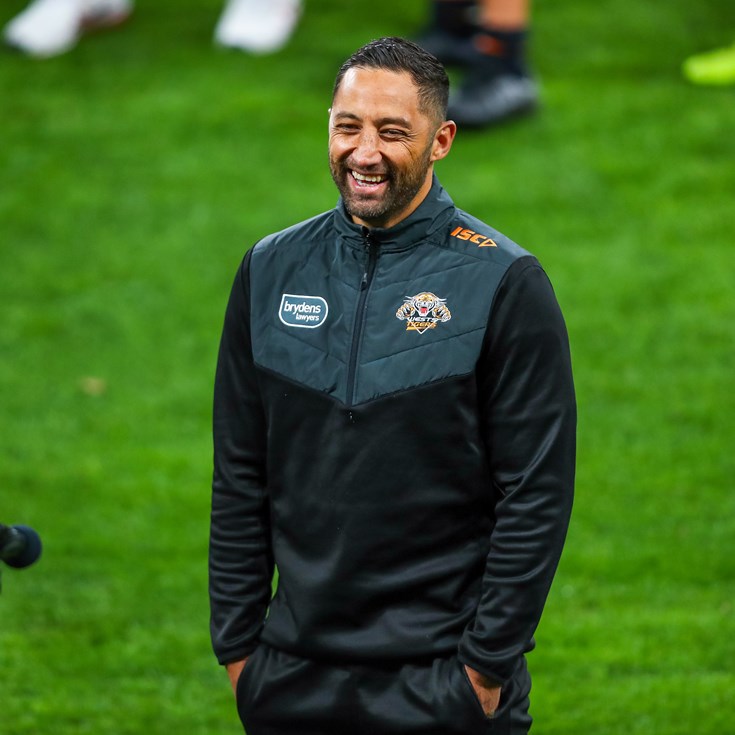 Back in the fold: Benji's new role with Tigers