With rarely seen pluck and without inspirational skipper Jake Friend, the Roosters grinded their way to an absorbing 6-0 triumph over Canterbury at ANZ Stadium.

A week after the Rabbitohs poured through their middle for fun, Trent Robinson's side somehow stole the show despite making an extra 104 tackles than the Bulldogs, who enjoyed a whopping 54 tackles inside the opposition 20-metre zone.

They did so without co-captain Friend, who was concussed and out of the game and left needing stitches after an attempted tackle on childhood friend Moses Mbye.

He did so at the 42nd minute, already with 34 tackles on his tally. By the end of a mammoth 80-minute defensive effort, Ryan Matterson had 65, Boyd Cordner 50 and another five men with north of 30 to their name.

Canterbury couldn't muster a lot with all their ball. They deserved their duck egg in the points column.

But the Roosters couldn't get through their first set without a mistake – one of 17 for the night.

Still they took just five minutes to get on the board, Latrell Mitchell brushing through four would-be defenders with a mixture of brute strength and fancy footwork.

The left-side forays looked the Roosters most likely avenue, but it wasn't until Mitchell was contentiously sin-binned for holding back Kieran Foran that the Bulldogs got a proper sniff.

Even against a 12-man defence though Canterbury rarely threatened, still struggling for the offensive spark that has eluded them for multiple seasons now.

With Mitchell back on the paddock and their defence unblemished, James Tedesco put his frame in the line of fire, scrambling to defuse attacking kicks without the blemishes that handed Souths two tries seven days ago.

The Tricolours saw only some 44 per cent of possession across the first 40 minutes. That number only dropped as the second half wore on.

But with a Danny Fualalo error delivering them to Canterbury’s red zone in the first minute of the second stanza, only a desperate try-saving tackle from Raymond Faitalia-Mariner saw Matterson denied.

As Friend put his head in the wrong position and a couple of stitches were promptly put into it, the Dogs piled on the pressure.

The Roosters didn't help themselves with mistakes coming out of trouble, but constantly dug themselves out of it with desperate defence on their line.

Josh Jackson twice found himself across the white stripe only to be shoved back.

With the clock winding down, the tension inevitably mounted. The mistakes still came from the Roosters, by this point little was landing from the Bulldogs.

And all the while, the Tricolours defence held strong, with a late error from Josh Morris ensuring the two competition points for the away side. 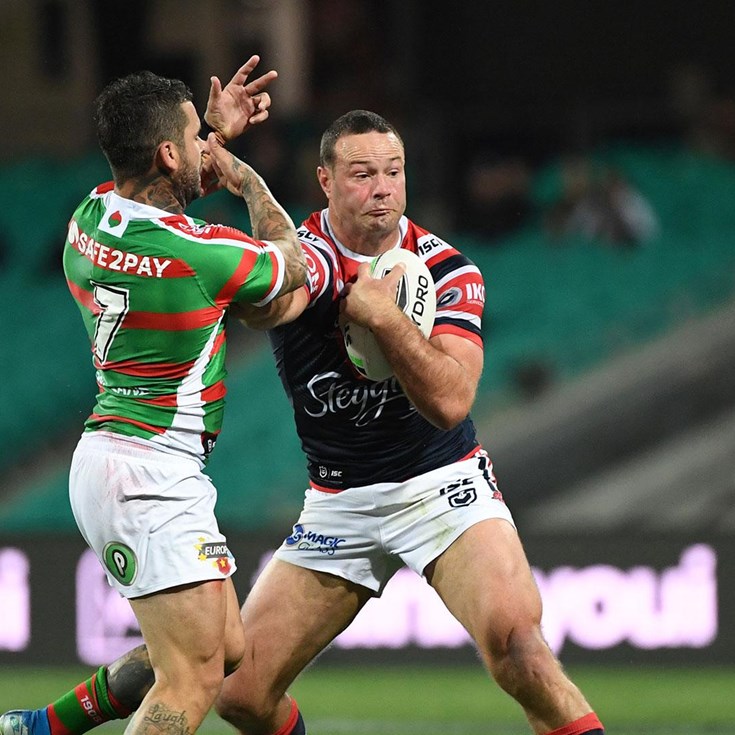 Cordner cops huge hit, gets up and goes again